The US Presidential election has a historical tendency to influence financial markets as a change in leadership often brings a shift in fiscal policy. For the price of gold, there has been greater responsiveness to the macroeconomic landscape change since President Richard Nixon took steps to end the Bretton-Woods system starting in 1971.

However, a look at the historical impact of the US Presidential election offers little evidence of a linear relationship between the price of gold and the outcome based on party affiliation. Bullion struggled under Clinton, while the precious metal traded to a record high price in 2011 with Obama in the White House. The same could be said about Republican candidates as gold prices weakened during the Regan era, but increased during the two terms under George W. Bush.

Efforts to attribute a specific market reaction based on a candidate’s party affiliation is a practice of nuance especially when external fundamental factors like seasonality and economic cycle are taken into consideration. Many contrasting observations can be made from different regimes as financial markets have seen bubbles and crashes during various presidencies.

Nevertheless, one observation to apply to the unique situation of present conditions is that gold prices have become more volatile in the 21st century, and it remains to be seen if the trend will hold for the 2020 election as the economic shock from the COVID-19 pandemic clouds the macroeconomic outlook. 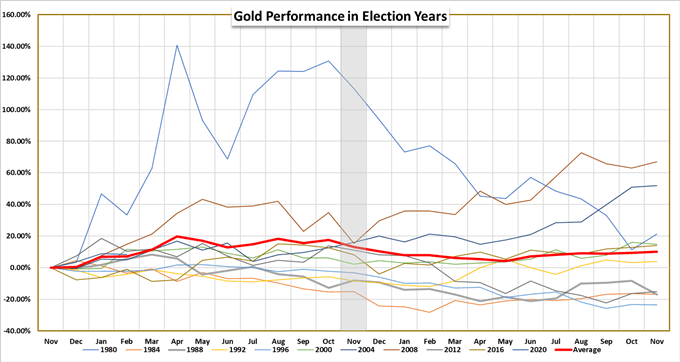 Open a demo FX trading account with IG and trade currencies that respond to systemic trends.

Tracking the performance of gold prices during election years may help to shed some light by looking at the average performance in the year preceding and following elections since 1980. The study reflects the precious metal (red line) rallying at the start of the year, but hitting a peak in the second-half to trend lower in November.

In 1980, the price of gold hit a high of $850 in January as the Federal Reserve under Chairman Paul Volcker was on course to push US interest rates towards 20% to curb inflation, but the advance from the start of the year was short-lived as the precious metal registered the 1980 low ($482) in March. Bullion recovered to trade above $600 ahead of the November 4 election, but consolidated throughout the remainder of the year to hold around $590 ahead of 1981.

In 1984, gold prices briefly traded above $400 in March as the Federal Reserve pushed the benchmark interest rate back above 10%, with Chairman Volcker still at the helm after being nominated to serve a second term in 1983. Bullion gradually weakened over the coming months, with the November 6 election doing little to prop up the precious metal even though incumbent Ronald Regan won a second term. In turn, the price of gold continued to drift lower following the 1984 election to register the yearly low ($308) in December.

In 1988, the price of gold registered the yearly high ($482) in January, but dipped below $400 in September as the effective Federal Funds rate increased ahead of the November 8 election, with the US central bank led by Alan Greenspan, who was nominated by Regan in 1987. The victory by Bush did little to sway gold prices, with bullion trading sideways throughout the remainder the year to end 1988 around $410.