How Societal and Economic Crises Impact US Presidential Elections 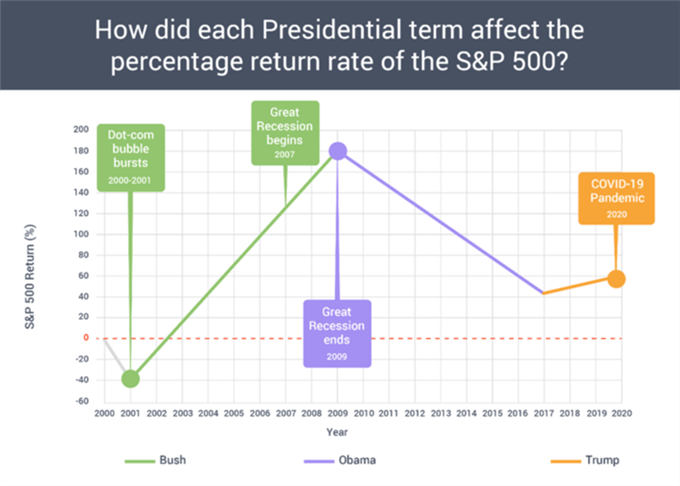 Does a Relationship Exist Between the S&P 500 and the US Election Outcome?

Beyond policies and history, past data suggests that S&P 500 stock can be used to predict the winner of the US election. The S&P 500 Index has an 87% success rate when it comes to predicting the outcome of an election. As per the data, if stocks are higher three months before the election than they were at the beginning of the year, the incumbent party is likely to win.

Stock performance is a key point addressed in the analysis of each presidency. However, given the impact of COVID-19, can the S&P 500 still be used as a reliable indicator? Are we living in an unprecedented time where previous markers of success no longer apply, or has the pandemic brought issues to light that we’ve seen before?

To answer these questions, we need to look at past presidential races and analyze the factors each incumbent inherited, how they addressed them, and the impact they had on future elections. Within the following sections, we examine the conditions each President faced, how they reacted, and what changed during their time in office. This analysis, in tandem with fluctuations in the S&P 500, can provide a base for predicting the 2020 US election.

George W. Bush inherited an economy on the brink of collapse when he became US President in 2001. The stock market was reeling from the dot-com bubble, and the terrorist attacks of September 11, 2001, would trigger a war that not only changed the US but the world at large.

Policies to Correct and Issues that Arose: Tax Cuts and War

President Bush made two significant fiscal moves in response to the stock market collapse in the early 2000s:

The two policies provided relief across the board. However, some analysts have noted that there was key support to high-income households, with the top 1% receiving an effective tax cut of 5% per year.

At the same time that Bush was cutting taxes, he was also directing wars in Afghanistan and Iraq. Following the attacks of September 11, 2001, he authorized the invasion of Afghanistan and, two years later, a second military assault on Iraq. This doubled military expenditure from $300 billion to $600 billion between 2001 and 2008. This increase impacted the US economy and, thus, the S&P 500, but not as significantly as many might assume.

Therefore, it’s possible to say that political changes can be too marginal and temporary to have a long-term effect on the index. While the threat of war does have some impact on the markets, the evidence above doesn’t show an undisputable link between Bush’s military actions and the changing value of the S&P 500. Thus, in purely economic terms, the wars may not have contributed to a decline in public support for Bush.

The Bush Administration in Summary: What Did We Learn?

Although President Bush oversaw one economic expansion, he also presided over two recessions and saw the US debt-to-GDP ratio hit 68%. For investors, it was a shift in speculative fortunes. The stock market when Bush left office was in trouble. Those that stayed the course saw S&P 500 returns drop to -40%.

In looking back over the factors that led to Bush becoming President, economics were the crucial factor. Regardless of how successful his policies were, US voters saw them as a way out of trouble at a time when a major industry – the internet – was collapsing. His response to the 9/11 terrorist attacks was tolerated but may not have been ideal economically or socially. Overall, economic factors were enough to keep Bush in power for two terms. However, by the time his tenure was up, Americans were ready for change.

Just as Bush inherited a fragile economy, President Barack Obama walked into a financial crisis in 2009. The Great Recession had rumbled on for two years, but Obama hit the campaign trail with one simple message: “Change We Can Believe In.” As well as being seen as a contrast to Bush, Obama was vying to become the first black president in US history.

Policies to Correct and Issues that Arose: A Time for Change

The lead up to Obama’s