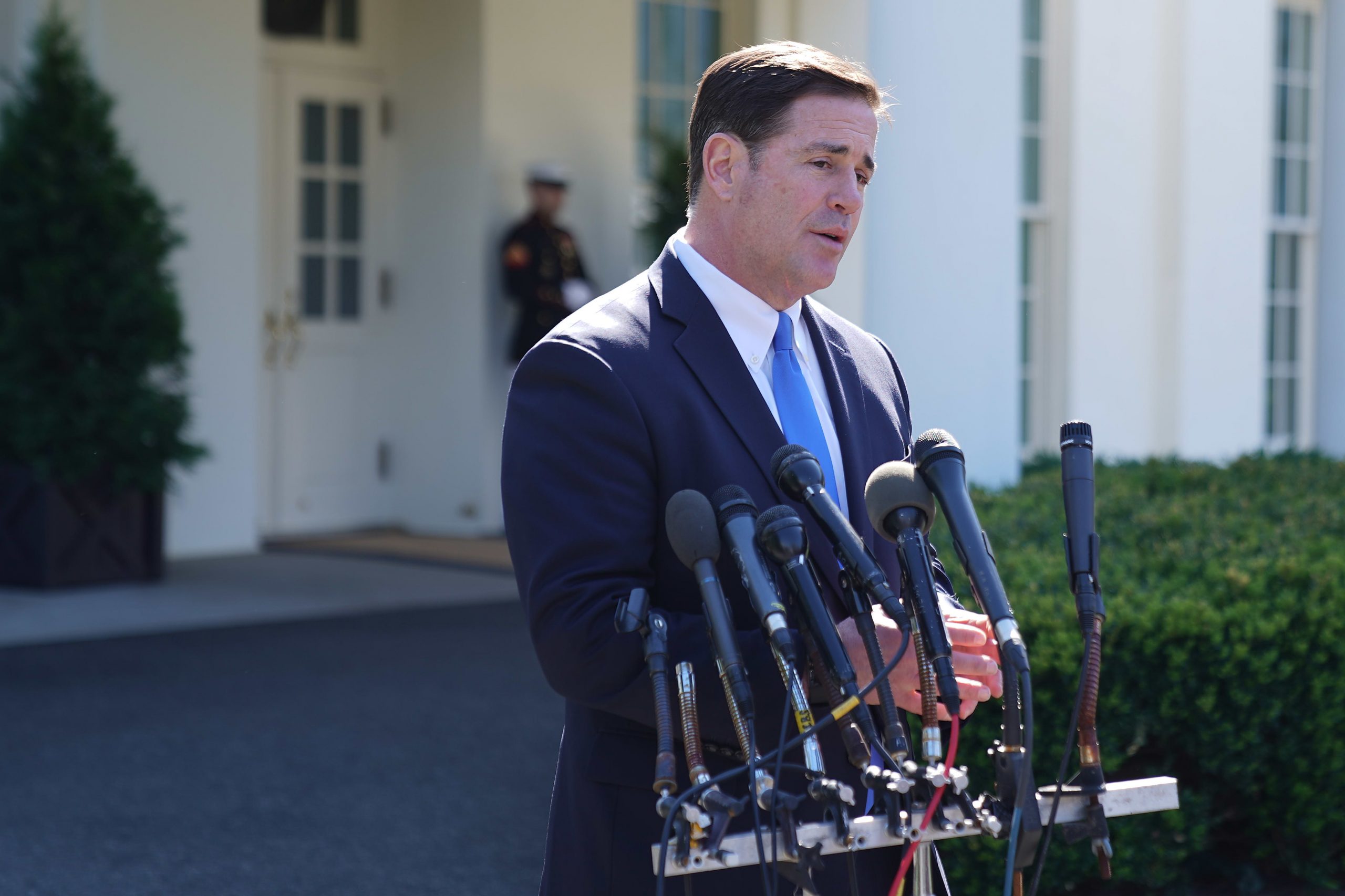 Arizona Gov. Doug Ducey talks to reporters after meeting with then-President Donald Trump at the White House on April 3, 2019.

The states are withdrawing two or more months before their scheduled end date on Sept. 6. Officials claim the extra benefits are causing workers to stay on the sidelines, making it harder for businesses to hire.

Four of the states — Arizona, Montana, New Hampshire and Oklahoma — are paying return-to-work bonuses in lieu of the enhanced unemployment benefits to encourage residents to accept jobs.

“In Arizona, we’re going to use federal money to encourage people to work instead of paying people not to work,” Gov. Doug Ducey said last week.

The state’s Back to Work program offers one-time $1,000 payments to unemployment recipients who accept a part-time job and $2,000 to full-timers.

New Hampshire, via its Summer Stipend Program, is paying $500 and $1,000 bonuses for part- and full-time positions, respectively. Montana and Oklahoma are paying $1,200 to those who accept full-time work.

However, some economists don’t think unemployment benefits are playing a big role in hiring challenges.

“I think it’s a gamble for states to assume expanded unemployment insurance is the sole reason why they’re having trouble hiring,” said AnnElizabeth Konkel, an economist at job site Indeed.

“I think it factors in some way, but it’s impossible to quantify how much and I don’t think it’s the sole reason,” she added.

Instead, many economists believe the ongoing pandemic is likely the driving force.

Covid is what started this entire mess, so you can’t discount it until we get 100% back to normal.

Covid infections are falling but remain elevated. The seven-day average of new infections was about 29,100 as of Thursday, according to data compiled by Johns Hopkins University.

Just 48% of adults are fully vaccinated, according to the Centers for Disease Control and Prevention. Those who haven’t completed the full vaccine regimen may be hesitant to return to work given the continued health risk.

“Covid is what started this entire mess, so you can’t discount it until we get 100% back to normal,” Konkel said.

And there are other pandemic-related factors, like child care if schools aren’t fully reopened or daycare centers remain closed. There’s also generally a lag between labor demand (job openings) and supply (available workers).

A single mother with child-care challenges or someone afraid or at risk of the coronavirus may be hesitant to return to work, even with a bonus available, Konkel said. But such a bonus may be impactful for the unemployed if money is a primary motivator, she added.

There are also caveats associated with the return-to-work bonuses that limit their availability.

For example, workers in New Hampshire and Arizona are only eligible if their new jobs pays less than $25 per hour (equivalent to a $52,000 annual salary). Workers must complete four to 10 consecutive weeks of work to qualify, depending on the state. Those in Montana and Oklahoma also may only be able to find part- instead of full-time jobs, which would likely disqualify them from a bonus.