U.S. – Supply Constraints An Issue in Housing Too

Global equity markets gained ground at week’s end as the latest purchasing manager indices showed improved optimism for both services and manufacturing. Markets had sold off earlier in the week over concerns that faster inflation would lead to sooner-than-expected rate hikes than previously anticipated. A number of Fed speakers through the week re-iterated that the U.S. economy is a long way from recovery.

The FOMC minutes were a bit stale this week, as they reflected discussions prior to the recent inflation data. They suggested the Fed is not ready to adjust its pace of asset purchases. However, we expect enough progress in the economy by the end of this year for the Fed to start tapering purchases. Atlanta Fed President Bostic emphasized that the Fed is “going to have to be nimble” in terms its policy responses. This suggests there may not be a lot of warning before Fed policy shifts.

Housing has been a bright light in the recovery. Low mortgage rates and the race for space helped the sector shake off the early shutdowns, allowing it to rebound to new heights. Both housing starts and sales took a breather in April, after earlier brisk activity. Housing starts retreated 9.5% but remained at a healthy 1.57 million units (SAAR). That is on par with the pre-pandemic pace of construction. Building permits also held at a fairly high level, pointing to continued momentum in the sector (Chart 1). 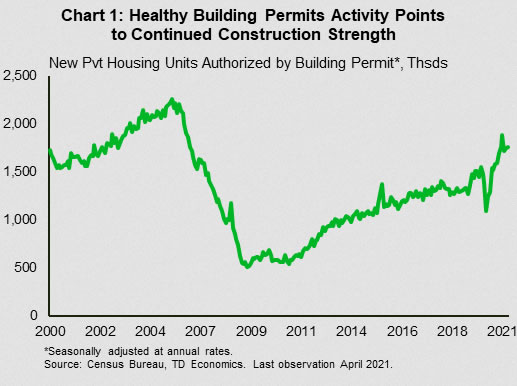 The bigger challenge facing housing is on the supply side, not demand. Lumber prices have skyrocketed since the pandemic. The benchmark lumber price has trebled since the pandemic’s onset. The NAHB estimates that this is adding $36k to the cost of a new single-family home. Construction costs overall are 7% higher year-on-year, up from a 3% pace pre-pandemic. Overall labor shortages should be less of an issue, with the unemployment rate in construction up notably from its pre-pandemic level.

Supply is also an issue in the resale market. Existing home sales fell 2.7% in April, as sales activity continues to normalize from the breakneck pace through the winter. Even with the decline in sales, inventory levels remain tight. Properties sold in 17 days on average, a record low. As a result of tight market conditions, prices continue to rise at a healthy clip. As seen in Chart 2, prices have moved well ahead of pre-pandemic trends. Like many other areas of the economy, the supply of listings is likely being held back, at least in part, by the pandemic. We expect that price pressures will ease as the pandemic subsides, more listings come to market and mortgage rates head higher. 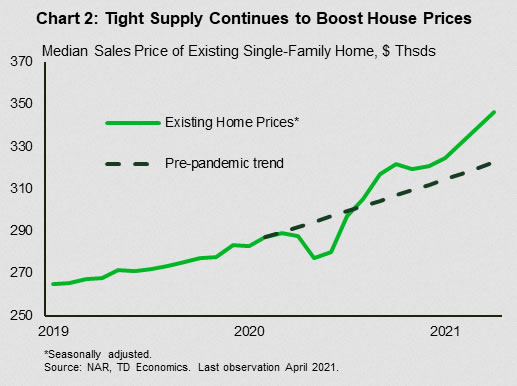 Supply constraints continue to be the hot topic across many sectors of the economy. Supply is struggling to keep up with the surging demand, leading to price pressures. This underscores how the most important economic policy right now is control of the pandemic. Until that occurs, these mismatches are likely to continue to pose challenges.

Canada – The Same, But Different

Last week’s significant upside surprise in April U.S. consumer price index (CPI) inflation certainly grabbed the attention of markets and policymakers, so much so that the Federal Reserve’s Vice Chair Clarida felt the need to comment on the individual data point. This week, Canada was home to its own upside inflation surprise in April, the details of which are worth unpacking. 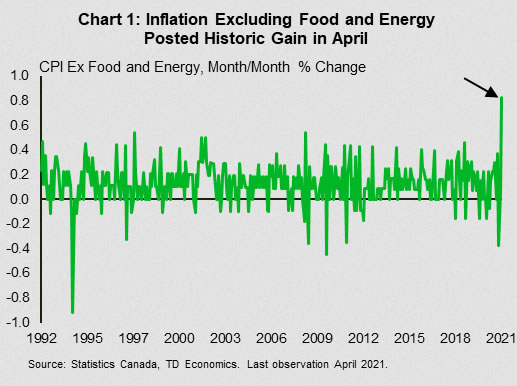 Before we take a deeper dive into the data, it’s important to note that the scale of the surprise north of the border was nowhere near that of the U.S. Indeed, year-on-year inflation came in 0.6 ppts higher than what consensus had anticipated stateside (at 4.2%), versus a +0.2 ppt surprise in Canada (at 3.4%). Still, Canadian CPI excluding food and energy (which is the core inflation measure used in the U.S.), was up 0.8% m/m, nearly matching the U.S. gain and marking the fastest increase since at least 1992. In addition, the average of the Bank of Canada’s preferred inflation measures clocked in at 2.1% – the highest since 2012. Adding a jarring element to the Canadian increase was the fact that it happened while pandemic restrictions were being tightened across much of the country, while the U.S. data reflected re-openings. Meanwhile, both data points reflected input shortages caused by the pandemic.

The U.S. upside surprise was driven by a few categories (i.e. used vehicle prices) that experienced improbable price movements, lending credence to the view the inflation pressures would be “transitory”. When we looked through the several hundred categories comprising Canadian CPI (and applying seasonal adjustments when applicable), the contribution to overall inflation was more spread out across the numerous groupings. However, like the U.S., these price pressures appear transitory. For instance, telephone service prices increased significantly month-on-month, although this followed two straight monthly declines and the index has been trending downwards since the second half of 2017. Also, the price of travel tours experienced a robust monthly increase. These prices reflect holiday packages booked a few months in advance and could therefore be capturing re-opening optimism (another temporary boost). However, this series has behaved strangely during the COVID-19 outbreak (i.e. a 31% year-on-year gain in January during the height of the second wave), thus distorting the clarity of its signal. Homeowners’ replacement costs also added an outsized amount to the inflation rate, reflecting the sharp upward rise in new home prices. Here, there may be some near-term persistence, although an expected cooling in commodity and housing prices in coming quarters may sap some steam from this source.

There are also other good reasons to take the CPI data in stride. For one, price levels remain low relative to where they would have been in the absence of the pandemic (Chart 2). For two, Canadian inflation risks are likely lower than they are in the U.S. The strong Canadian dollar should keep some price pressures at bay by mitigating the import price pass-through. Also, and perhaps most importantly, the more hawkish stance taken by the Bank of Canada relative to its U.S. counterpart should help keep inflation expectations anchored. 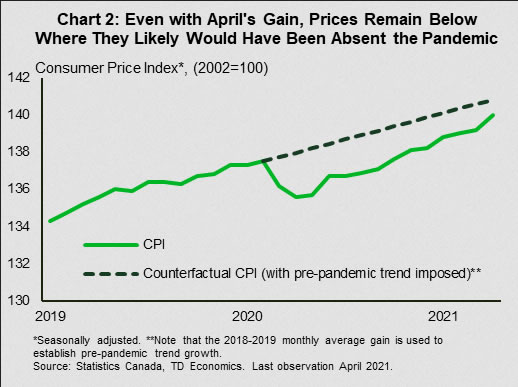 Who knew just over a year ago that passports would be a ‘thing’. Well, they are. And will soon become – at the risk of sounding trite – the ‘new normal’. The pandemic has devastated the travel and tourism sector. And a vaccine passport might be the sector’s ticket to revival. Vaccine passports will particularly help countries who are reliant on tourism (for example, the EU), as it would allow them to welcome domestic and foreign tourists.

Countries can use vaccine passports domestically, internationally or both. Let’s take the example of the EU and Israel, two locations that have made significant progress on this front. The EU says the passport (dubbed as a “Digital Green Certificate”) will only be used at EU borders and not for attending sporting events, theatres etc. But countries may implement their own digital passes for people wanting to attend public events. Meanwhile, Israel’s “green pass” is valid for cross-border travel of Israeli citizens. The pass is also compulsory for visits to restaurants and stadiums etc. Israel has also introduced a ‘purple badge’ for unvaccinated individuals who want to go to gyms and swimming pools. Those with a purple badge have to wear masks and do social distancing. The purple badge isn’t accepted at all venues, for example stadiums.

Europe’s proposed vaccine passport covers anyone who is either vaccinated, has a negative test or has recently recovered. Anyone who has received their final dose of an EU-approved vaccine at least two weeks beforehand can travel to the EU, no matter their country of origin. A list of ‘low-risk’ countries will also be expanded, allowing travel even without a vaccine. A low-risk country is currently defined as one with an infection rate of less than 75 cases per 100k population. But travelers from such countries would still have to show a negative test or show proof of having recovered from the virus.

Still, it is important to remember that the EU proposal is non-binding. This would allow EU states to set their own rules. Any EU member can unilaterally decide which non-EU country they ban travel from (with or without vaccines). For example, if a Canadian tourist lands in Spain, there is no guarantee they can travel to Portugal, if Portugal bans entry of Canadian travelers. The EU is giving a lot of leeway to member states on how they want to regulate access to domestic activities (restaurants, stadiums etc). Each member state could have its own rules for access to domestic activities. This will make things messy, complicated and uncertain.

Meanwhile, Israel’s green pass is available for vaccinated individuals and recovered patients. But unlike the EU, adults with a negative coronavirus test are not eligible for the green pass. 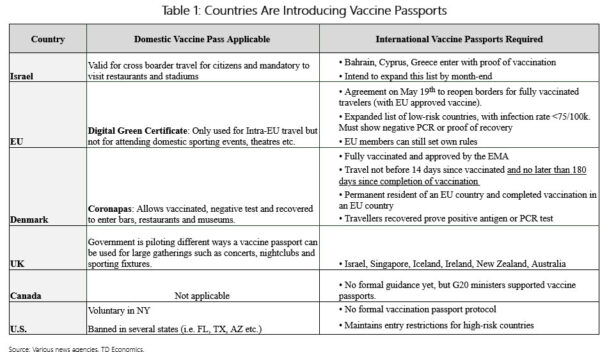 Stateside, there is no unified strategy regarding vaccine passports. The federal government has said it will not seek a universal vaccine passport, leaving states moving ahead with their own plans. Some states strongly oppose the idea of vaccine passports, while others are in favor, which is leading to patchwork policymaking throughout the country. However, some large businesses, such as sports and concert venues are requiring proof of vaccination.

Emerging markets (EMs) are a different story altogether. Developments related to vaccine passports mean that international tourism, especially from EMs, will remain structurally weak. This is for several reasons: (1) Europe isn’t yet accepting Chinese and Russian vaccines which most EMs are getting (2) EM vaccination rates are well behind advanced economies (AEs) (3) Unlike AEs, many EMs do not have the capacity to put resources towards developing vaccine passports.