OPEC Meeting Unlikely to Roil Markets, But Iran Might

It’s a crucial week for the oil market, with an OPEC+ meeting on Tuesday that will likely see the cartel and its allies increase their production gradually, capitalizing on the improvement in demand. This has already been decided, so the market reaction this time will depend on the signals they send about any future moves. As for oil prices, the main downside risk is a flood of Iranian supply returning to the market later this year.

Sticking to the plan

After making deep production cuts last year to stabilize a market in free-fall, the world’s most powerful oil cartel and its allies are now moving in the opposite direction. The outlook for demand has improved dramatically thanks to widespread vaccinations and tremendous spending by governments, enabling OPEC to bring back some lost supply.

The producers agreed back in April to add around 2 million barrels per day until July, a commitment they are expected to stick to this week. Oil prices remain elevated and the economic outlook is much brighter, so it makes sense for the pandemic-era emergency cuts to be scaled back. 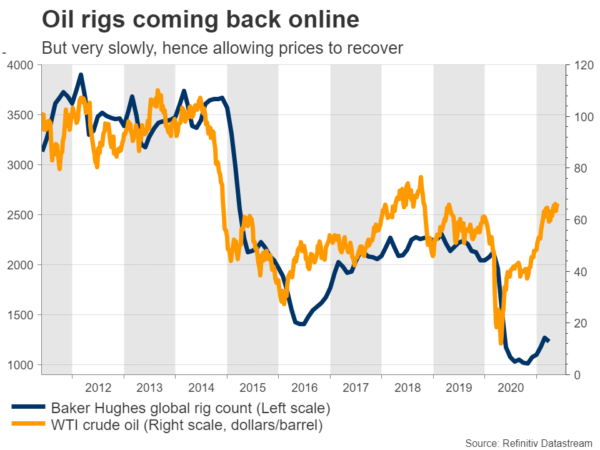 What is less clear is whether OPEC+ will also signal that more production increases are on the horizon, beyond what has already been agreed. Some members will surely be eager to pump more barrels and collect more revenue, helping to repair the damage the pandemic inflicted on their budgets. Some others – like Saudi Arabia – could take a more conservative approach.

The market reaction will likely depend on how these talks play out. The more prudent approach would be to wait and not signal anything further at this stage, but then again, convincing every producer to agree to that will be difficult.

Elephant in the room

Complicating matters further is Iran, which is in the middle of negotiations with America about reviving the famous nuclear deal. In exchange, Washington would relax its economic sanctions that have crippled Tehran’s oil industry. Diplomats suggest that significant progress has been made, but important issues still need to be resolved. 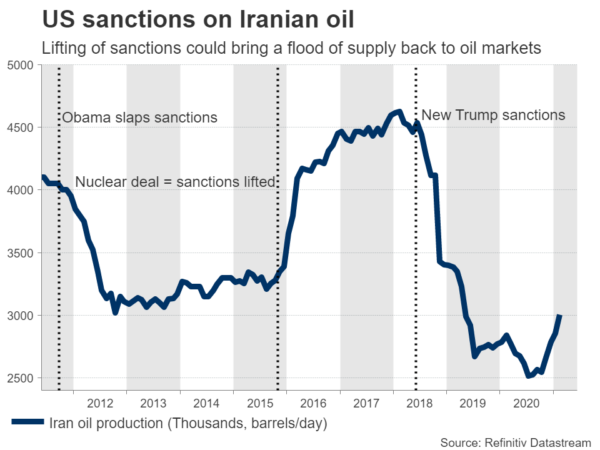 This ultimately implies that an overflow of Iranian supply could return to the market, perhaps later this year. If there is an agreement, the mere signal would probably be enough to push oil prices lower as traders take profits on ‘black gold’. This is a longer-term story, but it’s probably the main downside risk facing oil prices at this stage.

But perhaps not enough to derail the uptrend

In the bigger picture, even if the signal that Iranian supply is coming back sinks prices, it might not lead to an outright trend reversal – just a deep correction. The supply-demand equation has improved lately and OPEC might help balance things out if there is a nuclear deal, by slowing down its own production increases.

Hence, in an environment where demand is recovering quickly, the market may be able to absorb some targeted production increases. Any sell-off from an Iranian deal may be sharp, but perhaps not a complete game-changer.

The real wildcard is North American production. The longer prices remain elevated, the higher the risk that many private producers who were forced to slash their production in the middle of the crisis start bringing their own oil rigs back online. The market may be able to handle Iran and OPEC+, but probably not the Americans too.

Taking a technical look at WTI prices, the market has been stuck in a wide sideways range between $57.30 and $68.00 for months now. If the bulls stay in control and manage to pierce above the ceiling of that range, their next target could be the $70.50 zone, taken from the inside swings high of mid-2018.

On the downside, the first area to halt the bears may be around $63.70, a violation of which would turn the focus towards the recent lows of $61.55.

Finally, note that beyond oil prices, the outcome of the OPEC meeting and the Iran saga could also impact the currencies of oil-producing nations. The prime candidates are the Canadian dollar, the Russian ruble, and the Norwegian krone.