EURJPY seems to be lacking immediate positive drive to surpass the 134.00 hurdle despite multiple bounces off the 133.61 barrier. Although the pair’s broader uptrend is firm, something also being displayed in the climbing simple moving averages (SMAs), the static Ichimoku lines are reflecting a muted market mood after the propulsion on May 27, off the Ichimoku cloud’s upper surface.

The short-term oscillators are suggesting bullish sentiment is currently dwindling. The MACD, in the positive region, is gliding beneath its red trigger line towards the zero mark, while the RSI is flirting with the 50 level. The negatively charged stochastic oscillator is endorsing the current subdued and ranging demeanour in the pair.

If the price oversteps the Ichimoku lines at 133.87, early resistance could develop around the 134.00 mark and specifically from the near 40-month high of 134.12. Should the pair start to drift north of this limiting neighbourhood, the price may then aim for the 134.64 and 135.06 barriers, identified around early February 2018. Additional gains from here could then extend the uptrend in the pair to challenge the 135.83 high.

In the negative scenario, sellers could face immediate friction from the 133.40-133.61 section, which also encapsulates the 50-period SMA. However, diving below this and the cloud, a deeper price pullback could encounter a zone of support between the 100-period SMA at 133.13 and the 132.92 low. If sellers manage to tilt the scale increasingly negative, the price may then slip towards the 132.50 trough.

Summarizing, EURJPY is sustaining a neutral-to-bullish demeanour above the SMAs and the 133.00 border despite its recently muted price action. 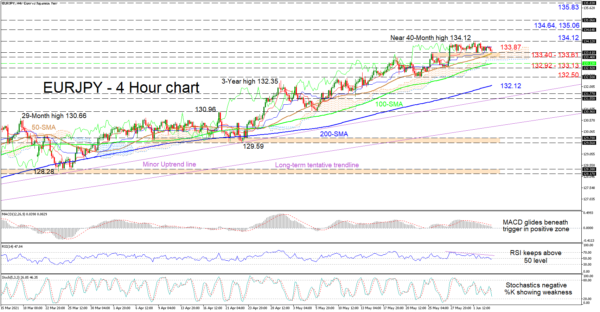