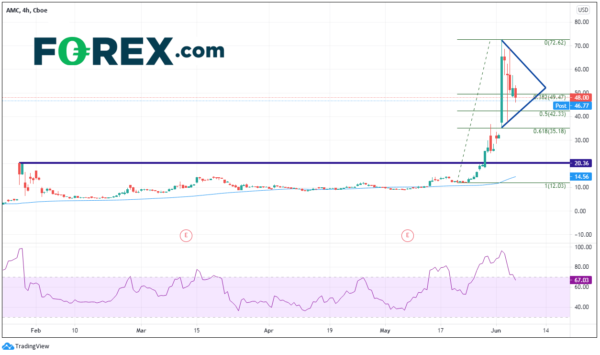 Last week, US Non-Farm Payroll data was weaker than expected at +559,000 vs an expectation of +650,000.  Those looking for help in determining the US Fed’s next move were probably disappointed.  Canada also released payroll data.  Economists were forecasting -20,000 jobs for the month of May.  The actual result was a decrease of 68,000 jobs.  The Bank of Canada meets this week.  Will the central bank continue its tapering path?  The European Central Bank also meets this week.  The big question for ECB board members will be whether they should cut back on the increased bond purchases they began in March.  In addition, with increased inflation on the top of trader’s minds lately, we’ll get China CPI and PPI, as well as CPI from the US.  Would higher inflation signal a potential tapering for the Fed?

At its last meeting on April 21st, the Bank of Canada cut bond purchases from C$4 billion per week to C$3 billion per week.  However, as with the US, Canada has had 2 consecutive months of weaker than expected payroll data.  In addition, most of the country is emerging from lockdowns and restrictions as vaccinations pick up.  Inflation has been elevated. Retail sales was better than expected, however the latest release was for March.  The Markit Manufacturing PMI and the Ivey PMI (both for May) were strong.  But the Canadian Dollar is strong as well, as Crude Oil approaches $70. (The Canadian Dollar and Crude oil are positively correlated).  Will stronger manufacturing and elevated inflation outweigh weaker employment data?  If so, the BOC will continue tapering.  However, if weaker employment is too much now for the BOC, they may pause their tapering.  Note, however, that BOC Governor Macklem said recently that tapering was the right move for the economy.  Watch for profit taking by USD/CAD shorts ahead of the BOC announcement on Wednesday.

The ECB also meets this week at their June interest rate decision meeting.  However, expectations are quite different from those of the BOC. Europe is also reopening from lockdowns and restrictions, however there is still concern about variants and therefore, the reopenings are happening at a slower pace. European manufacturing and services data were strong in May, while inflation has been moderate.  The ECB has no intention of tapering, however they may be looking to bring purchase amounts back down to pre-March levels (ok..that’s less bond buying, but I wouldn’t consider it tapering since they can buy as much or as little as they want, whenever they want, under PEPP). Most ECB members have been pounding the pavement with a single message:  the ECB won’t taper anytime soon.  But, as mentioned, will it be time to lower the amount back to pre-March levels?

Inflation data from China and the US will be highlights for this week.  China’s CPI and PPI will be noted but will be a sideshow to the US CPI.  All inflation data releases and inflation components were stronger than expected for April, including the Fed’s favorite inflation metric, Core PCE.  Some Fed officials have expressed that it may be time to begin “talking about talking about tapering”.  Expectations are for the headline YoY print to be 4.7% vs 4.2% in April.  In addition, the Core inflation rate is expected to be 3.2% vs 3.0% in April.  These are both higher than the Fed would like, but they have said they ware willing to let inflation run hot, while the labor market improves.  The NFP print may be exactly what they needed to allow them to hold off on tapering comments at the June meeting.

There is very little in terms of earnings due out next week.  However, there are a few that may be of interest, especially some recent IPO companies.  The most notable earnings releases for this week are as follows: SFIX, RWS, CARD, HLMA, AUTO, TED, CHWY, GME, WINE

The second week of the month is usually slow in terms of economic data.  However, there are the previously mentioned central bank meetings, as well as the CPI data. The more notable data releases this week are as follows: Remember back in late January when the original meme stock, GME, was bursting higher as reddit users tried to carry out hedge funds investors?  At the time, AMC had a bit of a run up, but nothing like that one it had this week! Ahead of the Memorial Day Weekend in the US last week, AMC pushed through its January highs of 20.36 and began moving aggressively higher.  On Wednesday last week, the meme stock gapped higher on the open from 31.99 to 37.62 and traded as high as 72.62 ON 1 DAY! On Thursday, price pulled back to as low as 37.66 before closing Friday near 47.91.  Obviously, the vicious volatility caused the RSI to move higher, near 95.00 on Wednesday, but one can never trust an oscillator in erratic markets. As with the ETH chart we looked at a few week ago, it’s tough to find support and resistance with such little data. It looks as if there may be some trendline resistance near 65.00, just ahead of June 3rd’s highs at 68.71.  The June 2nd high resistance crosses at 72.62.  Support is a bit easier, with the 50% retracement level from the May 20th lows to the June 2nd highs conferencing with an upward sloping trendline near 42.33.  Below there is the 61.8% Fibonacci retracement level from the same timeframe at 35.18, then the gap fill down to 31.99.  The RSI has pulled back, barely into neutral territory.  However, don’t be surprised if it tries to test the bottom end of the neutral zone!

Barring any surprise news this weekend, markets will be preparing for inflation data, as well as, the BOC and ECB meeting this week.  Watch for profit taking ahead of the BOC meeting on Wednesday as short positions look to lock in gains.   And if US inflation data is stronger than expected, traders will continue to discuss the Feds “taper/no taper” decision at the upcoming June 16th meeting!