Pound Under Pressure, Falls Below 1.39

The British pound has reversed directions on Tuesday. In the North American session, GBP/USD is trading at 1.3913, down 0.14% on the day. The pair touched a low of 1.3860 in the Asian session.

Last week’s FOMC meeting shook up the financial markets and sent the US dollar sharply higher. The Fed put the markets on notice that it expected two rate hikes in 2023, a sharply hawkish turn which caught the markets off guard. The British pound was hit hard, falling 2.14% last week and touching a two-month low.

The pound’s sharp descent put the currency in oversold territory, and this led to an impressive rebound on Monday, with gains of 0.93%. However, this upswing has fizzled out, ahead of Fed Chair Powell testifying before a congressional committee later in the day.

In prepared remarks which Powell will were released ahead of the hearing, the Fed Chair has reiterated that inflation is transitory. US inflation has hit a 13-year high, but the markets seem to have fallen into line behind the Fed, even though the markets were in a panic after the FOMC shocker. With a lack of tier-1 data this week, investors will have plenty of time to focus on Powell’s testimony, which could cause some dollar volatility later in the day.

In the UK, a positive release on government borrowing wasn’t enough to prevent the pound from losing ground. Public sector net borrowing came in at GBP23.1 billion in May, down from GBP30.1 billion in April and also below the estimate of GBP26.1 billion. As Covid restrictions were eased, the economy has reopened and UK public finances were better than expected. 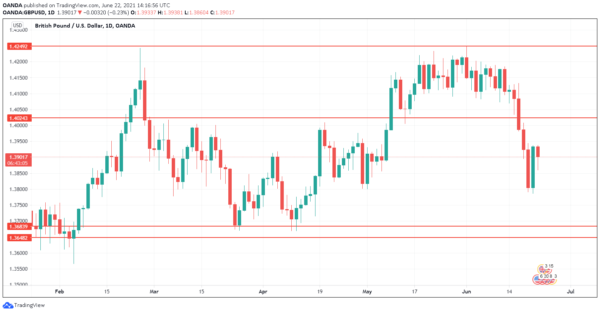