The Canadian dollar is in positive territory for a third straight day. In Wednesday’s North American session, USD/CAD is trading at 1.2262, down 0.35% on the day.

In Canada, the only events on the calendar this week were Retail Sales reports for April, which were released earlier today. Analysts had expected a rough ride, but the readings were worse than expected. Headline Retail Sales fell 5.7% (est. -5.0%). The sharp loss came during the third wave of Covid and was the largest decline since April 2020. Core Retail Sales looked even worse, plunging by 7.6% (est. -5.0%).

The Canadian dollar has extended its rally on Wednesday, as the upswing continued despite the disappointing Retail Sales data. Investors were more focussed on Fed Chair Powell, whose dovish remarks to a congressional committee are weighing on the US dollar.

Fed Chair Jerome Powell played a melody that the markets have heard many times before, saying that inflation remained transitory. Still, some lawmakers were skeptical, given that headline inflation rose 5% y/y in May, the highest in some 13 years. Powell was pressed as to whether the economy was headed to the hyperinflation of the 1970s, when inflation climbed above 10%. Powell acknowledged that inflationary pressures have been stronger than the Fed anticipated, but declared that hyperinflation was “very, very unlikely”.

Powell attributed most of the recent jump in inflation to the economic reopening and said he expected inflation to wane over time. Investors will be keeping a close eye on the Core PCE Price Index, the Fed’s preferred inflation indicator, which will be released on Friday. The index is expected to rise to 3.4% in May, up from 3.1% beforehand. 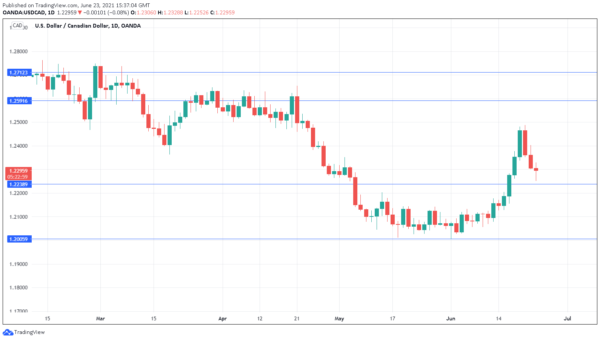