GBPJPY’s latest rally off the 100-day simple moving average (SMA) has failed to decisively close above the 155.00 handle, an area where the recent bearish price correction was previously initiated. This fresh price bounce at 151.30 is validating that the SMAs are shielding the positive structure.

The Ichimoku lines are indicating subdued positive momentum, which has yet to gain a clear lead, while the short-term oscillators are suggesting that bullish impetus is struggling. Barely above zero are the MACD and the red trigger lines, which are converging, while the RSI is flirting with the 50 threshold. The positive charge of the stochastic oscillator appears to be under pressure close to overbought territories.

If sellers maintain control, an initial tough support zone could develop from the blue Kijun-sen line at 153.68 until the cloud’s upper surface at 153.00. Subsequently, an area from the cloud’s lower surface at 152.26 until the 151.22 trough could provide additional downside limitations, to try and impede a deeper retracement from unfolding. However, should the price sink past the 100-day SMA’s vicinity, the decline could encounter the base of 148.51-149.41 before challenging the border of 147.39-148.10 just below.

If buyers resurface, the first upside obstacle is the 155.14 nearby high followed by the resistance belt of 156.00-156.60, moulded from two rally peaks, that being the near 40-month high and the February 2018 peak. Successfully resuming the broader uptrend, the pair may then challenge the 157.89 barrier, which happens to be the 161.8% Fibonacci extension of the down leg from 144.94 until 124.00 before targeting the 160.09 boundary, where the price collapsed aggressively back in June 2016.

Summarizing, GBPJPY is sustaining a bullish bearing above the SMAs and the 151.22 trough. Yet, a break below 148.51-149.41 could signal negative pressures are gaining the upper hand. 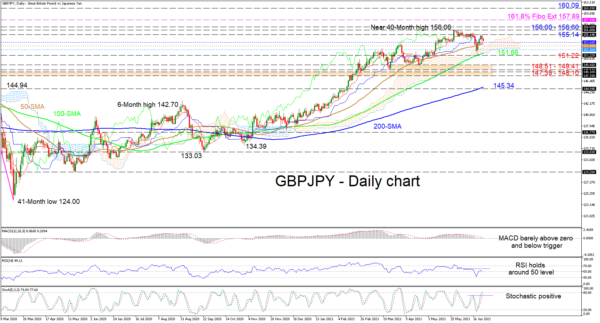