U.S. – Inflation Continues to Heat Up

The fourth week of June was action-packed. It included several first-tier data reports, plenty of ‘Fed speak’, where inflation remained front and center, and news that a bipartisan agreement had been reached on Biden’s infrastructure plan. Amidst the bustle, the stock market found better footing, with the S&P 500 up roughly 2.5% from last week’s close as at the time of writing.

The most-awaited economic report of the week was on personal income and spending. The report showed that income fell for the second month in a row in May (-2% month-on-month), once again reflecting a pullback in stimulus payments. This weighed on spending, which held flat in nominal terms and pulled back 0.4% in real terms. Still, the underlying picture is better than meets the eye. Real services spending continued to grow even as goods spending pulled back. Many states removed or significantly eased outstanding business restrictions in the May to June period, giving service-based establishments an opportunity to expand operations. With pandemic-related concerns abating, we expect services spending to continue carrying the torch in the months ahead as it makes up for ground lost during the pandemic.

Moving to inflation, the same report revealed that price growth heated up in May (Chart 1). Headline PCE inflation rose to 3.9% last month, while core PCE – the Fed’s preferred inflation gauge – rose to 3.4%. The latter is at its highest level since the early 1990s.

Concern over rising inflation and its implications for Fed policy led to a rise in financial volatility last week. Speeches from Fed officials this week were more mixed in their messaging on inflation. Fed Chair Jay Powell was sanguine on inflation risks and emphasized patience, saying “we will not raise interest rates pre-emptively because we fear the possible onset of inflation. We will wait for evidence of actual inflation or other imbalances.” Fed presidents were more hawkish, suggesting that upside economic surprises may warrant an earlier removal of stimulus. As long as the recovery continues, we remain of the view that the first rate hike is likely to come in the final quarter of 2022 (see Dollars and Sense).

Keeping with the theme of rising prices, home price growth had another banner month in May, with the median home price surging to nearly 24% year-over-year (Chart 2). Contributing to the gain is a low inventory backdrop. This same element, coupled with receding affordability, has weighed on the sales pace. Existing home sales pulled back for the fourth consecutive month in May, while new single-family home sales have followed a similar trajectory. Looking ahead, rising interest rates and the re-emerging popularity of denser rental living, are headwinds to homebuying. Even so, housing demand is likely to remain well-supported this year thanks to an improving labor market.

On that front, next week’s payrolls report will shed light on the progress of the labor market recovery as the second quarter drew to a close in June.

The U.S. is a few months ahead of Canada on its reopening path, relaxing restrictions through March even as they tightened here. As such, developments there can offer a blueprint on what to expect in Canada through the early stages of its own re-opening.

For instance, real retail sales (subtracting inflation) are up about 40% (annualized) through May compared to February in the U.S. This should offer some comfort for retailers in Canada after this week’s retail trade report showed that inflation-adjusted sales tumbled 5.6% m/m in April, with early estimates showing another decline in May (Chart 1). 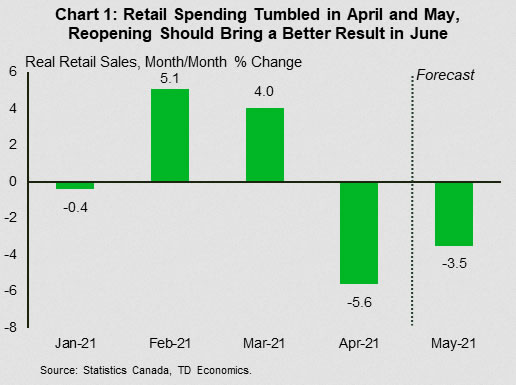 In the labour market, the pace of U.S. job gains has disappointed expectations since April. The narrative behind this underperformance is that labour supply is being held back (perhaps even moreso in some lower-wage, high-touch industries) by virus fears and generous government benefits. A lack of childcare options, retirements and the “normal” time associated with a job search could also be factors restraining labour supply.

In Canada, we expect near-term hiring to be held back by many of these same factors as provinces re-open, although to a lesser degree. For one, vaccine take-up has been stronger here, which should lessen virus fears. In addition, the CRB benefit will be cut back significantly starting in July, while in the U.S., federal government support is staying at its current level through September (though several states are opting out). Canadians have also been more actively engaged in the labour market, evidenced by a participation rate that has been consistently above that in the U.S.

Nonetheless, Canada is not at herd-immunity and the federal government continues to pay out benefits to workers impacted by the pandemic. These factors could yet slow the pace of recovery in Canada’s high-touch industries.

It may not just be high-touch industries that find it challenging to staff positions. Data released this week showed job vacancies in the construction sector rising to the highest level on record in the first quarter, vastly outstripping the gain in employment for the second straight quarter and suggesting that the market is extremely tight (Chart 2). The nation’s heated housing market is behind this outcome. Statistics Canada’s second quarter Survey of Business Conditions found that 35% of firms in the construction industry expect labour shortages to be an obstacle – the second highest reading among industries, behind accommodation and food services. Homebuilding is likely to remain strong through 2021, offering continued support to labour demand. 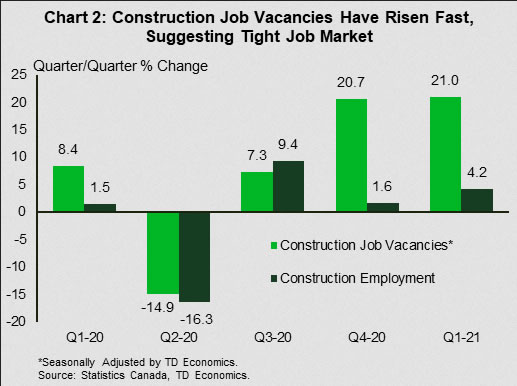 Beyond the near-term, the pandemic may have fundamentally changed some sectors (see next section). For instance, some jobs in industries heavily impacted by the pandemic may never come back, having being transformed by digitalization and automation. Of course, as some jobs disappear others will take their place. However, it could take some time for workers displaced by COVID to find their footing in an economy that has increasingly embraced digitalization.

Elevated health concerns, social distancing protocols, and business and school closures have made for a difficult year for the Canadian economy. Despite these hurdles, the economy has been on a steady march towards recovery since initial lockdowns in the spring of 2020 (Chart 1). 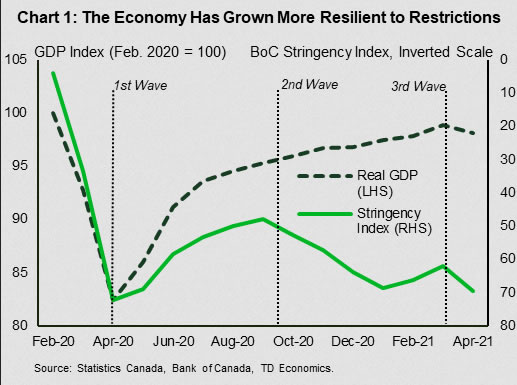 GDP may contract in April as a result of third-wave restrictions, but the setback is likely to be shortlived. The Canadian economy has grown more resilient to the impact of the pandemic over time. A crucial element to this story is the increasing use of technology by households and businesses.

Technology, whether in the form of automation or digitalization, jumped during the health crisis. The clearest example of this is online shopping. E-commerce sales have flourished during the pandemic, and now stand nearly 100% above where they were in February 2020 (Chart 2). Technology has also allowed businesses to maintain operations over the last year by allowing people to work from home. Some employers have even made the decision to move to a remote work set up permanently. These pandemic-induced changes represent structural shifts in the economy that will have important implications for the labour market recovery. 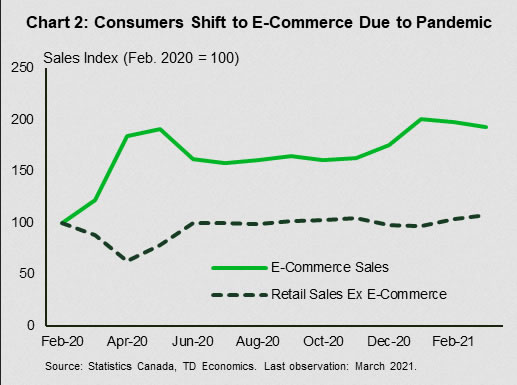 The increased use of digital technology will likely displace jobs, especially in areas that were hardest hit by the pandemic. The rise of e-commerce may mean less demand for salespersons. Similarly, the greater prevalence of work from home could weaken prospects for janitorial and building maintenance jobs.

While some jobs disappear, others will take their place. More online shopping will increase the demand for warehouse workers. Likewise, office building janitors may become housekeepers, as people spend more time working from home.

For some workers, the transition to a new job in the post-pandemic period will be relatively straight forward, for others it may be a lot more challenging. Individuals with skills in digital technology, for example, are likely to be in high demand, but those in more traditional roles may have to retrain. As a result, the labour market recovery could be bumpy as the economy reopens and, as we’ve seen in other countries further along the reopening path, we can expect reports of staffing shortages in the coming months.

The embrace of digital technology during the pandemic supported the Canadian economy through the depths of the health crisis. As we look ahead, however, it could weigh on the speed of the employment recovery. Impacted workers will need time to find new jobs and develop new skills. Fiscal and monetary policy will need to remain supportive in order to ease the transition and return the economy to its full potential.