GBPUSD is edging lower underneath its red Tenkan-sen line around 1.3895 after its latest bounce around the 1.3800 handle was curbed by the 100-day simple moving average (SMA) and the cloud’s lower surface. The SMAs are maintaining a bullish bearing, signalling that negative forces have yet to take full command.

That said, the Ichimoku lines are indicating that negative momentum is a slight step ahead, while the short-term oscillators are conveying a subtle tilt to the downside. The MACD, not that far below zero, is flattening towards its red trigger line, while the RSI is gliding lower in bearish territory. The negatively charged stochastic oscillator is promoting the recent loss of power in the pair.

Buyers have managed to remain largely absent after sellers redirected the price down, aiding even further their growing lead. Early support could emanate from the 1.3800 border and the 1.3785 adjoining low. Should a deeper retracement unfold, the lows of March 25 and April 12 at 1.3669 could provide a hardened floor to help the pair find its feet, especially as the 200-day SMA, currently at 1.3638, is approaching from beneath.

From a technical point, should GBPUSD steer below the 200-day SMA and the 1.3450-1.3564 support border subsequently collapse, this could spark worries of the negative bias becoming the frontrunner. Only a shift above the rally peaks of January and April 2018 of 1.4345 and 1.4376 respectively, could shift the bias back to decidedly bullish. 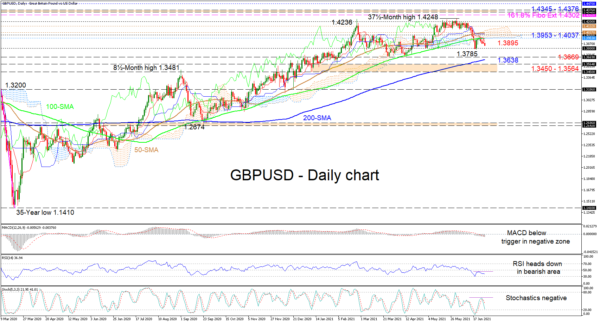