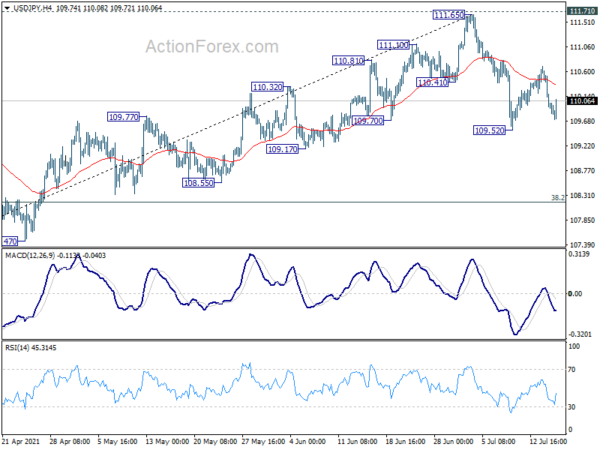 Dollar regained some ground in European session, as assisted by mild pull back in stocks. The greenbacks stay firmer into US session as jobless claims data showed continuing improvement. Sterling is also stronger today after BoE policymaker Michael Saunders’ hawkish comments. On the other hand, commodity currencies are trading lower, as led by pull back in New Zealand Dollar. But overall, most pairs are just range bound, while a firm direction is awaited.

BoE Saunders: Clear evidence that guidance conditions have been met

BoE MPC member Michael Saunders reiterated in a speech, “The Committee does not intend to tighten monetary policy at least until there is clear evidence that significant progress is being made in eliminating spare capacity and achieving the 2% inflation target sustainably.”

He added that these guidance conditions “have now been met”. There is “clear evidence” that GDP has “regained most of the lost ground in recent months”. Spare capacity in the labor market is “declining”. And the economy “continues to grow rapidly”. GDP is likely to regain pre-pandemic peak in the “next few months”.

Also, there is “clear evidence” that core inflation is “no longer below a target-consistent pace”, and it’s “likely to rise further in coming months”. This back drop meets the test of “significant progress in eliminating spare capacity and achieving the 2% inflation target sustainably.”

Even though the phrase “at least until” indicates these conditions are necessary but not sufficient for tightening. He said, “the guidance no longer rules out tightening.” Also, “the question of whether to curtail our current asset purchase program early will be under consideration at our forthcoming meetings”.

BoE Governor Andrew Bailey admitted in an interview that yesterday’s inflation numbers were “higher than we thought it would be”. But the central bank won’t be rushed in to raising interest rates.

“What we will have to do, again, is go through all the evidence and assess to what extent we think the sorts of things that underlie that are likely to be transitory,” he added. “And to what extent is it going to cause second round effects – so it starts to get embedded in expectations and it gets into wage negotiations and it’s difficult to get out (of an inflationary cycle).”

In reaction to people who said that BoE is being “casual” about the surge in inflation, he emphasized, “we’re not at all actually.” “The committee has been very clear – if we think the case is made, then of course, we will respond and use the policy tools. We must do that.”

UK employment back above pre-pandemic levels in some regions

ECB Visco: No tapering before the time comes

ECB Governing Council member Ignazio Visco told Bloomberg that, “we have to avoid tapering before the time comes that we’re really confident we’re back where we should.” He emphasized, “we really have to show to be determined”.

“Financial conditions are to remain favorable even if we have signs of some price increases that are above the target that the central banks have set,” he said.

“I don’t expect monetary policy to be tightened for a long period,” Visco added, as there is still “substantial slack” in the ec