The Fed will conclude its latest meeting at 18:00 GMT Wednesday. It will be a tricky one, as Chairman Powell will need to balance a strong US economy against fears of a sharp slowdown in emerging markets. As for the dollar, the big picture remains positive in an environment where America continues to out-recover other regions and the Fed ends asset purchases relatively soon.

Don’t expect much from the Fed this week. No policy changes are on the cards and there won’t be any updated economic forecasts either. This meeting will probably be used to buy time.

The US economy is booming. Inflation is running hot, consumption is strong, and the labor market is healing its wounds. Meanwhile, vaccination rates are high in most states and Congress is working on another massive round of infrastructure spending.

Normally, all this would argue for the Fed to start normalizing. But there are other elements to consider. Firstly, the Fed’s leadership believes this inflation episode will fade soon. Most of the overshoot in inflation comes down to the reopening of sectors like air travel and hotels, as well as supply chain disruptions in the car industry. 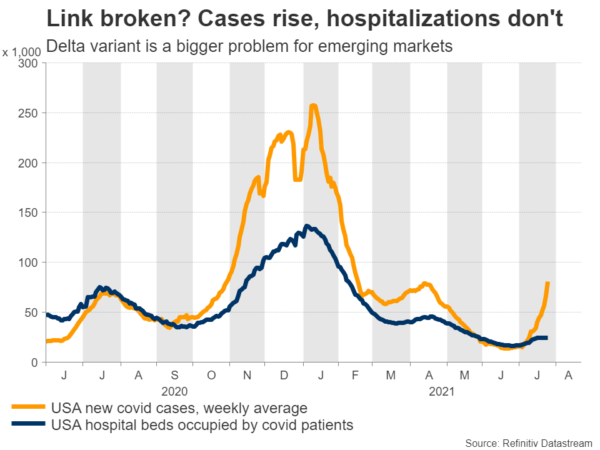 The other element that’s likely to keep the Fed cautious is the Delta variant that’s rampaging the world. This is admittedly a bigger problem for developing economies with low vaccination rates, but if those economies get hit hard enough, that could also hold back US growth.

The bottom line is that the Fed won’t commit to anything for now. Waiting until September to make the real decisions gives policymakers more time to assess how virus and inflation risks evolve, and allows them to examine more employment reports.

The market reaction this week will depend on the policy statement and Chairman Powell’s tone during the press conference. Specifically, will the Fed remove the word ‘substantial’ from its forward guidance that “substantial further progress” in the economy is needed before stimulus is dialed back?

If that word is removed, it would signal the Fed is moving closer to tapering its massive asset purchase program, setting the stage for an announcement in September. That would likely boost the dollar. 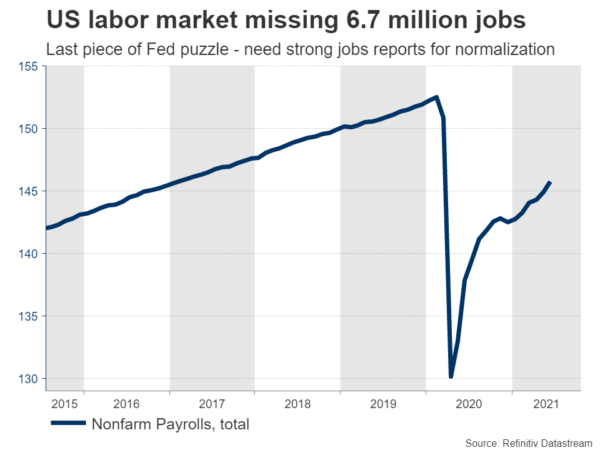 Otherwise, if that phrase is left intact, the dollar could take a minor hit as those looking for hawkish changes are left disappointed.

In the bigger picture, the outlook for the dollar seems promising. There is no question that the Fed will taper its asset purchases. The question is when. Ultimately, it doesn’t really matter whether it’s September or December.

What matters is that the Fed is years ahead of the European Central Bank and the Bank of Japan in the normalization game. Over time, this could allow real US yields to rise from depressed levels, making the dollar more attractive as interest rate differentials widen to its benefit.

And if the health situation in emerging economies deteriorates, that could also boost the dollar as investors look for defensive assets. It’s a win-win situation, with the greenback benefiting both from US economic outperformance and safe-haven flows.

The main risk around this view is the US labor market. Everyone expects the next few employment reports to be sizzling hot as the generous unemployment benefits expire and millions of workers return to the labor force. If that doesn’t happen, the Fed could slow down its normalization plans, hitting the dollar.

Taking a technical look at euro/dollar, initial support to declines could be found near the recent 1.1750 low, a break of which would turn the focus towards 1.1700.

On the upside, the 1.1880 zone would be the first test for buyers. If they pierce through, the next target would be around the 1.1980 region, which also encompasses the 50- and 200-day moving averages.

Beyond the Fed, there’s also the first reading of US GDP for the second quarter coming up on Friday to shake the dollar.