Dollar drops broadly overnight and stays weak, even though Fed acknowledged that progress has already been made in the economy. Uncertainty in the risk markets is keeping Aussie soft too. But Canadian Dollar is apparently rebounding with resilience in oil prices. Sterling is also strong with Swiss Franc while Euro under performs them. Focus will now turn to US GDP report.

Technically, GBP/USD’s break of 1.3908 resistance suggests completion of recent fall from 1.4248. USD/CHF’s break of 0.9116 also affirms that rebound from 0.8925 has completed at 0.9273 already. A major focus is now on the relatively weak Euro. Break of 1.1880 resistance in EUR/USD should also confirm short term bottoming at 1.1751. That would solidify the case of more Dollar selling for the near term at least.

Fed acknowledged that progress has been made

FOMC acknowledged in the statement that “the economy has made progress toward” the “maximum employment and price stability goals”. Chair Jerome Powell noted that Fed discussed the pace and composition of tapering but did not make any final decisions. Powell also noted that here is “little support” for tapering MBS purchases first, and that participants have mixed views on tapering MBS purchases faster. Next focus is the minutes which will be released in 3 weeks’ time.

In the mean time, Fed officials would likely share more of their view over tapering ahead. Key events leading to the September meeting are the July meeting minutes and Jackson Hole symposium in late August. We also expect more detailed information about tapering will be released in September, alongside updated economic projections and median dot plots. A formal tapering announcement will then be made in December.

Gold back about 1800, following Dollar selloff

Overall, we’d need to see Gold breaking 1916.30 resistance firmly, to give us more confidence that the corrective pattern from 2074.84 has completed. Otherwise, outlook will stay neutral for now. 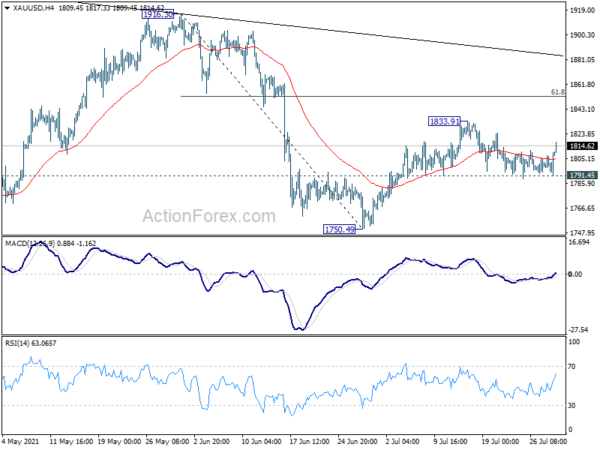 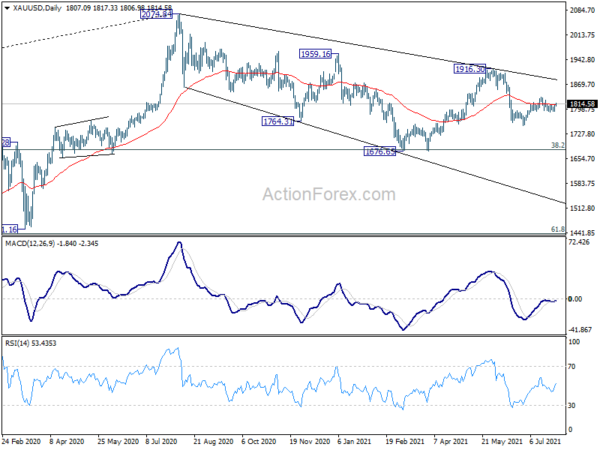 ANZ said, “the combination of clear upside for the activity and inflation starting point, but downside risks in the (quite possibly not far off) future, do, on the face of it, present a conundrum for the Reserve Bank… “If they raise rates now, the odds are indeed uncomfortably high that they’ll end up reversing course before long… Inflation pressures provide an excellent reason to raise interest rates now, despite downside risks… inaction comes with risks too. It’s time to start normalising monetary conditions, even if trouble might lie closer ahead than we hope.”

GBP/USD’s break of 1.3908 suggests that fall from 1.4248 has completed at 1.3570 already. Corrective pattern from 1.4240 might have finished too. Intraday bias is back on the upside for retesting 1.4248 high next. On the downside, below 1.3841 minor support will turn intraday bias neutral and bring retreat first, before staging another rally. 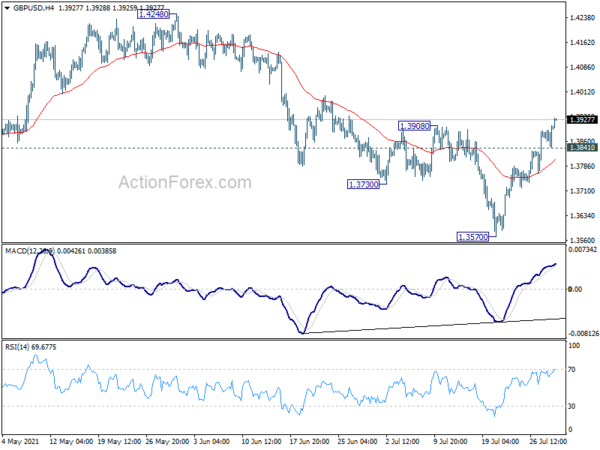 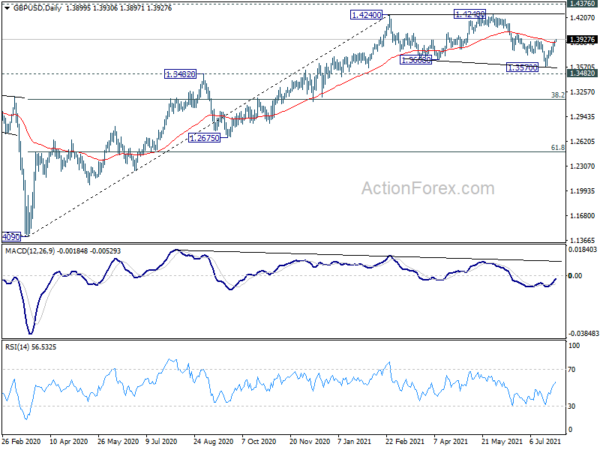