We expect the RBA to postpone the tapering policy announced last month. It will also downgrade GDP growth forecast for this year and revise the unemployment rate higher. All the above changes are driven by the unexpected lockdown in New South Wales, Australia’s largest state economy accounting for around a third of the nation’s economic output. 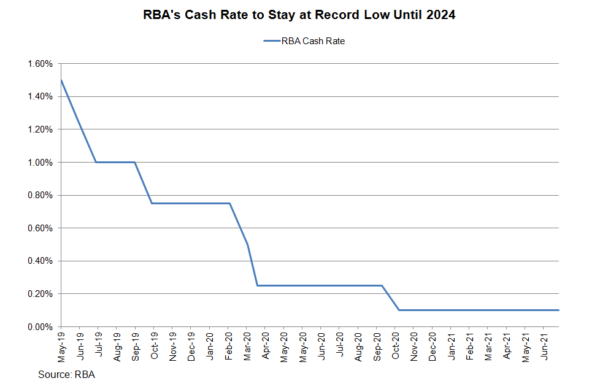 Recall that in July, the central bank announced to begin tapering its asset purchases in early September. The size of purchases would reduce to AUD 4B from AUD5B. The extended lockdown measures and the potential damage to the economy likely trigger a delay of the tapering. We expect policymakers to announce this week that the size of asset purchases will remain at AUD5B until at least the next review in November. Indeed, the central bank favors more flexibility. As noted in the minutes, “Given the high degree of uncertainty about the economic outlook members agreed that there should be flexibility to increase or reduce weekly bond purchases in the future, as warranted by the state of the economy at the time, rather than a commitment to a specific rate of purchases over an extended period”.

On the economic outlook, despite policymakers’ hopes to upgrade economic projections in August, the opposite will come true. The RBA currently forecast the economic to expand by +4.75% this year. We expect a sharp contraction to be projected for 3Q21 would trim the full year GDP growth. The unemployment rate estimate will also increase.

Nevertheless, just like what we experienced last year, a sharp economic contraction driven by the pandemic is usually followed by strong rebound, thanks to fiscal and monetary stimulus. Last week, the government announced additional financial supports for workers affected by the lockdown or public health order. COVID-19 Disaster Payments will increase to AUD750 and AUD450 a week, depending on hours of work lost, up AUD150 and AUD 75 respectively. The new arrangements would cost the federal government about AUD750M a week. Depending on the policy responses and the duration of the lockdown, we expect the damage to Australia’s economy would be temporary. The longer-term economic recovery stays intact.