BoE Meeting: Neutral, With a Touch of Optimism

The Bank of England will announce its policy decision at 11:00 GMT Thursday. This is one of the big meetings, with updated economic forecasts and a press conference. The UK economy is humming along nicely, but the Delta outbreak and the phasing out of government jobs programs could keep policymakers a little cautious for now. As for sterling, the big picture remains positive.

The Bank of England will be pleased with its progress when it meets this week, as the British economy has performed well lately. Unemployment has been better than expected, consumption is booming, and PMI business surveys suggest this strong spell of growth is likely to continue moving forward.

The only real worry is the Delta variant that is currently rampaging the nation. That said, with the UK enjoying one of the highest vaccination rates in the world and cases falling in recent days, this isn’t a huge problem either. It won’t lead to new lockdowns, so the economic impact will probably be mild. 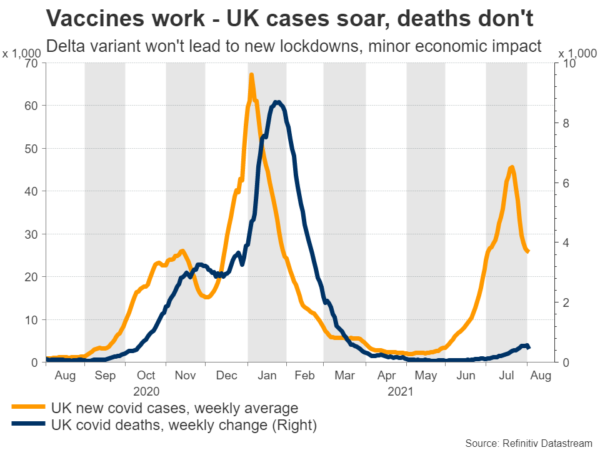 Indeed, things are going so well that a couple of BoE officials called for withdrawing some stimulus lately. Inflation is already running hot and they fear that unless the Bank takes its foot off the accelerator soon, this phenomenon could become more permanent. If people start to expect high inflation, they usually act on that expectation and it can become reality.

However, the rest of the Committee doesn’t share this view. Most members have been adamant that withdrawing stimulus too early would be an even bigger risk, as it could hurt the recovery. That’s especially true now that the government is also phasing out its job programs.

Neutral, with an optimistic flavor

Bearing everything in mind, it is probably too early for the Bank to take the next step in its normalization cycle. Things are moving in the right direction, but withdrawing stimulus right now is a little too aggressive from a risk-management perspective.

As such, the most likely conclusion is a 6-2 split vote, where most members favor keeping their asset purchase program intact but two members vote for an immediate end to quantitative easing. The dissenters will likely be Saunders and Ramsden. 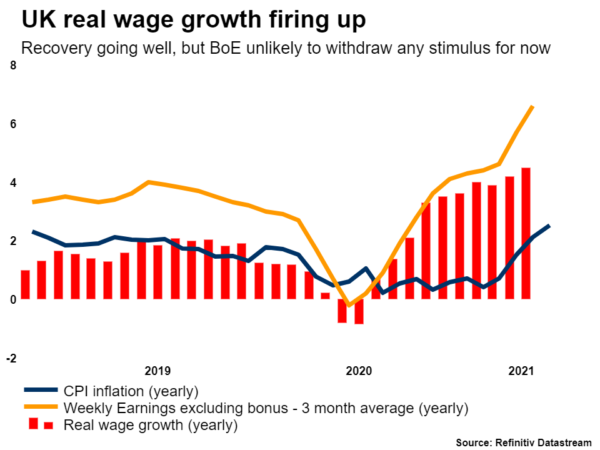 Coupled with some upgraded macroeconomic forecasts, that might be enough to lift the pound. When two members vote for an immediate withdrawal of stimulus, that shows which way the wind is blowing.

All told, the outlook for sterling remains favorable. The economy is strong, vaccination rates are high, and the Bank of England will most likely be one of the first central banks to raise interest rates this cycle. Markets are currently pricing in the first BoE rate increase for next summer.

That said, any future gains in the pound might be better reflected against the euro and the yen, not against the US dollar. The Fed will join the BoE in normalizing policy, whereas neither the ECB nor the BoJ will play that game anytime soon. This implies that we might be entering an environment where American and British yields move higher, but European and Japanese ones don’t.

Taking a technical look at pound/yen, if the bulls retake control, their first target might be the recent highs around 153.50. If they pierce above it, the next region to provide resistance could be near 155.10.

On the downside, the first test for the bears would be the 150.60 barrier. Breaking below it, the market could then encounter support around the 149.30 area.