The Bank of England (BoE) held monetary policy steady at today’s announcement, but sent a subdued signal of future policy tightening in its accompanying statement. Specifically, the BoE said some modest tightening of monetary policy over the forecast period is likely to be necessary if the economy evolves in lines with its projections. The BoE also indicated the threshold for unwinding its quantitative easing purchases was lower than previously.

Those economic projections were revised higher in the central bank’s August Inflation Report. The BoE kept its GDP growth forecast for 2021 unchanged, but lifted its forecasts for 2022 and 2023. The central bank also expects year-over-year CPI inflation to reach 4.0% by Q4-2021 but to gradually ease back to 2.0% by Q4-2023.

Given a monetary policy announcement that was arguably modestly hawkish in tone, we have modestly brought forward our expected timing for the BoE’s rate hike cycle. We now forecast an initial rate increase in Q3-2022 (compared to early 2023 previously), albeit by only 15 basis points to 0.25%. We also anticipate multiple rate hikes during 2023, and would expect further cumulative rate increases of 50-75 basis points during that year.

Bank of England Happy to Hold Steady for Now

The Bank of England (BoE) announced its monetary policy decision today and, as widely expected, kept its policy stance unchanged. The BoE held its Bank Rate at 0.10% and also kept its asset purchase target at £895 billion. In addition, the central bank said that it would continue with its current £3.44 billion weekly pace of asset purchases between now and mid-December which, allowing for the reinvestment of currently held bonds that will mature in September, will see asset purchases finish on schedule by the end of this year. The decision to hold interest rates steady was unanimous, while there was only one dissent in favor of ending the asset purchase program early.

In addition to the BoE’s monetary policy decision, the accompanying Inflation Report also included the central bank’s latest economic projections. Those economic projections were relatively sturdy, reaffirming an expected GDP growth recovery and raising the central bank’s CPI inflation forecast. For GDP growth the BoE maintained its 2021 forecast at 7.25%, while for 2022 its sees GDP growth of 6% (versus 5.75% previously) and for 2023 expects GDP growth of 1.5% (versus 1.25% previously).

The revisions to the central bank’s CPI inflation forecast were even more stark. Looking at year-over-year changes, the Bank of England expects CPI inflation to spike to 4% by Q4-2021, before slowing later over the forecast horizon to 2.5% by Q4-2022 and 2.0% by Q4-2023. 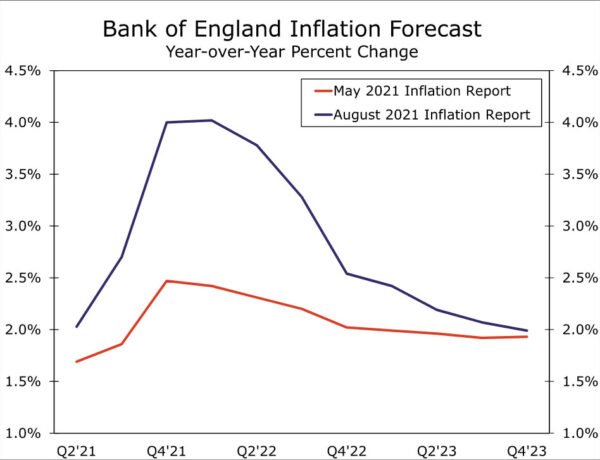 While the Bank of England was happy to remain on hold for now, given the improving economic prospects and higher inflation forecast, its announcement did offer a subdued signal of future monetary tightening. Although policymakers on the Monetary Policy Committee do not appear to be excessively concerned about a spike in inflation they anticipate will be transient, they did say that:

“The Committee judges that, should the economy evolve broadly in line with the central projections in the August Monetary Policy Report, some modest tightening of monetary policy over the forecast period is likely to be necessary to be consistent with meeting the inflation target sustainably in the medium term.”

Given a monetary policy announcement that was arguably modestly hawkish in tone, we have modestly brought forward our expected timing for the Bank of England’s rate hike cycle. We now forecast an initial rate increase in Q3-2022 (compared to early 2023 previously), albeit by only 15 basis points in 0.25%. We expect the policy rate to remain steady in Q4-2022. In addition, while beyond our formal forecast horizon we anticipate multiple rate hikes during 2023, and would expect further cumulative rate increases of 50-75 basis points during that year.