Overall markets were rather mixed for the moment. Dollar’s selloff was quickly choked off by strong ISM services overnight, even though there is no clear follow through buying. Traders are holding off the bets for now, awaiting tomorrow’s non-farm payroll figures. Sterling will come to the center of the stage today first, with BoE super Thursday. But barring the situation of drastic surprise in asset purchase voting, the event is unlikely to trigger some sustainable moves. 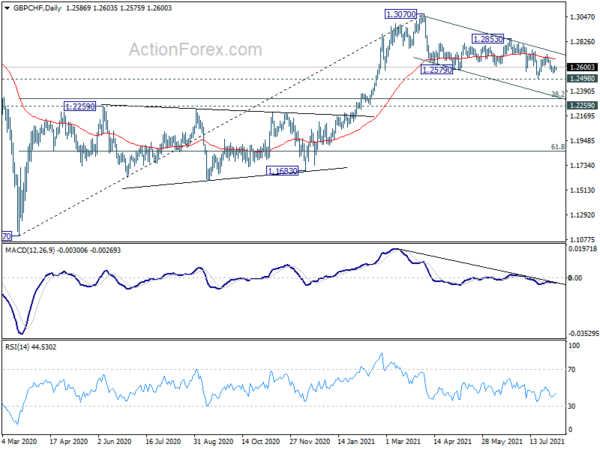 Fed Kaplan wants tapering soon, but not aggressive on rate

Dallas Fed President Robert Kaplan told Reuters that, “as long as we continue to make progress in July numbers and in August jobs numbers, I think we’d be better off to start adjusting these purchases soon,” referring to the QE program.

He added that tapering over a time frame of “plus or minus” about eight months would help give the Fed ” as much flexibility as possible to be patient and be flexible on the Fed funds rate.”

San Francisco Fed President Mary Daly said in a PBS interview, she didn’t expect the Delta variant to “derail recovery” in the US. nevertheless, “it’s already very seriously interrupting the recoveries in the global economy,” which is a “headwind on US growth.

She’s looking for “continued progress in the labor market, continued putting COVID behind us, rising vaccination rates, the things that are so fundamental to us saying that the economy has achieved that metric of substantial further progress.”

Fed Clarida: Will provide advance notice before making any changes to purchases

Fed Vice Chair Richard Clarida said in a speech that “we are clearly a ways away from considering raising interest rates and this is certainly not something on the radar screen right now”.

If outlook of inflation and unemployment turn out to be the actual outcomes, the necessary conditions for raising federal funds rate “will have been met by year-end 2022.” If inflation remain well anchored at 2%, commencing policy normalization in 2023 would then be “entirely consistent with our new flexible average inflation targeting framework.”

As for asset purchases, he said FOMC members expected the economy to continue to move toward the standard of “substantial further progress.”

FOMC will asses the progress in coming meetings. He reiterated the pledge that, “we will provide advance notice before making any changes to our purchases.”

Australia trade surplus widened to AUD 10.2B in Jun

BoE to remain upbeat on outlook, GBP/CHF trading with undertone

No policy change is expected from BoE today. But recent development suggests that policymakers would remain upbeat about the economic outlook. Upgrades in the near-term GDP growth and inflation forecasts are likely. The development to keep Bank Rate unchanged at 0.10% should be unanimous. Yet, the vote on maintaining asset purchase target at GBP 895B would be divided. Michael Saunders and Dave Ramsden could vote for an early end to the program. At the May and June meetings, the now-departed Chief Economist, Andy Haldane, was the only member dissenting to leave the size of QE purchases unchanged.

GBP/CHF continues to trade with an undertone for the near term, as recoveries were limited by 55 day EMA. At this point the choppy correction from 1.3070 is still in favor to continue. Break of 1.2498 support would target 1.2259 key resistance turned support next. 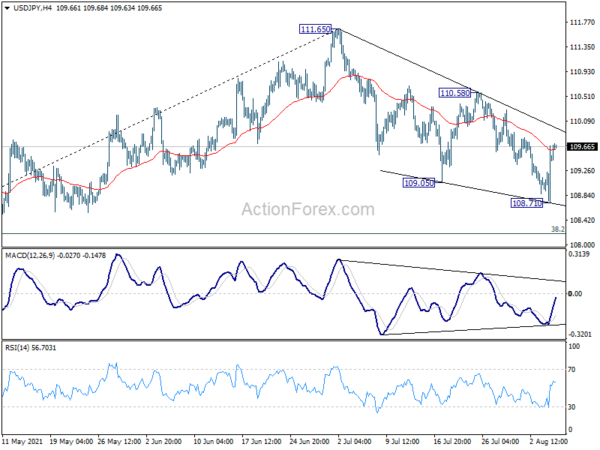 In the bigger picture, medium term outlook is staying neutral with 111.71 resistance intact. Firm break of 107.47 will argue that pattern from 101.18 has started another falling leg already. Deeper decline could be seen back to 101.18/102.58 support zone. For now, outlook won’t turn bullish as long as 111.71 resistance holds, even in case of strong rebound. 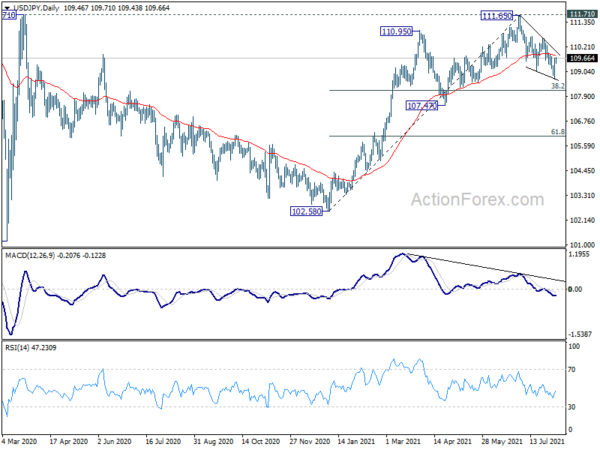