Dollar’s rally continued last week as supported by hawkish comments from Fed officials. Expectations for tapering this fall continued to build up. Swiss Franc is trading broadly lower, as the pull back against Euro accelerated. Meanwhile, Australian is also trading lower on poor business confidence data. Focus will turn to Germany economic sentiment first, with an eye on any more comments from Fed officials.

Atlanta Fed President Raphael Bostic said yesterday, “we are well on the road to substantial progress toward our goal”, and July’s 943k job growth was “definitely quite encouraging in that regard.”

“My sense is if we are able to continue this for the next month or two I think we would have made the ‘substantial progress’ toward the goal and should be thinking about what our new policy position should be,” he said.

“Right now I’m thinking in the October-to-December range, but if the number comes back big” as with the last report “or maybe even a little bigger, I’d be open to moving it forward,” Bostic said. “If the number really explodes, I think we would have to consider that.”

Also, he said he favored a “balanced” approach on tapering both the MBS and treasuries purchases at the same fate, and “going relatively fast”. “The economy is in a much different place today” and “I am pretty confident these markets are going to continue to function even with a more rapid withdrawal, and I would be willing to lean into that to try to get us to complete the taper in a shorter period than what we have done in previous rounds.”

Boston Fed President Eric Rosengren said yesterday if the US continues to have job growth like the last two months, with “very substantial payroll employment gains”, then by September meeting, the “substantial further progress” criteria should be met. That would “imply starting to taper sometime this fall”.

“If you continue to purchase assets, the reaction primarily is in pricing, not so much in employment,” he added. “I don’t think asset purchases are having the desired impact on really promoting employment.”

NAB said: “The continuing lockdown in NSW and the briefer periods of disruption across a number of other states saw a further deterioration in activity in the business sector in July… Confidence took a big hit in the month with optimism collapsing on the back of ongoing restrictions.”

“It is now widely expected that we will see a negative print for GDP in Q3. However, we know that once restrictions are removed that the economy has tended to rebound relatively quickly. We will continue to track the survey very closely for an indication of just how quickly that happens – particularly forward orders and capacity utilisation as we assess how the disruption has fed into expansion plans as conditions bounce back”.

Looking ahead, Germany ZEW economic sentiment is the major focus in European session. US will release non-farm productivity and unit labor costs later in the day. 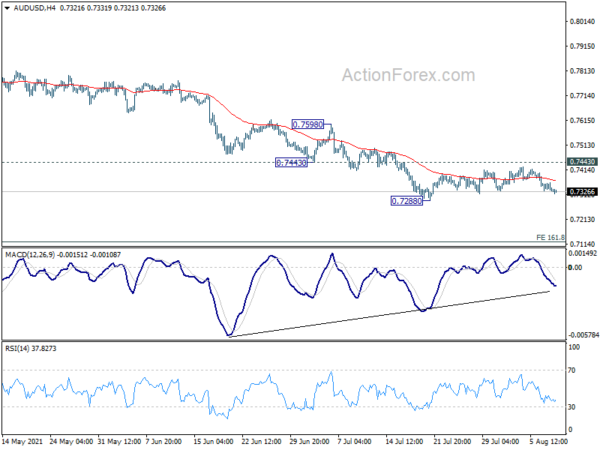 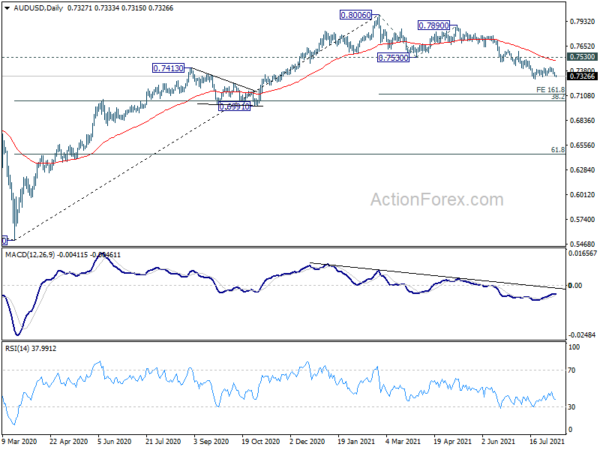