Pace Of US CPI Inflation To Test Dollar Bulls

While the Fed has distinctly stated that a potential shift in monetary tightening is strictly conditional on whether the US labor market will make significant progress, US CPI inflation figures could still be worth watching on Wednesday at 12:30 GMT. Forecasts are for a minor slowdown in July’s figures, which makes any deviations possible. An upside surprise could add pressure for monetary tightening as soon as September, providing more fuel to dollar bulls and vice versa.

According to inflation swap rates, inflation expectations have moderately diminished from recent peaks in the US, signalling that investors have somewhat swallowed the Fed’s excuse of transitory inflation despite the recent surge in price indices. 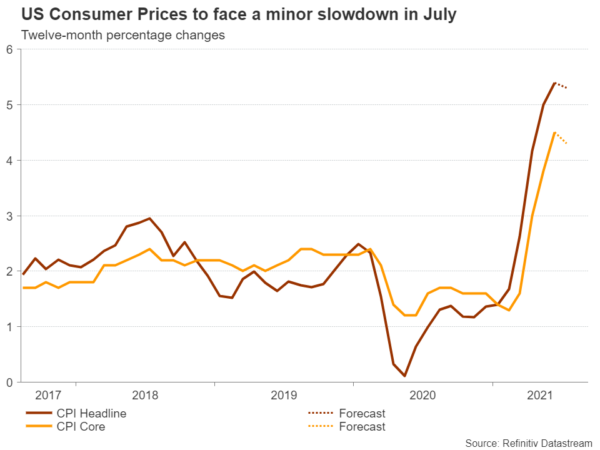 Inflation spikes not a worry anymore for Fed

The Fed’s favorite inflation measure, the core PCE index, has been up and running since April, marking highs after highs above 2.0%, which was the central bank’s upper limit before the switch to a more flexible targeting. The core CPI inflation followed a similar pattern, but the pace of increases was steeper, leading the gauge to a 30-year high of 4.5% year-on-year in June, while the broader headline CPI clocked in even higher at 5.4% y/y.

Under other circumstances, the Fed would have immediately abandoned its ultra-easy stimulus programs with scope to press inflation back to the 2.0% target. But this is not the case anymore. Its new inflation approach is now allowing prices to heat above 2.0% for some time until they average around this threshold in the medium term before any move to policy tightening takes place. On top of this, the central bank believes that the spiral in prices is a transitory phenomenon underpinned by the pandemic blues, implying that once the economy returns to normal life and supply constraints vanish, price growth would pull back below 2.0%.

The above reasoning is justifying the dollar’s muted reaction to inflation numbers over the past few months. Perhaps, as long as the Fed is not sweating and the labor market remains the elephant in the room, investors could be less sensitive to any inflation numbers. However, if the jobs data reach the desired level in the next few months and inflation remains stuck at high levels, forcing the Fed to bring forward any bond tapering plans, the dollar could get an extra boost.

Another interesting scenario would be if inflation loses steam as base effects fade, but consumer prices remain at high levels, weighing on demand for products and services. But this is another story!

Nevertheless, CPI stats for the month of July are expected to rise at a softer pace on Wednesday. The headline CPI is forecast to gear marginally down to 5.3% y/y from 5.4% previously, while the core measure, which excludes volatile items such as food and energy, is projected to slip to 4.3% y/y from 4.5%. The monthly change is expected to slow down at a faster pace, falling from 0.9% to 0.5%.

The above projections suggest a minimal pullback, which could still leave price indices elevated comfortably above 2.0%. Hence, such a result would not affect the dollar much. Probably, a sharper-than-expected slowdown could defend the Fed’s transitory explanation and vindicate the falling inflation expectations, reducing the need for tighter monetary policy, and consequently sending dollar/yen back to the nearby 109.73 support area. Lower, the door would open for the 109.00 mark.

Alternatively, if CPI numbers run surprisingly beyond forecasts, extending their uptrend above 2.0% for the fifth consecutive month, calls for monetary tightening could step up within the central bank, but given the Fed’s overall calm tone, any upside correction in dollar/yen could be restricted. Should the pair close above 110.40, the next obstacle could emerge near 110.95 and then around 111.70.

Recall that July’s ISM business PMI survey reported a significant price surge in the services sector, which is a key growth driver in the US economy. Hence, an upside surprise is theoretically likely.