Commodity currencies remained generally pressured in Asian session today. While DOW and S&P 500 managed to reverse initial losses to close at new record highs, there is no follow through risk-on sentiment in Asia. Canadian Dollar is additionally weighed down with WTI crude oil dipping below 68 handle. Aussie is getting not particular support from the balanced RBA minutes. Yen and Swiss Franc are still the stronger ones, but Dollar is trying to catch up, against others.

Technically, USD/CAD is now eyeing 1.2605 minor resistance as rebound from 1.2421 resumes. Firm break there will suggest that pull back from 1.2805 has already completed and bring retest of this high. At the same time, AUD/USD is dipping towards 0.7288 low. Break there will resume the larger decline from 0.8006. Both developments could signal further selling in commodity currencies elsewhere. 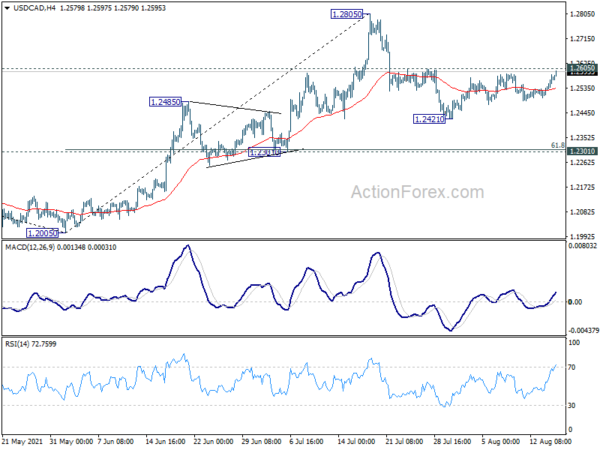 In the minutes of August 3 meeting, RBA said recent outbreaks of the Delta variant of had “interrupted the recovery”. But the economy entered lockdowns with “more momentum than previously expected”, with fiscal and monetary support already cushion the economic effects. It added, “experience to date had been that, once virus outbreaks were contained, the economy bounced back quickly.” The “central scenario” was still for the economy to “growth strongly again next year”.

Committee members considered the case to delay tapering of asset purchases to AUD 4B a week scheduled for September. But they noted that additional bond purchases would only have a “marginal effect” at present”, but “maximum effect” during the resumption of strong growth in 2022. Also fiscal policy is recognized as a “more appropriate instrument” in response to a “temporary, localized reduction in incomes”. Thus, the Board reaffirmed the previously announced schedule for tapering.

RBA also reiterated that the condition for raising interest rate is not expected to be met before 2024. “Meeting this condition will require the labour market to be tight enough to generate wages growth that is materially higher than it is currently,” it said.

Boston Fed President Eric Rosengren said the US had over 900k jobs growth for two months in a row and unemployment rate dropped by half a percent to 5.4%. He added, “if we get another strong labor market report, I think that I would be supportive of announcing in September that we are ready to start the taper program.”

“I think it’s appropriate to start in the fall. That would be October or November,” Rosengren told CNBC. “I certainly wouldn’t want to wait any later than December. My preference would be probably for sooner rather than later.” He also said that “there’s no reason to drag it out as long as the economy continues to progress as we expect.”

On the other hand, he’d prefer to see more progress before moving on to raising interest rate. “The criteria for starting to raise rates is that we see outcomes that are consistent with sustainable inflation at a little bit above 2%,” he reiterated Fed’s general position.

UK employment data and Eurozone GDP will be featured in European session. Canada housing starts and foreign securities purchases will be released later in the day. But main focus will be on US retail sales, while industrial production, business inventories and NAHB housing index will be released too. 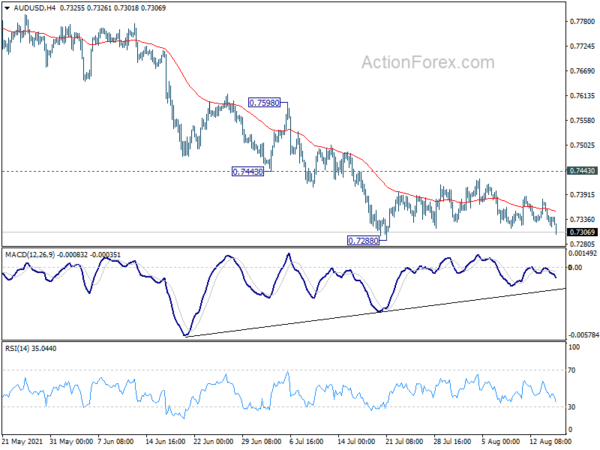 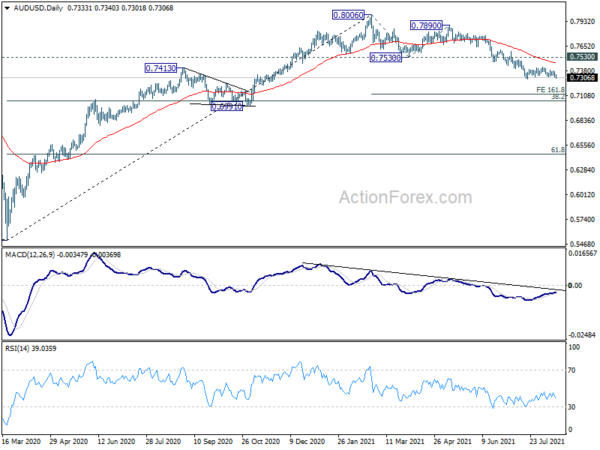