Souring risk sentiment continues to support Swiss Franc and Yen today, while Dollar is also trying to catch up. Commodity currencies are still the weakest ones. In particular, New Zealand Dollar tumbles on talks that RBNZ could refrain from delivering the highly anticipated rate hike tomorrow, as the country returned to pandemic lockdown. Fresh selling is also seen in Euro and Sterling, we markets enter into US session. 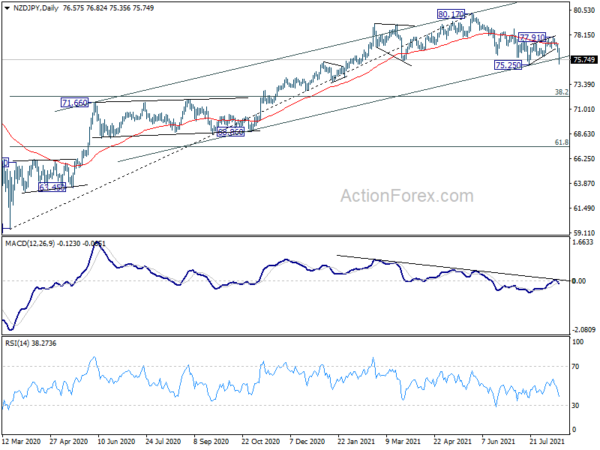 From Canada, housing starts dropped to 272k in July, below expectation of 275k. Foreign securities purchases dropped to CAD 19.63B in June.

In the minutes of August 3 meeting, RBA said recent outbreaks of the Delta variant of had “interrupted the recovery”. But the economy entered lockdowns with “more momentum than previously expected”, with fiscal and monetary support already cushion the economic effects. It added, “experience to date had been that, once virus outbreaks were contained, the economy bounced back quickly.” The “central scenario” was still for the economy to “growth strongly again next year”.

Committee members considered the case to delay tapering of asset purchases to AUD 4B a week scheduled for September. But they noted that additional bond purchases would only have a “marginal effect” at present”, but “maximum effect” during the resumption of strong growth in 2022. Also fiscal policy is recognized as a “more appropriate instrument” in response to a “temporary, localized reduction in incomes”. Thus, the Board reaffirmed the previously announced schedule for tapering.

RBA also reiterated that the condition for raising interest rate is not expected to be met before 2024. “Meeting this condition will require the labour market to be tight enough to generate wages growth that is materially higher than it is currently,” it said.

Intraday bias in EUR/USD is turned neutral with the current retreat. On the upside, above 1.1804 will resume the rebound from 1.1705 to 1.1907 near term structural resistance. On the downside, however, break of 1.1705 will resume larger fall to 1.1602/1703 key support zone again. We’d look for strong support from there to rebound, but sustained break will carry larger bearish implication. 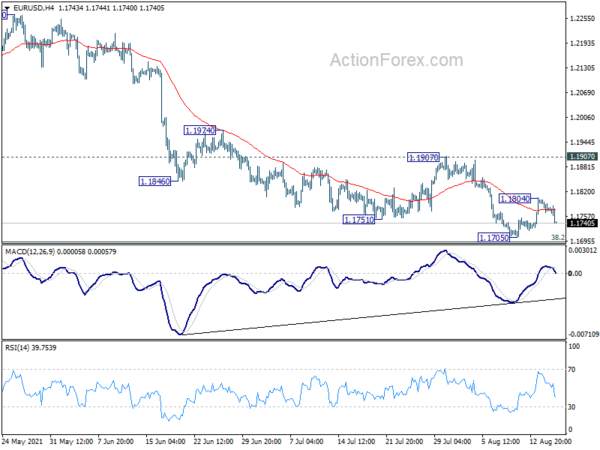 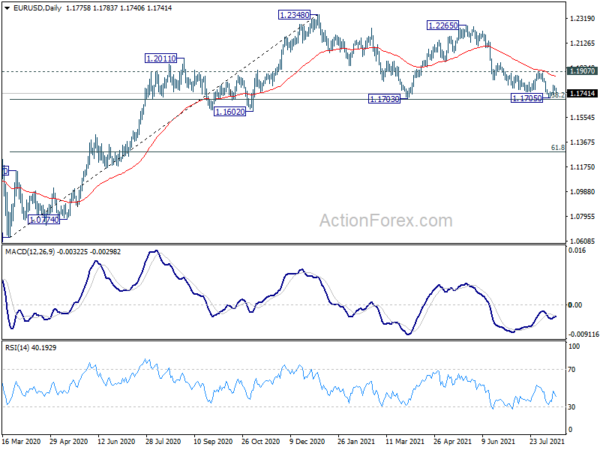