Dollar rises broadly again risk sentiment turned sour again. While Yen and Swiss Franc are still firm elsewhere, the greenback has overtaken their top position for the week. Meanwhile, commodity currencies remain the worst performing ones, as led by New Zealand Dollar, closely followed by Australian Dollar. Euro and Sterling are mixed for the moment.

Technically, EUR/USD is finally moving away from 1.1705 support as selling accelerates. Focus is turned to 1.1602 support next and bring there will carry larger bearish implications. We’d also pay attention to the development in Gold. Break of 1770.68 support will suggest rejection by 1800 handle, and bring deeper fall. That would be another signal of Dollar’s strength if happens. 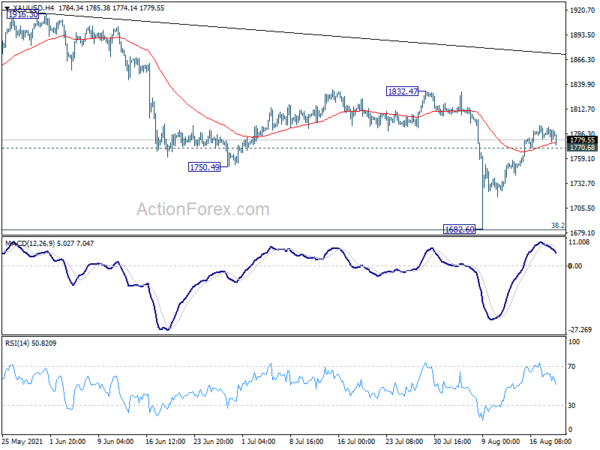 “Most participant” said provided that the economy were to “evolve broadly as they anticipated”, it could be “appropriate” to start tapering “this year”. “Various participants” said the economic and financial conditions would likely warrant a reduction in purchase “in coming months”.

But “several others” indicated that tapering would more likely to be become appropriate “early next year”, as they saw prevailing conditions in labor market as not being close to the “substantial further progress” standard, or due to the “uncertainty” about progress on price stability.

Australia unemployment rate dropped to 4.6%, people falling out of the labour force

Bjorn Jarvis, head of labour statistics at the ABS, said: “Early in the pandemic we saw large falls in participation, which we have again seen in recent lockdowns. Beyond people losing their jobs, we have also seen unemployed people drop out of the labour force,”

Australian Dollar continues to trade as the second worst performing one, just next to New Zealand Dollar, this week. New South Wales just reported record 681 daily new delta cases and another death, while regional lockdown has been extended until August 28, in line with Greater Sydney. Victoria reported 57 new cases as Melbourne is in tough restrictions until at least September 2. Overall, weaker risk-sentiment is also weighing on Aussie, after DOW’s -1% fall overnight.

AUD/JPY is one of the biggest movers this week, and is on track to continue with the decline from 85.78. Such fall is seen as a correction to the up trend from 59.89 for the moment. Next target is 78.44 resistance support, and then 38.2% retracement of 59.89 to 85.78 at 75.89. We’d tentatively look for some support from there to bring rebound. But in any case, break of 81.56 resistance is needed to indicate completion of the decline. Or, near term outlook will stay bearish in case of recovery. 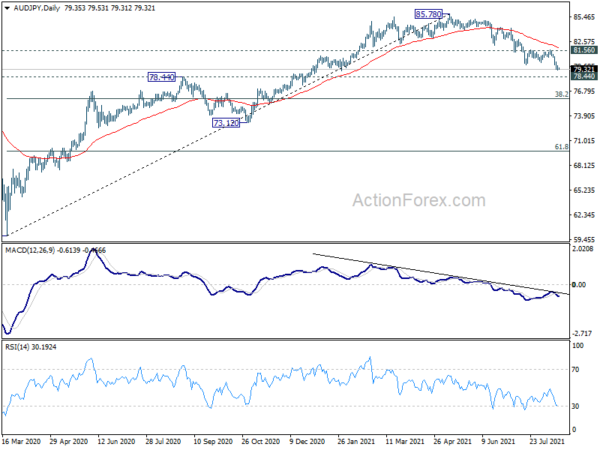 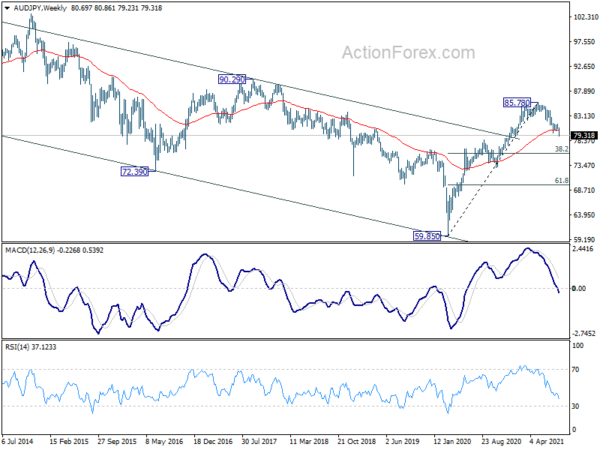 Swiss trade balance and Eurozone current account will released in European session. Later in the day, Canada will release ADP employment. US will release jobless claims and Philly Fed survey.

AUD/USD drops to as low as 1.1665 so today and intraday bias remains on the downside. We’d continue to look for strong support from 1.1602/1703 support zone to bring rebound. On the upside, above 1.1804 resistance will turn bias back to the upside for 1.1907 resistance first. however, sustained break of 1.1602/1703 will carry larger bearish implication and pave the way to 1.1289 fibonacci support. 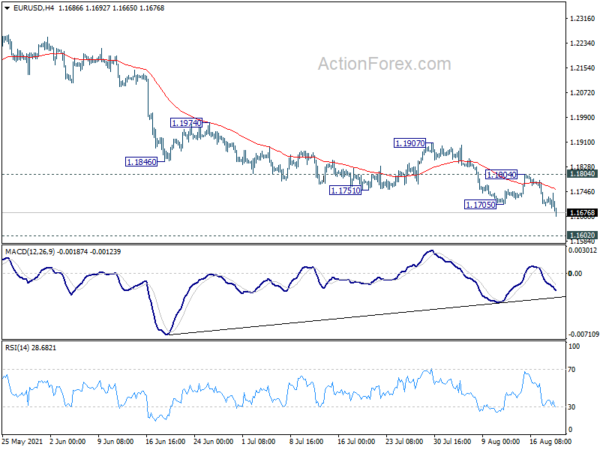 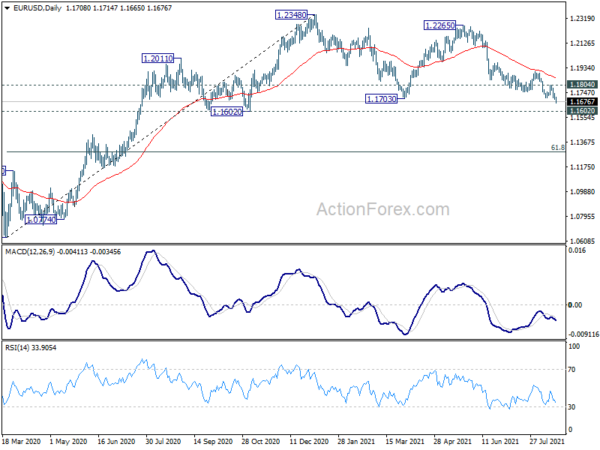