What Will the Fed Signal at Jackson Hole?

The Federal Reserve’s annual economic symposium will come to a crescendo when Chairman Powell speaks on Friday at 14:00 GMT. There was a lot of buzz that the Fed would use this event to warn it will dial back its asset purchases soon, but markets are thinking otherwise now thanks to the raging Delta outbreak. Despite the delay, it’s only a matter of time until the Fed tapers, which is what matters most for the dollar.

The US economic machine is starting to heat up. Consumption has been impressive, inflation is scorching hot, and lost jobs are coming back at an incredible pace. In fact, the American economy is already bigger than it was before the crisis hit and Congress is about to unleash another massive round of spending. 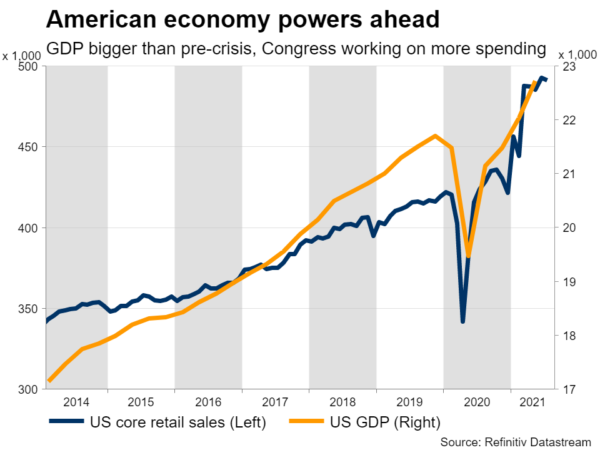 And yet, markets seem to have concluded Chairman Powell will play it slow this week, postponing any real decisions on tapering until the next Fed meeting in September. Powell recently downplayed the Delta outbreak as being a major economic risk, but infections have soared since then, forcing the Fed to take its Jackson Hole symposium virtual.

This was seen as a signal in itself. If policymakers can’t even attend their own summer camp in person, that highlights the various risks, lowering the chances of an immediate taper. 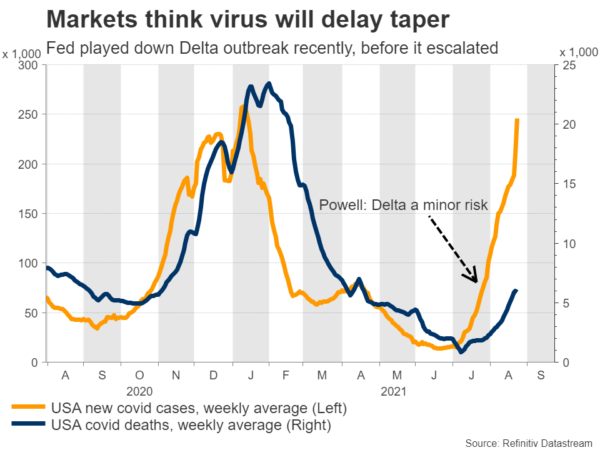 Echoing this view recently was the Fed’s Kaplan. He’s been the biggest advocate of announcing tapering in September, but even he put water in his wine last week, saying he could adjust his views if the Delta outbreak hits economic growth.

Therefore, it looks like Powell won’t be committing to anything this week. The most likely scenario is that he hedges his bets, indicating that the normalization process could begin later this year, although that will depend on the evolution of the Delta outbreak.

There are also some early signs that the US economy is losing momentum, with the latest composite Markit PMI for instance falling sharply in August as supply chain disruptions worsened and consumers turned more defensive.

That said, the wheels are not coming off either. A minor economic slowdown is only natural now that some of the earlier government support programs are rolling off, especially with the virus flaring up. It’s only a speed bump, so far. 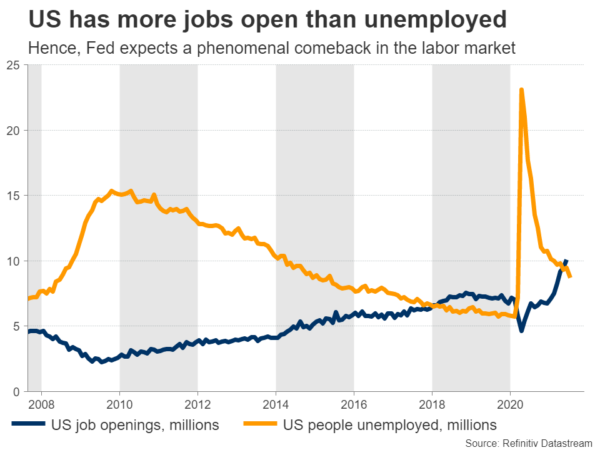 It now looks like September might be a little too early for the Fed to push the taper button, unless the next jobs report is absolutely sensational. But November is still very much in play. We’ll have a good sense of whether the Delta wave has kneecapped economic activity by then, and Congress may have already delivered more fiscal juice to boost growth.

Turning to the markets, if Powell doesn’t signal anything is coming in September, the dollar will likely take a hit. However, any weakness could be minor, as investors seem to expect that much already. In this case, euro/dollar could pierce above the 1.1750 zone and head towards the 1.1800 region.

In the bigger picture, it doesn’t really matter whether tapering is announced in September, November, or even December. It’s only a matter of time.

The crucial part is that the Fed is years ahead of the European Central Bank and the Bank of Japan in the normalization race. Over time, this could allow US yields to rise faster, making the dollar more attractive against the euro and yen as rate differentials widen to its benefit and investors rediscover carry trades.

This could ultimately push euro/dollar below 1.1705, and turn the spotlight to the recent low of 1.1665.

Finally, there’s also a barrage of US data releases coming up. Durable goods orders for July are out on Wednesday, before the second estimate of GDP for Q2 on Thursday. Personal income and consumption numbers, alongside the Fed’s favorite inflation metric for July, will hit the markets before Powell speaks on Friday.