The Euro is slightly bid in early Friday but lack of firmer signals keeps near-term action directionless for the third straight day.

All eyes are on the speech of Fed Chair Powell, due later today, as traders look for hints for timing of the start of tapering and central bank’s next steps regarding interest rates, although economists think it’s unlikely that Powell will provide any concrete signal.

Mixed daily studies (the action is ranging between 10 and 30DMA’s, momentum is breaking into positive territory, stochastic is about to reverse from overbought zone) do not provide direction signal, but initial positive signal is developing on weekly chart.

However, fresh bulls need break above 1.1800 resistance zone to generate initial signal and expose next key barriers at 1.1838 (daily cloud base) and 1.1905 (July 30 high), violation of which would signal stronger correction.

On the other side, larger downtrend remains intact and failure under pivotal resistances would increase risk of recovery stall and fresh weakness, as safe-have dollar remains supported by worsened situation in Afghanistan, with more dovish than expected tone from Powell, to add to negative signals for the single currency. 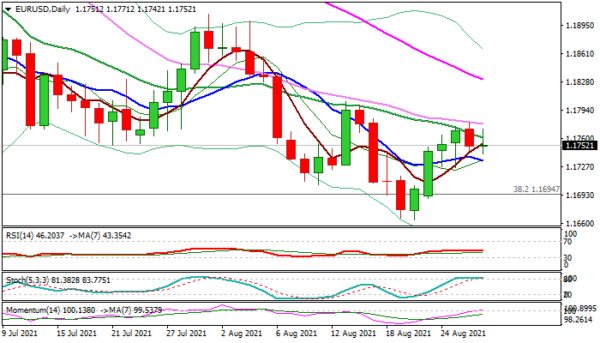