Selling of Dollar picks up momentum again in Asia today, with EUR/USD breaking through 1.18 handle finally. On the other hand, New Zealand Dollar is staging a notable rebound as Covid case number dropped to the lowest level in six days. The markets are mixed elsewhere though, with some additional strength see in Euro, followed by Sterling. Canadian and Australia Dollars are lagging behind the Kiwi.

Japan industrial production dropped -1.5% mom in Jul, but expected to bounce back ahead

Japan industrial production dropped -1.5% mom in July, better than expectation of -2.5% mom. The overall output was back below pre-pandemic levels already. The Ministry of Economy, Trade and Industry expects, however, a bounce back of 3.4% in production in August, and 1.0% in September.

Unemployment rate ticked down to 2.8%, better than expectation of 2.9%.

“This epidemic in multiple provinces and locations was a fairly big shock to the services industry, which is still in recovery,” said Zhao Qinghe, of China’s National Bureau of Statistics.

ANZ also noted while Delta is a “formidable opponent”, there are some reasons to the “glass-half-full about the situation”. The economy had “significant momentum” going into the lockdown. People will be a lot more confidence than last time regarding their job. Also evidence there and overseas suggests that the bounce out of lockdowns tends to be vigorous. But it’s still too soon to be sure when the level 4 restrictions will stamp out Delta.

France GDP, Germany unemployment, UK mortgage approvals will be released in European session. But main focus will be in Eurozone CPI flash. Later in the day, Canada will release GDP. US will release house price index, Chicago PMI, and more importantly consumer confidence.

EUR/USD’s break of 1.1804 resistance should now confirm short term bottoming at 1.1663, on bullish convergence condition in 4 hour MACD. Intraday bias is back on the upside for 1.1907 resistance first. Firm break there will indicate that fall from 1.2265, as well as the consolidation pattern from 1.2348, have completed. Near term outlook will be turned bullish for 1.2265/2348 resistance On the downside, break of 1.1734 minor support will turn focus back to 1.1602/1703 key support zone instead. 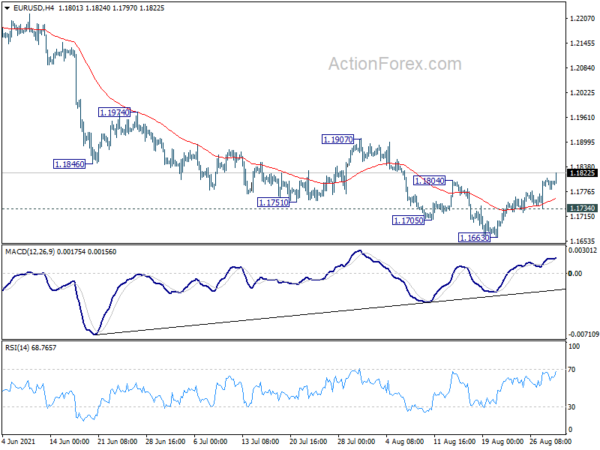 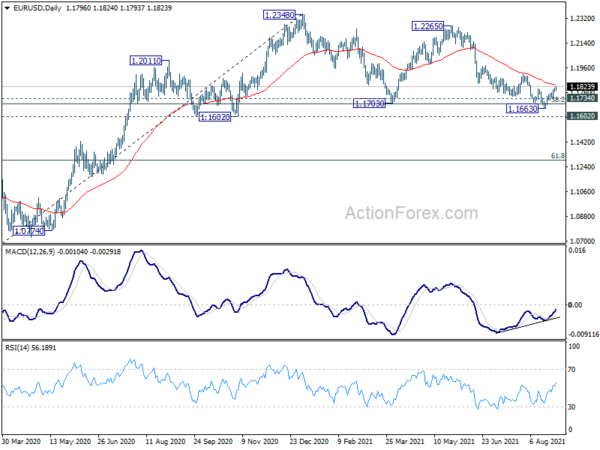