Currency Pair Of The Week: AUD/USD Testing Resistance Ahead Of Key Data Releases

As my colleague Tony Sycamore noted earlier today, Australian traders will be closely monitoring the release of the country’s Q2 GDP report. Although the data precedes the ongoing lockdowns in Sydney and Victoria, it “…is expected to garner serious media attention because a heavy contraction in GDP in Q3 is already guaranteed due to lockdowns.” Later in the week, traders will refocus their attention on the country’s July retail sales release, which is expected to decline -1.9% m/m.

Meanwhile, on the other side of the Atlantic, there is also plenty of US data scheduled for release. The highlight will be Friday’s Non-Farm Payrolls (NFP) report, though the US PMI surveys and ADP employment report will also merit close attention, especially in the wake of last week’s cautious economic assessment by Fed Chairman Jerome Powell at the Jackson Hole Economic Symposium.

With major economic data releases out of both the US and Australia, FX traders will be keying in on AUD/USD as arguably the most important currency pair to watch this week. From a technical perspective, the pair rallied back from year-to-date lows near 0.7100 last week all the way up to trade near 0.7300 as of writing.

Notably, the 0.7325 level was a key area of support through late July and early August, and that previous level of support is now likely to become a future area of resistance. Meanwhile, the 21-day EMA (light blue) has consistently capped short-term rallies in AUD/USD since mid-June, further strengthening the 0.7300-25 zone of resistance: 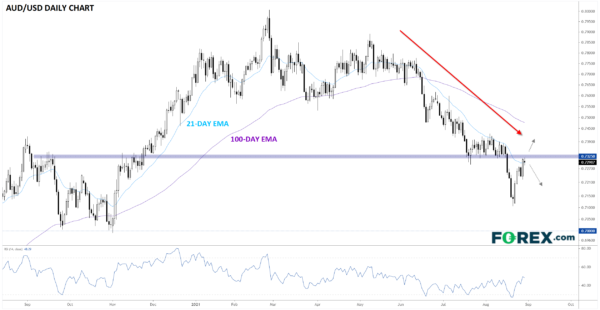 With rates still holding below 0.7325 as we go to press, the current bias in AUD/USD remains to the downside despite last week’s sharp rally. If rates show signs of rolling over this week, especially if supported by weak Australian or strong US data, bears may look to enter AUD/USD shorts targeting a retracement of last week’s rally toward 0.7200 or 0.7100. On the other hand, a confirmed breakout above 0.7325 would flip the near-term bias in favor of the bulls for a continuation toward 0.7400 next.