Dollar recovers broadly today, as the near term decline lost momentum. Selling focus is turned to Yen and Swiss Franc instead. Traders are now awaiting key economic indicators from the US, while would start with ADP employment and ISM manufacturing today, to be completed with non-farm payrolls and ISM non-manufacturing on Friday. These data have the potential to trigger some wild volatility, given that Fed’s timing for tapering would be heavily dependent on them, in particular the job market performance.

Technically, the loss of downside momentum in Dollar is reflected in Gold too, which stalled ahead of 1832.47 resistance. Bullish bias is maintained as it stands in tight range above 1800 handle, as well as 4 hour 55 EMA. We’d continue to use gold to double confirm the movement in the greenback in ahead. Break of 1832.47 resistance should indicate underlying selling in Dollar. However, break of 1779.91 support will indicate completion of rebound from 1682.60, and suggest that Dollar is striking a comeback elsewhere. 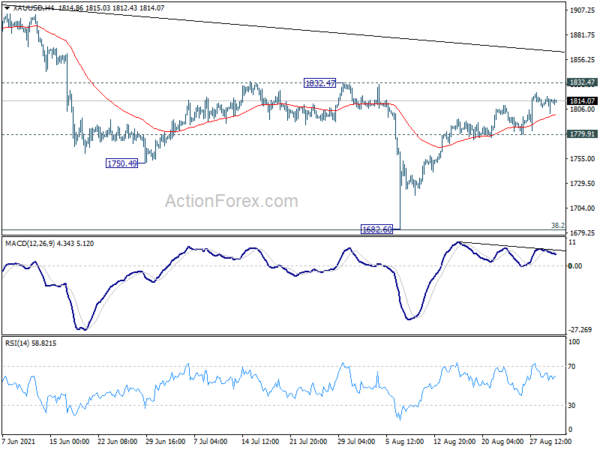 ECB Vice President Luis de Guindos told a Spanish newspaper, “the economy is performing better in 2021 than we expected, and this will be reflected in the projections that will be published in the coming days.”

“If inflation and the economy recover, then there will logically be a gradual normalization of monetary policy, and of fiscal policy too,” he added.

Australia GDP grew 0.7% qoq in Q2, above expectation of 0.5% qoq. Over 2020-21, the economy grew 1.4%. Head of National Accounts at the ABS, Michael Smedes said: “Domestic demand drove growth of 0.7 per cent this quarter which saw continued growth across household spending, private investment and public sector expenditure. Lockdowns had minimal impact on domestic demand, with fewer lockdown days and the prolonged stay at home orders in NSW only commencing later in the quarter”.

Ai Group Chief Executive Innes Willox said: “August saw a steep retreat from the healthy expansion in manufacturing performance that has characterised most of this year. Lockdowns across the country, particularly in NSW and Victoria were the major detractor from performance with ongoing strength outside of these states sufficiently strong to maintain the national performance in positive territory (although by a slim margin).

BoJ Deputy Governor Masazumi Wakatabe said in a speech, the Japan economy has remained in a “severe state”. But the bank judged that “pick-up trend in the economy as a whole has been maintained, supported by positive developments in the corporate sector on the back of a firm recovery in overseas economies”.

“Positive developments are likely to spread from the corporate sector to the household sector as the impact of COVID-19 wanes gradually, mainly due to progress with vaccinations,” he added. “The economic recovery is expected to become clear.”

The key to realizing the positive outlook is “whether a virtuous cycle operates firmly”. That is, “whether an increase in domestic and overseas demand expands household income and corporate profits, and in turn leads to a further rise in spending”.

Japan PMI Manufacturing was finalized at 52.7 in August, just slightly down from July’s 53.0. Markit said output and new orders increased and slower rates. Export orders declined for the first time in seven months. Lead times lengthened to greatest extent in a decade amid ongoing disruption.

Usamah Bhatti, Economist at IHS Markit, said: “Latest PMI data pointed to a sustained expansion in the Japanese manufacturing sector midway through the third quarter…. A sharp rise COVID-19 cases in South East Asia was among the key factors listed by Japanese manufacturers for the easing in demand, both domestically and externally… Concurrently, severe supply chain disruption partly caused by pandemic restrictions and raw material shortages remained a dampener on production and orders.”

Wang Zhe, Senior Economist at Caixin Insight Group said: “The latest Covid-19 resurgence has posed a severe challenge to the economic normalization that began in the second quarter of last year… Official economic indicators for July were worse than the market expected, indicating mounting downward pressure on economic growth. Authorities need to take a holistic view and balance containing Covid-19, stabilizing the job market, and maintaining stability in supply and prices.”

Intraday bias in EUR/JPY remains on the upside for the moment. Rebound from 127.91 short term bottom is in progress for 130.54 resistance. Sustained break there will argue that whole correction from 134.11 has completed and turn near term outlook bullish. Nevertheless, on the downside, below 129.14 minor support will turn bias back to the downside for retesting 127.91 low instead. 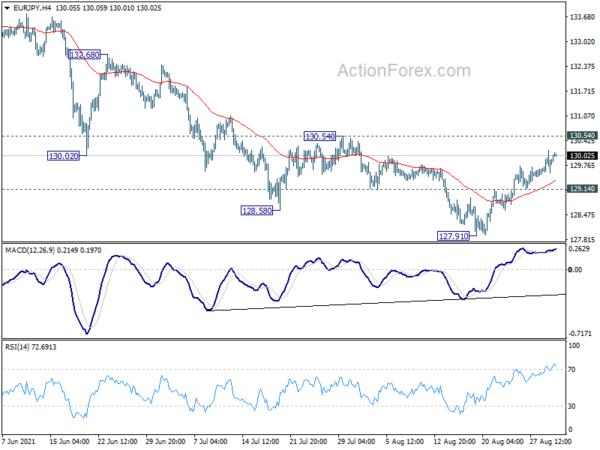 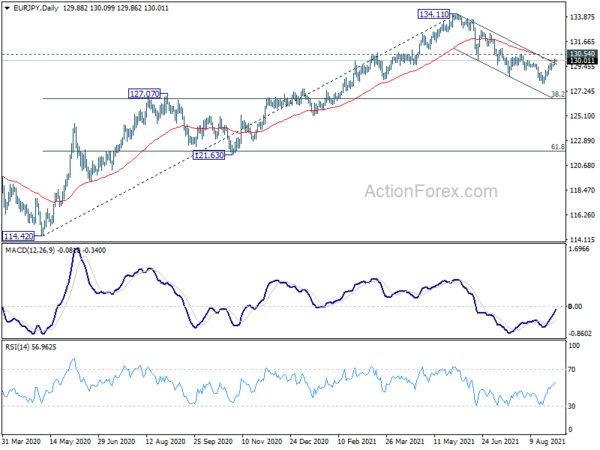