Dollar weakens mildly in early US session after big ADP job data miss. But Swiss Franc and Yen remain the weaker ones. Euro and Sterling firm up mildly. But they are outshone by Aussie and Loonie for the moment. Overall movements in the currency markets are limited, except in some Yen crosses. Traders are still generally cautious, awaiting more economic data from the US later in the weak.

Technically, we’ll turn our focus to some Yen crosses first, as Dollar’s move might be half-hearted before non-farm payroll data. EUR/JPY is now eyeing 130.54 resistance. Decisive break there will suggest completion of corrective fall from 134.11 at 127.91. Outlook will be turned bullish for retesting 134.11. Similarly, firm break of 81.56 resistance in AUD/JPY will also suggest completion of correction from 85.78, and turn near term outlook bullish for retesting 85.78 high. 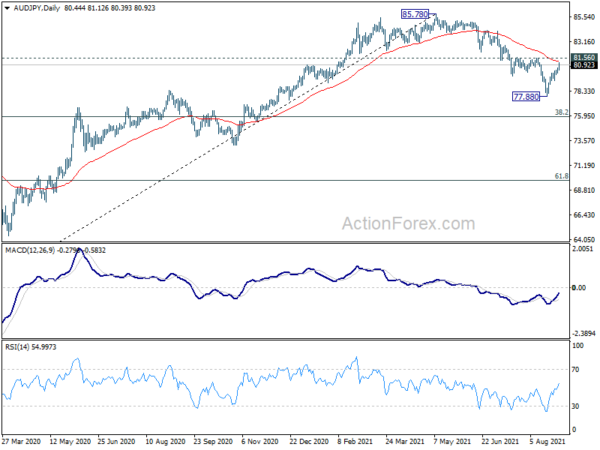 US ADP jobs grew 374k only, downshift in recovery

“Our data, which represents all workers on a company’s payroll, has highlighted a downshift in the labor market recovery. We have seen a decline in new hires, following significant job growth from the first half of the year,” said Nela Richardson, chief economist, ADP.

“Despite the slowdown, job gains are approaching 4 million this year, yet still 7 million jobs short of pre-COVID-19 levels. Service providers continue to lead growth, although the Delta variant creates uncertainty for this sector. Job gains across company sizes grew in lockstep, with small businesses trailing a bit more than usual.”

ECB Stournaras: Recent jump in inflation is due to temporary factors

ECB Governing Council member, Bank of Greece Governor, Yannis Stournaras told Bloomberg, “according to most estimates, the recent jump in inflation is due to temporary factors related to various supply-side bottlenecks caused by the pandemic.”

“Wage developments and unit labor costs which determine the core of inflation do not show the same volatility as headline inflation,” he added. “On this evidence, I would advise caution regarding the course of inflation relative to our medium-term target.”

Eurozone unemployment rate dropped to 7.6% in July, EU down to 6.9%

Eurozone PMI manufacturing finalized at 61.4 in Aug, another month of buoyant production

Chris Williamson, Chief Business Economist at IHS Markit said: “Eurozone manufacturers reported another month of buoyant production in August, continuing the growth spurt into its fourteenth successive month. The overriding issue was again a lack of components, however, with suppliers either unable to produce enough parts or are facing a lack of shipping capacity to meet logistics demand.

“These supply issues were the primary cause of a shortfall of manufacturing production relative to orders of a magnitude not previously recorded by the survey, surpassing the 24-year record deficit seen in July.”

Rob Dobson, Director at IHS Markit, said: “Severe disruptions to supply chains and raw material shortages eroded the growth momentum of UK manufacturing in August…. With all of these factors likely to persist for the foreseeable future, manufacturing could well see a further growth slowdown in the coming months…. The impact of supply issues is also feeding through to rapid price inflation… Business confidence remained elevated despite the widespread shortages as firms focused on the longer-term outlook and brought back furloughed workers.”

Australia GDP grew 0.7% qoq in Q2, above expectation of 0.5% qoq. Over 2020-21, the economy grew 1.4%. Head of National Accounts at the ABS, Michael Smedes said: “Domestic demand drove growth of 0.7 per cent this quarter which saw continued growth across household spending, private investment and public sector expenditure. Lockdowns had minimal impact on domestic demand, with fewer lockdown days and the prolonged stay at home orders in NSW only commencing later in the quarter”.

Ai Group Chief Executive Innes Willox said: “August saw a steep retreat from the healthy expansion in manufacturing performance that has characterised most of this year. Lockdowns across the country, particularly in NSW and Victoria were the major detractor from performance with ongoing strength outside of these states sufficiently strong to maintain the national performance in positive territory (although by a slim margin).

BoJ Deputy Governor Masazumi Wakatabe said in a speech, the Japan economy has remained in a “severe state”. But the bank judged that “pick-up trend in the economy as a whole has been maintained, supported by positive developments in the corporate sector on the back of a firm recovery in overseas economies”.

“Positive developments are likely to spread from the corporate sector to the household sector as the impact of COVID-19 wanes gradually, mainly due to progress with vaccinations,” he added. “The economic recovery is expected to become clear.”

The key to realizing the positive outlook is “whether a virtuous cycle operates firmly”. That is, “whether an increase in domestic and overseas demand expands household income and corporate profits, and in turn leads to a further rise in spending”.

Japan PMI Manufacturing was finalized at 52.7 in August, just slightly down from July’s 53.0. Markit said output and new orders increased and slower rates. Export orders declined for the first time in seven months. Lead times lengthened to greatest extent in a decade amid ongoing disruption.

Usamah Bhatti, Economist at IHS Markit, said: “Latest PMI data pointed to a sustained expansion in the Japanese manufacturing sector midway through the third quarter…. A sharp rise COVID-19 cases in South East Asia was among the key factors listed by Japanese manufacturers for the easing in demand, both domestically and externally… Concurrently, severe supply chain disruption partly caused by pandemic restrictions and raw material shortages remained a dampener on production and orders.”

Wang Zhe, Senior Economist at Caixin Insight Group said: “The latest Covid-19 resurgence has posed a severe challenge to the economic normalization that began in the second quarter of last year… Official economic indicators for July were worse than the market expected, indicating mounting downward pressure on economic growth. Authorities need to take a holistic view and balance containing Covid-19, stabilizing the job market, and maintaining stability in supply and prices.”

Intraday bias in EUR/USD remains on the upside despite some loss of upside momentum. Rise from 1.1663 short term bottom is on track to 1.1907 resistance first. Decisive break there will indicate that fall from 1.2265, as well as the consolidation pattern from 1.2348, have completed. Near term outlook will be turned bullish for 1.2265/2348 resistance. On the downside, break of 1.1734 will turn bias back to the downside for 1.1602/63 support zone instead. 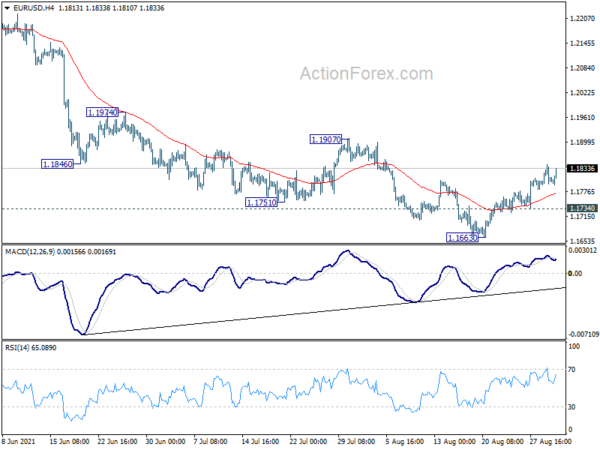 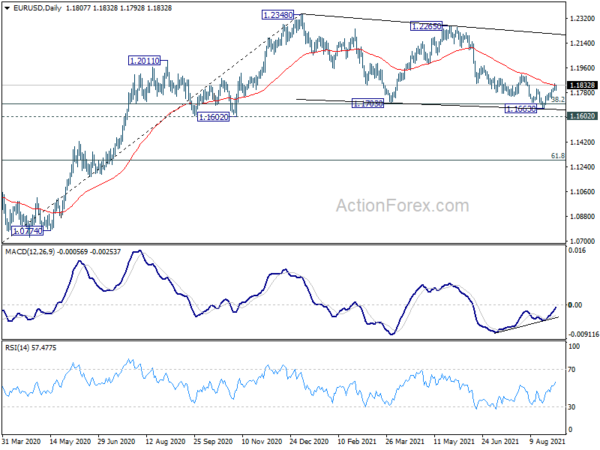