Dollar recovers mildly in quiet Asian session today, but there is no sign of a sustainable rebound yet. Most major pairs and crosses are staying inside Friday’s wide range. Strong rally is seen in Japanese Nikkei today, but there is little reaction in FX. Trading could remain subdued with US and Canada on holiday. Focuses will turn to three central bank meetings this week, including RBA, BoC and ECB.

Technically, our focuses will stay on 1.1907 key near term resistance in EUR/USD. Sustained break there will argue that whole correction from 1.2348 has completed and bring further rise back towards 1.2265/2348 resistance zone in the next few weeks. Similarly, firm break of 1832.47 resistance in Gold will also raise the chance that correction from 2074.84 has completed. Both developments, if happen, would seal the case for Dollar bearishness, at least for the near term. 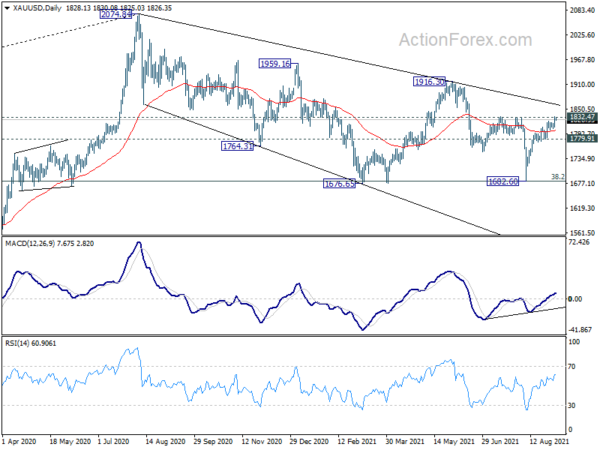 Japan Nikkei 225 extended rises sharply today, up more than 1.7% or 500 pts at the time of writing, overpowering other Asian markets. It’s indeed on track to 30k handle again in the next few day, if the momentum could sustain.

The upside acceleration started last week, after Prime Minister Yoshihide Suga surprisingly declared he would not run for leadership of the ruling Liberal Democratic Party in September 29.

Suga explained that he’d like to focus on coronavirus measures, as “doing both takes enormous energy”. But it’s believed that his light pandemic restrictions and the spread of the infections prompted much grieve among both consumers and business owners. Stepping down as party leader, and prime minister now would lower LDP’s chance of losing badly in the upcoming general election later in the year. The development gave extra support to the Japanese stock markets. 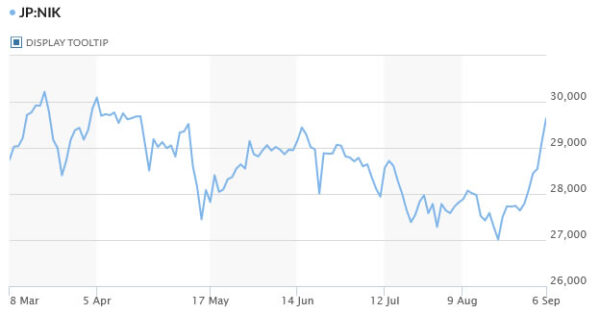 EU Gentiloni: A mistake for ECB to make conclusions too soon

EU Economy Commissioner Paolo Gentiloni urged ECB to monitor Eurozone inflation “very accurately”, without making conclusions too soon on scaling back monetary stimulus. He added, “I think it would be a big mistake, because the mainstream consensus is on the fact that this inflation is still a temporary phenomenon.”

He said Europe must avoid the “mistakes” of going “too soon back to normal”, as they did during the global financial crisis.

RBA and ECB to meet, to taper or not to taper

Three central banks will meet this week and RBA would be the most interesting one to watch. The central bank indicated in August that it would stick to its tapering plan to lower weekly asset purchases from AUD 5B to AUD 4B starting September. But pandemic situation worsened quickly since then, with the two biggest states now fighting with surging COVID cases, and business struggling with tough lockdowns. It’s now generally expected that RBA would decide to delay tapering, with some analysts calling for an increase. Yet, at this point, it’s still unsure which path RBA would take.

ECB would be another interesting one, as the central will need to decide what do to with PEPP asset purchases in Q4. Purchases pace had be significantly higher in Q2 and Q3. Given the solid improvement in the economy, as well ass fast vaccination, there is room for ECB to bring purchase pace back to the level during Q1. That would also set the stage for finally ending PEPP next March.

As for BoC, it would probably be a non-event, as there is no urgency for policymakers to make any changes ahead of federal elections on September 20. Also, BoC would likely wait for the new economic projections in October before adjusting anything including forwards guidance.

Intraday bias in USD/CAD stays mildly on the downside at this point, at fall from 1.2947 is in progress for 1.2421 support. Sustained break there will argue that whole rise from 1.2005 has completed at 1.2947 already. Near term outlook will be turned back for 1.2301 support first. On the upside, however, break of 1.2701 minor resistance will retain near term bullishness, and turn bias back to the upside for retesting 1.2947 high. 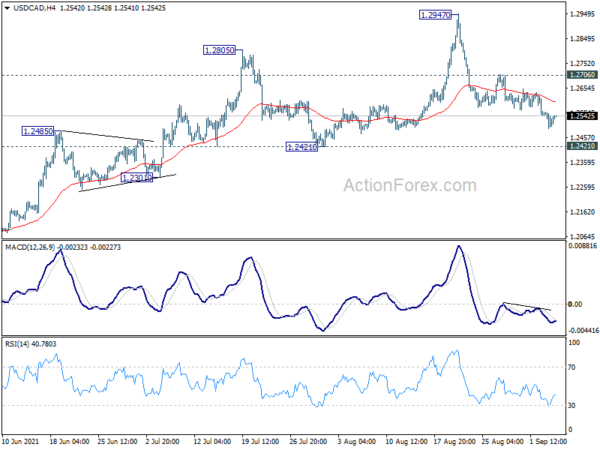 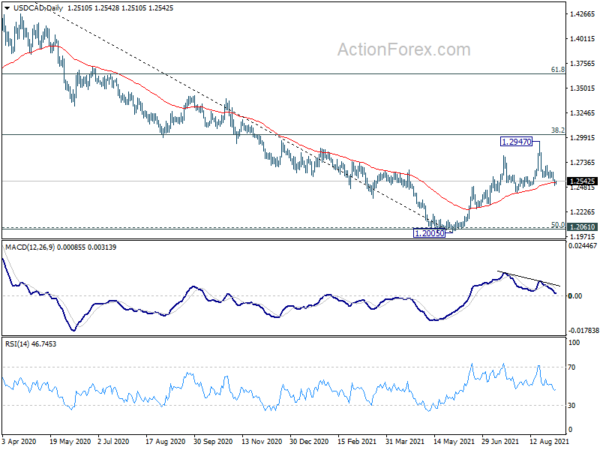