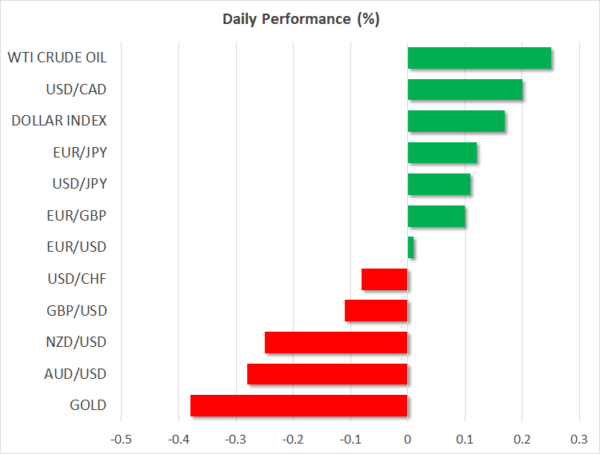 The Reserve Bank of Australia stuck to its exit strategy from QE on Tuesday, pressing ahead with its decision to reduce bond purchases by A$1 billion a week this month. However, the central bank postponed its next review of the weekly pace from November to February as it foresaw a slower recovery in the economy amid ongoing lockdowns across Australia.

The Delta variant may not have completely put a spanner in the works for policymakers’ taper plans but with infections yet to peak and several more weeks to go before the government reaches its 70%-80% vaccination target, the RBA is worried the economy will not bounce back as quickly as from previous lockdowns.

The extension of the tapering timeline is slightly negative for the Australian dollar in the short term and the currency hit a low of $0.7408 versus the greenback earlier today. However, some investors were disappointed that the RBA didn’t abandon its tapering intentions altogether so today’s decision wasn’t as dovish as it could have been and explains why the aussie initially went up after the announcement. The bigger risk for the aussie is if tapering is protracted over an even longer period of time, which could push back the timing of the first post-pandemic rate hike from 2024 to 2025.

One down, two to go

The Bank of Canada is not expected to announce any changes to its taper path when it concludes its policy meeting tomorrow although there’s a risk the Bank might sound more cautious given the increasing evidence of slowing growth in many parts of the world.

However, markets are mainly focused on the European Central Bank this week amid mounting speculation that it will be the next to join the taper bandwagon when it meets on Thursday. The ECB is unlikely to draw a detailed exit plan and will probably simply drop its pledge to buy bonds at a “significantly higher pace”. But investors will be looking for signs of any division within the Governing Council as well as for hints on when the big decision on how PEPP will wound down should be expected.

The euro was last quoted slightly down on the day at $1.1864, while the Canadian dollar was 0.2% weaker against its US counterpart.

Sterling also slipped for a second day as the dollar advanced broadly, with its index gaining 0.25%. The Fed could come back into the spotlight on Wednesday and Thursday when a number of regional presidents take to the podium. Their views post the soft August jobs report is bound to attract headlines but may not necessarily move the dollar much as it’s hard to see the consensus for November tapering shifting that easily.

Equity traders, meanwhile, are already betting on an unhurried pace of tapering by the Fed & Co and so the rally looks safe for now. Nasdaq futures were trading in record territory on Tuesday, though the gains were minor. European stocks were mostly in the red despite another strong session for Chinese and Japanese indices.

Better-than-expected trade figures out of China earlier today have brought some relief after a series of disappointing economic indicators lately. The strong exports showing in August should partly offset the hit to domestic consumption from the reimposition of some virus curbs. Nevertheless, there’s still plenty of caution in the air given the unpredictability of the constantly evolving virus situation.