Dollar ended as the strongest one last week, with some held from the late selloff in US stocks. Yen was the second strongest on risk aversion while Swiss Franc was not too far away. Commodity currencies, on the other hand, ended generally lower. Traders ignored the dovish tapering of RBA, and the cautiously optimistic BoC. Euro also got no support from ECB’s PEPP recalibration.

Risk sentiment would likely continue drive the forex markets in the near term at least. In particular, DOW’s selloff on Friday is seen as a technical warning that deeper correction is underway. We’ll keep an eye on the development there, and see if DOW would drag other major indexes further down. Or, strength in tech and others could help floor DOW’s fall, and thus, cap Dollar and Yen’s rebound.

While developments in S&P 500 and NASDAQ are still bullish despite Friday’s pull back, the extended decline in DOW is sending investors a warning. DOW has lost its near term bullishness again by breaking through 55 day EMA, as well as 34690.25 support. It’s still early to call 35631.19 a medium term top. If DOW could quickly climb back above 55 day EMA, recent up trend is still intact for another record high.

However, risk of a deeper correction is increasing, considering bearish divergence condition in daily MACD. Sustained trading below 55 day EMA this week would likely extend the decline to test on 33741.16 support. Firm break there will argue that it’s already in correction to whole up trend from 26143.77. In this case, next target would be 38.2% retracement of 26143.77 to 35631.19 at 32006.99, which is slightly below 55 week EMA. 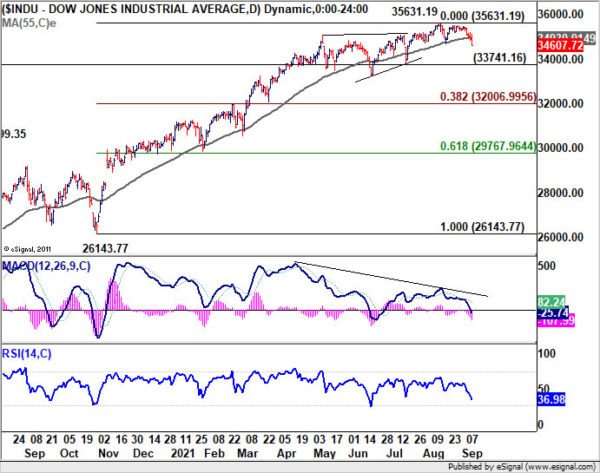 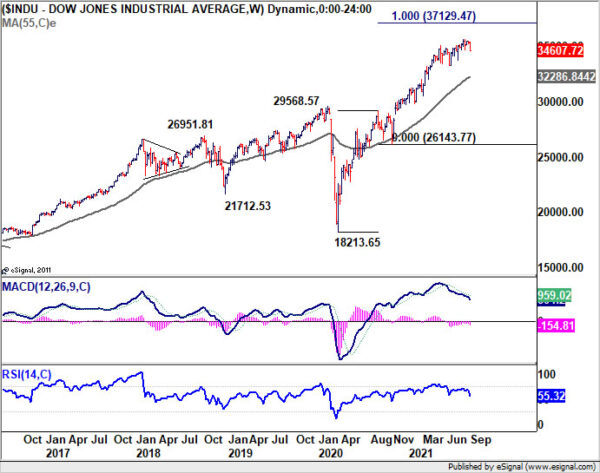 Dollar index recovered ahead of 91.78 support last week, maintaining some near term bullishness. There is prospect of extend the rise from 89.53 through 93.72, in particular if risk sentiments turn sour. But overall, we’re still slightly favoring that the pattern from 89.20 as a three wave consolidation pattern. Hence, 38.2% retracement of 102.99 to 89.20 at 94.46 is a major hurdle for DXY to overcome to turn medium term outlook bullish. 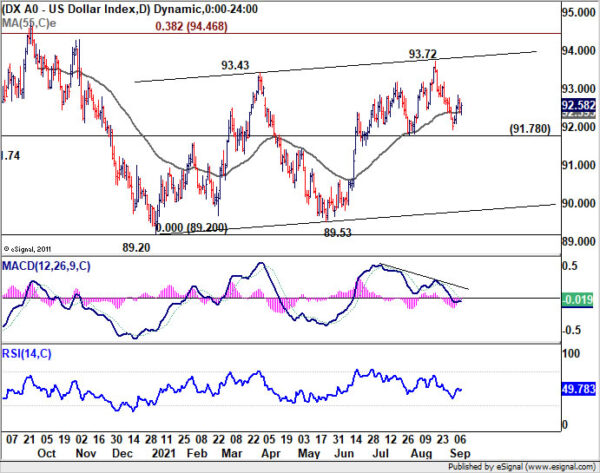 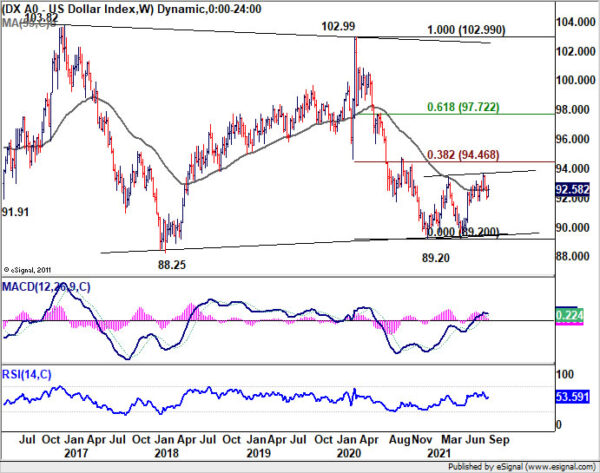 EUR/GBP down despite ECB’s PEPP recalibration

The key takeaways from ECB meeting last week was firstly, it will end front-loading of PEPP asset purchases in a flexible way. President Christine Lagarde stressed that it “isn’t tapering” and warned that the Eurozone is “not out of the woods”. Secondly, the council acknowledged a more persistent inflation pressure.

But Euro bulls were not satisfied with the outcome with the common currency sent down in European crosses. Development in EUR/GBP argues that rebound from 0.8448 has possibly completed at 0.8612 already, on bearish divergence condition in 4 hour MACD. It’s also back below the flat 55 day EMA. Deeper fall is in favor for the neat term to retest 0.8448 low at least. Also, with 0.8668 resistance intact, medium term decline could eventual extend through 0.8448 low. 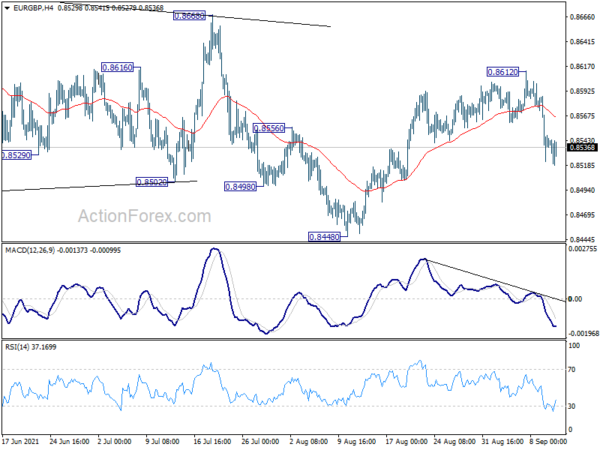 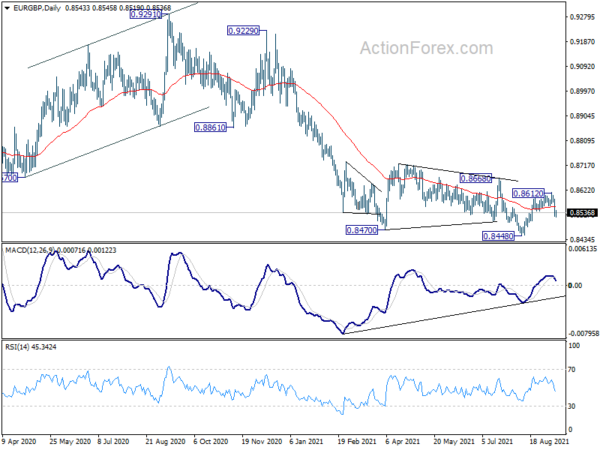 BoC’s message was actually cautiously optimistic after keeping policy unchanged. There are some speculations that BoC would resume tapering to CAD 1B per week at the October meeting. Governor Tiff Macklem also laid down the path to transit to the “reinvestment” phase, keeping the bond holdings roughly stable. August job data from Canada was also solid. But the Loonie followed general risk sentiments lower.

USD/CAD’s rebound argues that pull back from 1.2947 might have completed at 1.2492 already. That came after well defending 1.2421 structural support, with some help from 55 day EMA. The developments suggests that rise from 1.2005 is probably not over yet. Immediate focus will be back on 1.2760 temporary top this week. Break there will reaffirm near term bullishness and bring retest of 1.2947 first, and probably resume the rise from 1.2005 beyond. 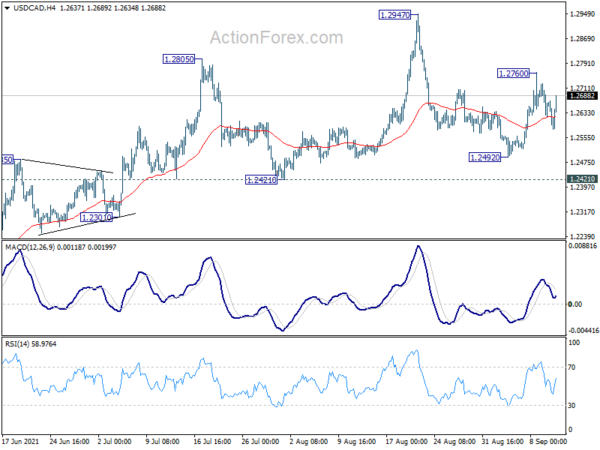 The RBA decision was a mixed bag, as it maintained the plan to taper asset purchases to AUD 4B per week. But the QE program was extended to “at least mid February 2022”. The central bank sounded optimistic that Delta outbreak will only delay but not derail recovery. Yet, he economy would only return to its “pre-Delta” path in H2 2022.

AUD/JPY also followed broad based risk selloff lower on Friday. The developments suggests that fall from 82.01 is still in progress. Near term focus is now on 38.2% retracement of 77.88 to 82.01 at 80.43. Break there will argue that rebound from 77.88 has completed indeed, after rejection by 55 day EMA. That could also set up the stage for resuming larger fall from 85.78 through 77.88 low. 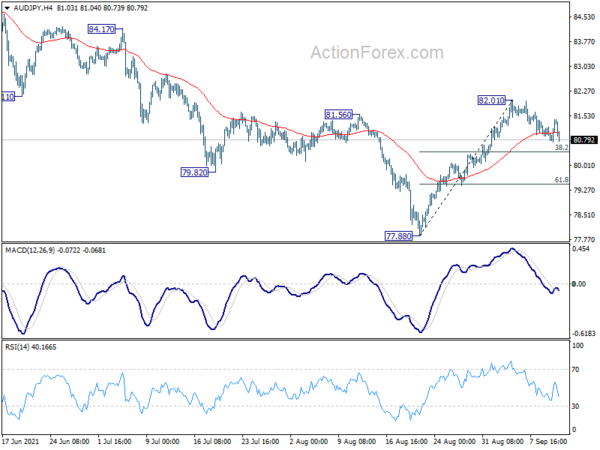 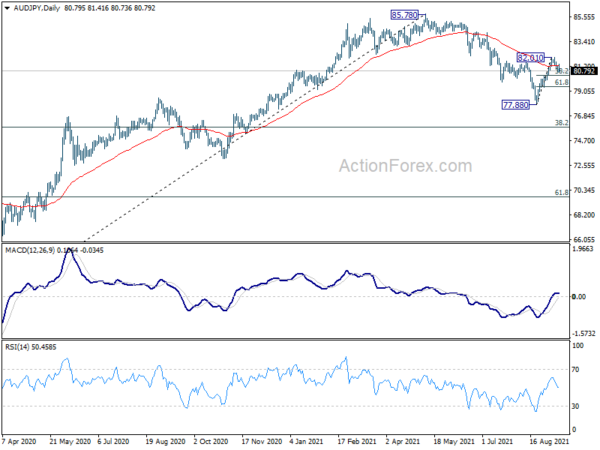 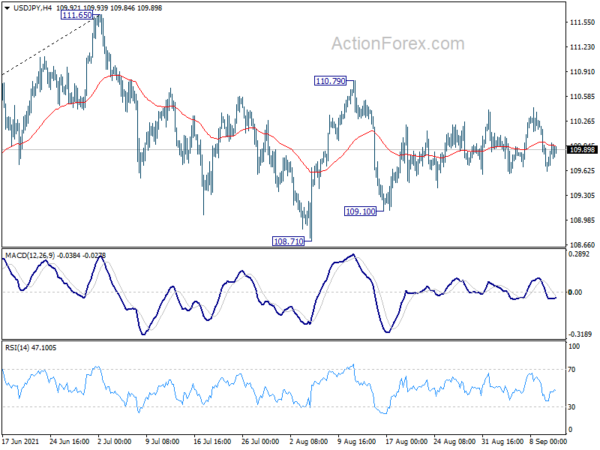 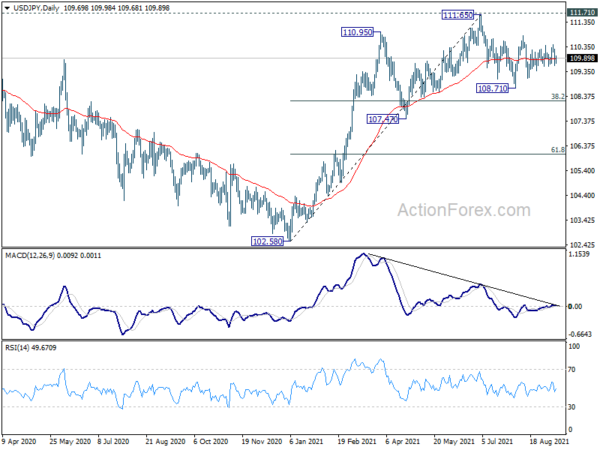 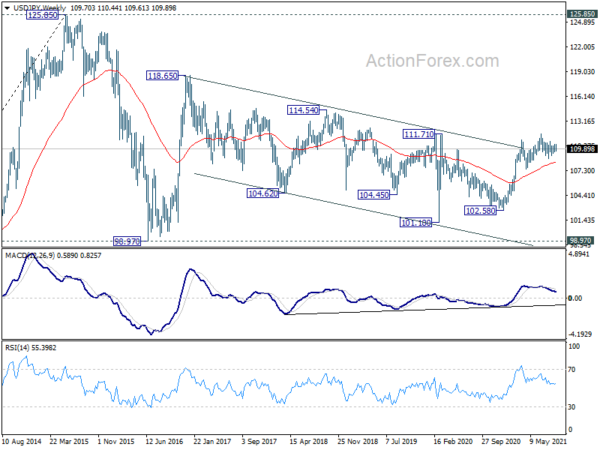 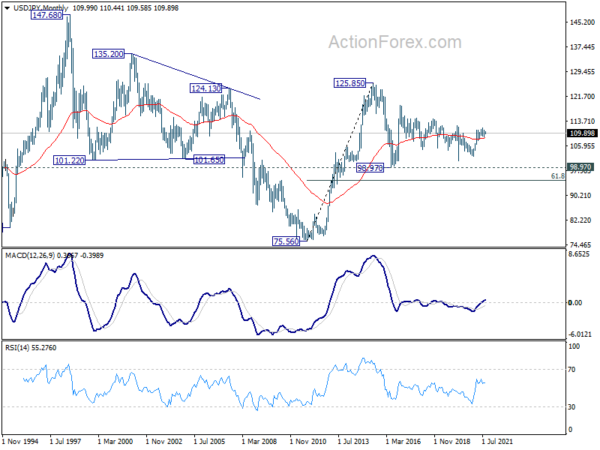