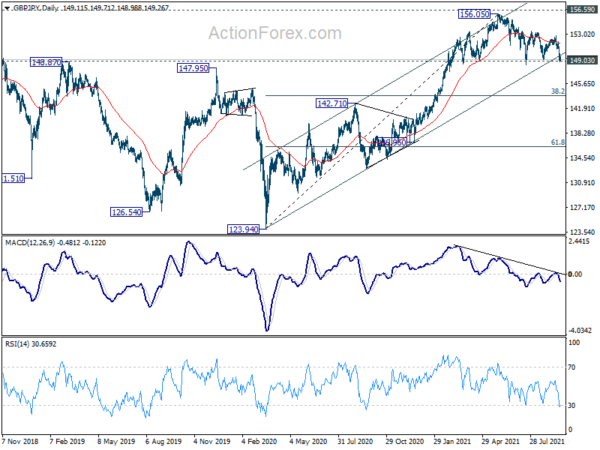 Trading in the forex markets is rather subdued today, as FOMC policy decision, dot plot and economic projections are awaited. The markets could come back to live if there are some hawkish twists in Fed’s projections. For now, Sterling is staying in selloff mode, even though momentum diminished a bit. Yen is also soft today, but it’s just digesting some of this week’s gains. On the other hand, Aussie is recovering mildly, together with Kiwi, as risk sentiment stabilizes.

Technically, EUR/GBP is now approaching 0.8126 resistance and break will resume the rise from 0.8448 to 0.8668 key structural resistance. GBP/JPY is pressing 149.03 key support zone and sustained break would resume the fall from 156.05 towards 143.78 fibonacci level. GBP/USD is also heading to 1.3601 support and break there would solidify downside momentum through 1.3570 support towards 1.3482 medium term support. The moves could come before BoE rate decision tomorrow, if FOMC triggers some volatility in the markets. 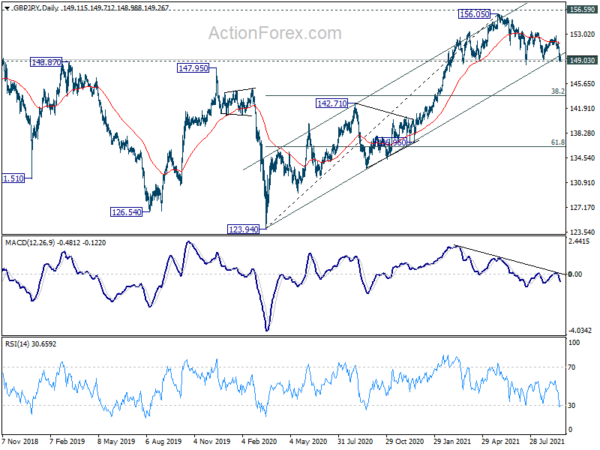 Fed not ready for tapering yet, some previews

No change in policy is expected from FOMC today and Fed is likely not ready to announce tapering yet. Chair Jerome Powell would just reiterate that “substantial further progress” has been “met for inflation”, and there has also been “clear progress toward maximum employment”. Also, it’s appropriate to start tapering “if the economy evolved broadly as anticipated

A major focus in the median dot plot, where two rate hikes were penciled in by 20223. For 2022, there were 7 out of 18 participants anticipating one or two hikes. The overall picture could tilt towards the hawkish side if just one or two members bring forward their rate forecasts to 2022. Meanwhile, the new staff economic projections will catch some attention too.

Here are some suggested readings on Fed:

ECB Muller: We should be able to end PEPP in March

ECB Governing Council member Madis Muller said, “given the recovery that we’re seeing in the economy, also the outlook for inflation and most importantly the extremely favorable financing conditions that we continue to have in the euro area, we should be able to end PEPP in March as it has been communicated and as it has been the original plan.” He added, “if you ask what is the most likely outcome then to me personally, this is the base case.”

Muller also argued that inflation could start stronger than ECB’s forecasts. “Looking at possible factors that could be pushing prices higher and those that could be pulling it lower, the factors pushing prices higher seem to be stronger at the moment,” he said. “It’s more likely that we will have inflation, for example, in 2023 higher than 1.5% rather than lower. The same probably applies for the 1.7% inflation forecast for 2022.”

However, “it would be a problem if there is a very sharp cliff effect at the end of the pandemic emergency purchase program,” he noted. “part of the discussion we will have on how to phase out PEPP and what it would mean for asset purchases going forward.” A potential increase in the APP program was being discussed. But, “of course the decision will depend on market conditions next spring and the economic outlook at that point.”

“Industrial production is currently shrinking as a result of supply bottlenecks for important intermediate goods. At the same time, service providers are recovering strongly from the coronavirus crisis.”

BoJ left monetary policy unchanged today. Under the yield curve control framework, short term policy interest rate is held at -0.10%. 10-year JGB yield target is kept at around 0%, without upper limit on bond purchases. The decision was made by 8-1 vote, with Goushi Kataoka dissenting as usual, pushing for strengthening easing. It also pledged to closely monitor the pandemic impact and “will not hesitate to take additional easing measures if necessary”.

Overall assessment on the economy was maintained as its has “picked up as a trend” but “remained in a severe situation” due to the pandemic home and abroad. But it noted that some exports and production have been “affected by supply-side constraints”. Weakness has been seen in some industries on business fixed investment. Employment and income “remained weak” while private consumption remained “stagnant”. Core CPI has been at around 0% and inflation expectations have been “more or less unchanged”.

In the post meeting press conference, BoJ Governor Haruhiko Kuroda said the recent slump in consumption was “in a way unexpected”. But he’s still optimistic on consumption outlook. He added that the decline was not because households lacked income, but more due to the pandemic keeping them from boosting spending. He added, “as the pandemic subsided, consumption is expected to strengthen.”

Kuroda also said he expected “external demand to remain solid” and there is no need to project a “clear slowdown” in US and China growth. He added that actual economic indicators, consumption and output were growing very steadily in the US. The woes of Evergrande is see as “purely” and individual company’s issue, and that of the real estate sector.

Australia leading index dropped to -0.5% in Aug, more weakness on the way

Australia Westpac-MI leading index dropped from 1.4% to -0.5% in August. Westpac said “the Leading Index has held up surprisingly well during this downturn but it seems likely that there is more weakness on the way.” For example, commodity prices and equities are likely to drag the index down further based on the developments in September.

Westpac doesn’t expect RBA to make any change to policy settings until February next year. It expects asset purchases to be fully wound back by May/August next year.

GBP/USD’s fall from 1.3912 is still in progress and intraday bias remains on the downside for 1.3570/3601 support zone. Larger decline from 1.4248 is likely resuming and break of 1.3570 will target 1.3482 key support level. Sustained break there will carry larger bearish implication and target 1.3163 fibonacci level. On the upside, above 1.3691 minor resistance will turn intraday bias back to the upside for 1.3912 resistance instead. 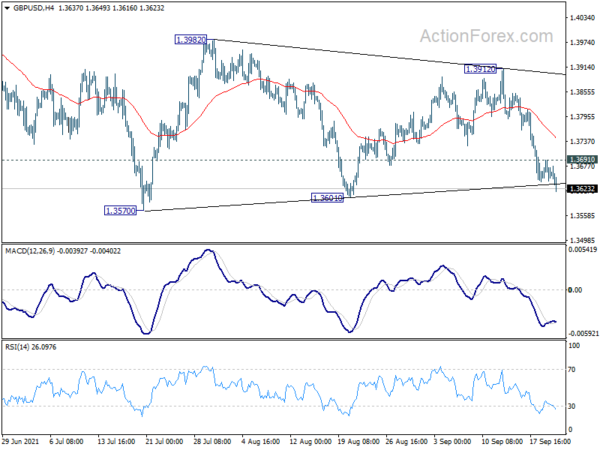