It has been a particularly busy week across Europe, with several of the G10 central banks making monetary policy announcements and contributing to varying degrees of market excitement. In this report we briefly recap these announcements and assess their FX implications.

Norway’s central bank became the first G10 central bank to raise rates with a 25 bps rate hike as the economy returns to a more normal growth path. While the central bank’s projections signaled further rate hikes, the increases penciled in for 2022 still look a touch light to us. We see upside risk to our current forecast of Norwegian krone appreciation.

The Bank of England held monetary policy steady and, despite cross-currents affecting the U.K. economy, said the case for modest tightening has potentially strengthened. With the announcement we have brought forward our expected timing for rate increases, and we now expect the Bank of England to initiate a rate hike cycle with an increase in May 2022, followed by November 2022. While the pound may be subject to some near-term uncertainties, we expect the U.K. currency to strengthen against the U.S dollar and the euro over the medium-term.

Sweden’s central bank and Switzerland’s central bank both held monetary policy steady, with no indication either central bank will move to a less accommodative monetary policy stance for the foreseeable future. Given the strength of Sweden’s economic rebound we still anticipate modest Swedish krona strength versus the euro. For Switzerland, moderate Swiss growth and inflation, combination with some improvement in global economic and market sentiment over time, should see the franc soften versus the euro.

The Norges Bank, Norway’s central bank, became the first developed economy central bank to raise interest rates during the current cycle, lifting its Deposit rate by 25 bps to 0.25%. The move was widely expected by market participants, and was justified by the central bank on the back of firming growth rather than inflation concerns per se. The Norges Bank said a “normalising economy now suggests that it is appropriate to begin a gradual normalisation of the policy rate”, and added that while underlying inflation is low increased activity and rising wages should push it towards 2%.

The Norges Bank’s updated projections anticipate further normalization of the economy, with the mainland GDP growth forecast at 3.9% for 2021 (versus 3.8% previously) and 4.5% for 2022 (4.1% previously). The interest rate path contained within those projections is also slightly higher than previously. In its announcement, the Norges Bank explicitly stated the policy rate would most likely be raised further in December, while the revised rate path sees the policy rate rising to 1.12% by Q4-2022. We are in agreement on a December 2021 rate increase. However, given we also expect a solid ongoing economic rebound, the rate path for next year still appears to be a touch light. We expect at least a further 75 bps of rate increase, and perhaps as much as 100 bps of rate increase, in 2022. Against this growth and monetary policy backdrop we believe the risks around our Norwegian krone forecast are tilted towards a faster pace of appreciation relative to our base case, which anticipated a EUR/NOK exchange rate of NOK9.95 by the end of next year. 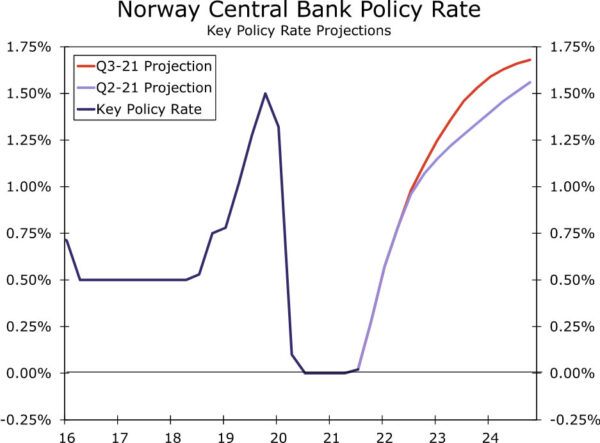 The Bank of England (BoE) held monetary steady at its September meeting, although the announcement was arguably marginally hawkish in tone. Policymakers voted unanimously to hold its policy rate steady at 0.10%, while there was a 7-2 vote to continue with the government bond purchase programme, with the two dissenters voting for an early end to asset purchases. That was a slight change from previous meetings which has seen just one dissent in favor of an early end to bond purchases.

The Bank of England’s statement highlighted cross currents affecting the U.K. economy contributing to softer growth (for now) and higher inflation. The central bank said the forecast for the level of real GDP in Q3-2021 has been revised down around 1% since its August projections, noting some supply disruptions. Moreover, while the BoE noted softness in reported retail sales it said other indicators of spending have remained stronger. On inflation, the central bank cited increased natural gas prices as an upside risk and said cost pressures are still elevated, even if they are likely to be transitory.

Importantly, with respect to overall monetary policy the Bank of England said:

“At its previous meeting, the Committee judged that, should the economy evolve broadly in line with the central projections in the August Monetary Policy Report, some modest tightening of monetary policy over the forecast period was likely to be necessary to be consistent with meeting the inflation target sustainably in the medium term. Some developments during the intervening period appear to have strengthened that case, although considerable uncertainties remain.”

From our perspective, while the uptick of inflation will very likely be transitory, it is somewhat challenging to discern how much of the current spike in inflation is temporary and how much is more persistent. In August for example, we note the headline, core and services CPI all showed an increase of 3.0% year-over-year or greater. By 2022 we expect the U.K. economy will have returned to a steadier growth path and CPI will still be above target (even if it is slowing). As a result, we still expect the Bank of England to begin raising rates around the middle of next year. In fact, with today’s announcement we have brought forward our expected timing of Bank of England rate hikes by a quarter, and now anticipate a 15 bps policy rate hike in May 2022 (to 0.25%) and a 25 bps rate hike in November (to 0.50%). While the pound could be subject to some near-term uncertainty, we still expect the U.K. currency to strengthen against both the U.S. dollar and the euro over the medium term. Our current year-end 2022 targets are $1.4300 for the GBP/USD exchange rate a EUR/GBP exchange rate of 0.8325. 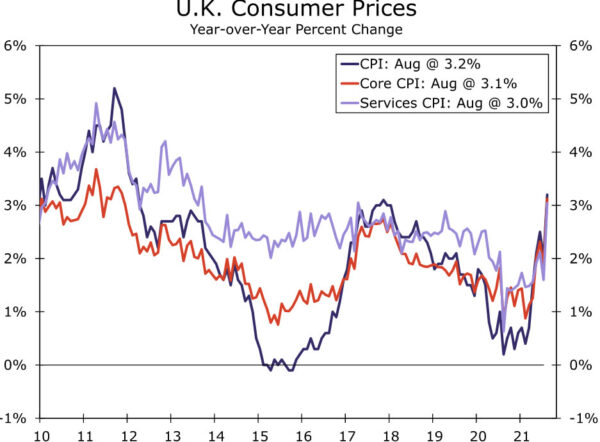 The monetary policy announcement from the RIksbank, Sweden’s central bank, was perhaps notable for a lack central bank action or intent. The Riksbank appears largely unmoved by Sweden’s firming economic recovery. Not only did the Riksbank keep its repo rate at 0.00%, it projected the policy rate would remain at that level over the entire forecast horizon out until Q3-2024. Moreover, the Riksbank held out some possibility that further monetary easing could still be forthcoming if inflation prospects weaken, whether that is through repo rate cuts or some other form.

Developments regarding the Riksbank’s quantitative easing program are more cut-and-dried. The central bank said it would complete its bond purchases by the end of 2021, and keep bond holdings steady through 2022, in line with its previous announcements. Finally, in the one concrete measure the Riksbank took, it closed the emergency lending facilities that were set up at the outset of the COVID crisis.

The benign announcement from Sweden’s central bank comes even as it raised its 2021 GDP growth forecast to 4.7% (from 4.2% previously), while its GDP forecasts of 3.6% for 2022 and 2.0% for 2023 are little changed from its prior outlook. For CPIF inflation, the Riksbank forecast 2.3% inflation in 2021, easing back to 2.1% in 2022 and 1.8% in 2023. The central bank said its expects a near-term, electricity-related increase in inflation, but does not expect a lasting firming of inflation just yet.

Sweden’s economic upswing has certainly been impressive so far in 2021. Not only did Q2 GDP growth reach 9.7% year-over-over, elevated PMI indices and confidence surveys suggest some of that momentum has carried into the second half of this year. The rebound also appears to be broad-based—for example, July private sector production rose 10.5% year-over-year as services production rose 10.0% and industry production rose 13.3%. The strength of Sweden’s recovery means we still expect very modest gains in the krona versus the euro over time, especially with the European Central bank, if anything, shifting even more gradually from its accommodative monetary policy stance. For year-end 2022, we target the EUR/SEK exchange rate at SEK10.05. 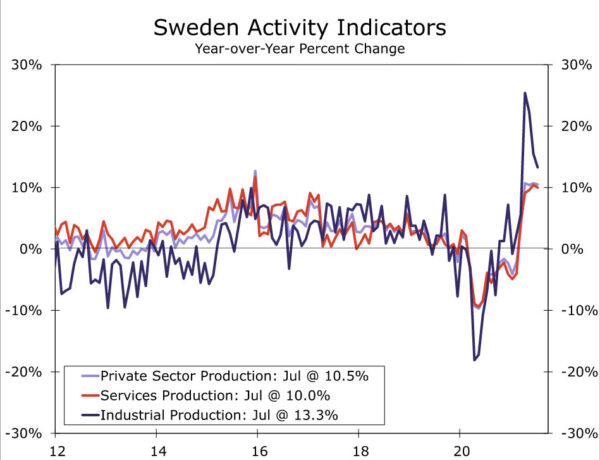 Switzerland’s monetary policy announcement had a very familiar feel to it as the Swiss National Bank (SNB) maintained its accommodative monetary policy stance and gave no hint of any change in policy for the foreseeable future. The SNB held its policy rate at -0.75%, and said the Swiss franc remains highly valued. The central bank said it “remains willing to intervene in the foreign exchange market as necessary, in order to counter upward pressure on the Swiss franc.”

Regarding its economic projections, the SNB expects GDP growth 3% for 2021, a bit less than in June. On the price front, inflation is expected to be slightly higher in the near-term on elevated oil prices and supply disruptions, but virtually unchanged of the medium-term, such that CPI inflation is still below 1% by the end of its forecast horizon in 2024.

To be sure, both Swiss growth and inflation have shown firmer trends in 2021, with both headline and core inflation rising at their fastest pace in more than two years. However, as this week’s announcement makes clear, the uptick in inflation in particular is still modest. Along with the Bank of Japan, the Swiss National Bank appears to be the other central bank that is most likely to maintain expansionary monetary policy for an indefinite period. With many other G10 central banks moving towards less accommodative policy (at varying speeds), an outlook for rising global yields, and should COVID concerns recede as 2022 progress, that should translate to an underwhelming performance from the Swiss currency. We expect the franc to soften versus the euro over time, and we target a EUR/CHF exchange rate of CHF1.0950 by the end of 2022. 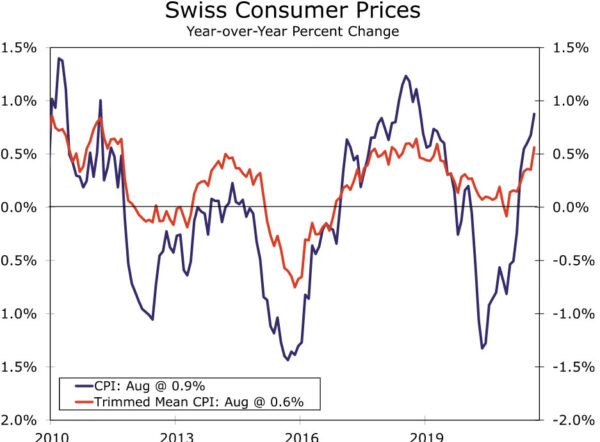