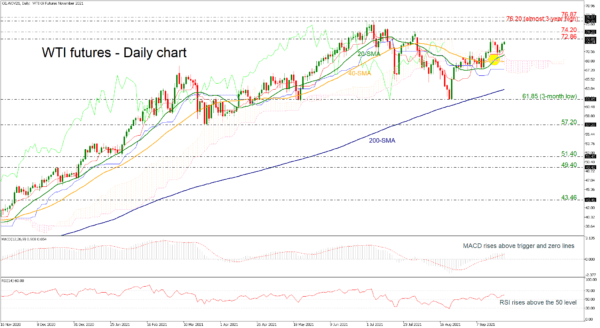 WTI futures are climbing above the Ichimoku cloud and the bullish crossover within the 20- and 40-day simple moving averages (SMAs), challenging again the previous days’ high of 72.86.
According to the technical indicators, the MACD is overcoming its trigger line and is gaining momentum in the positive region, while the RSI indicator is ticking higher above the neutral threshold of 50. Both are confirming the recent bullish bias in the near term. Also, the market is trading above the Ichimoku cloud and the red Tenkan-sen line is following the price action, holding above the blue Kijun-sen, which is a positive sign for the outlook.

In case the price jumps beyond the 72.86 resistance, it could rest near the 74.20 barrier ahead of the almost three-year high of 76.20, registered on July 1. Slightly higher, the 76.87 hurdle could attract traders’ attention as the commodity reached that level back in September 2018.

In the negative scenario, a successful drop below the short-term SMAs and the Ichimoku cloud could open the way for the 200-day SMA at 63.68. Penetrating this level, a marginal negative correction may be on cards, hitting the three-month low of 61.85 before meeting the 57.20 support.

Summarizing, oil prices are moving higher after the rebound off 61.85, and only a decisive close below the 200-day SMA and 61.85 may shift the bias to negative. 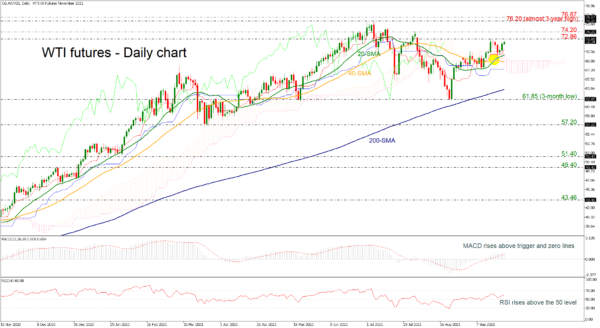