Gold slid aggressively below the ascending trendline in the four-hour chart on Wednesday, signalling more negative sessions ahead. The 50% Fibonacci retracement of the 1,833 – 1,722 downleg at 1, 777 is also positioned in the same region, making any violation important to watch.

With the RSI extending its downtrend towards its 30 oversold level, and the MACD hovering below its signal and zero lines, the odds look to be against the market. Encouragingly, though, the Stochastics suggest the sell-off could only be temporary as the indicator is already flirting with oversold levels.

A close below the 200-period simple moving average (SMA) could immediately stall near the 38.2% Fibonacci of 1,764. The way lower, however, could be even trickier for the bears, as the longer-term ascending trendline drawn from the August lows could put the brakes on the sell-off as it strictly did at the end of September.

On the upside, the 50% Fibonacci of 1,778 and the broken trendline may shift into a resistance role if the bulls resurface. A successful violation at this point could meet the 20-period SMA at 1,787, while higher, the rally may advance towards the 61.8% Fibonacci of 1,798. If more upside movements unfold, the spotlight would turn to the 78.6% Fibonacci of 1,809.

To sum up, gold is at a disadvantageous position in the short-term picture, with support expected to next develop around 1,764. 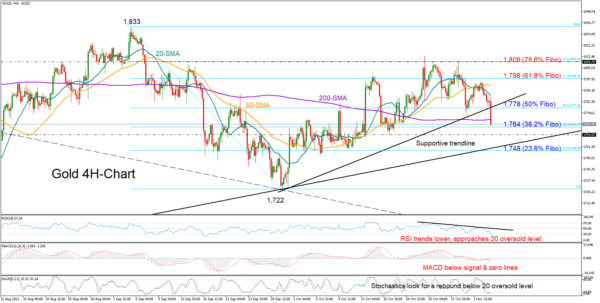