USDCHF has been deteriorating for a month after the pair hit a near 6-month peak just shy of the long-term trendline pulled from the April 2019 high of 1.0235. The price is currently steady at the mid-Bollinger band at 0.9130 and is adhering to a one-month decline. The bearish 50- and 100-period simple moving averages (SMAs) are nourishing the descent, while the gradual falling of the 200-period SMA is signalling that the pair is cementing its negative bearing.

The short-term oscillators are slightly skewed to the downside. The MACD, some distance below the zero mark, is showing that positive momentum remains feeble, while the dip in the RSI, just underneath the 50 threshold is suggesting negative momentum could return sooner rather than later. The negatively charged stochastic oscillator is also endorsing bearish price action in the pair.

If the descent remains on course, prompt downside friction could stem from the 0.9105 low ahead of the support barrier of 0.9075-0.9088, which includes a near three-month low and the lower Bollinger band. If sellers drive the price beneath this hardened obstacle, the price may snag at the August 5 border of 0.9050. Sinking further, the bears could then target the 0.9018 trough and the adjacent support boundary of 0.9000-0.9009.

To the upside, a price push over the mid-Bollinger band at 0.9130 could meet initial resistance from the area of 0.9145-0.9155, the latter being the 50-period SMA. Thrusting higher, the bulls could test the 0.9170 and 0.9176 nearby highs, where the upper Bollinger band also currently lies. Should buying interest intensify, the price may challenge the minor restrictive trendline, drawn from the 0.9368 peak, and the 0.9192-0.9203 resistance section. Successfully conquering these overlapping borders, buyers could propel the price towards the 0.9226 high and the 200-period SMA at 0.9234.

Summarizing, USDCHF is sustaining a bearish trajectory below the SMAs and the 0.9176 high. A break below the 0.9075-0.9088 barrier could reinforce negative pressures, while a price jump above the 0.9226 high is required to refuel positive belief. 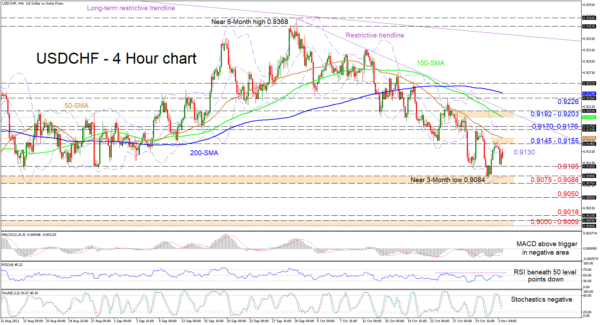