NZDUSD May Find its Feet ahead of 50.0% Fibonacci

NZDUSD has surrendered just about 50.0% of its latest rally from 0.6910 until 0.7217 but the negative drive seems to have somewhat softened. The falling 50-period simple moving average (SMA) appears to be heading for a bearish crossover of the 100-period SMA and this could signal the negative trend is gaining strength.

However, the short-term oscillators are indicating a slight pick up in positive momentum. The MACD, in the negative region, is flattening beneath its red trigger line. On the contrary, the RSI is improving from the 30 oversold level, while the stochastic oscillator has turned bullish. They are both reflecting that selling interest is fading.

Gaining traction off the lower Bollinger band within the support section of 0.7064-0.7075, buyers may meet initial resistance at the 0.7100 handle, that being the 38.2% Fibonacci retracement of the up leg from 0.6910 until 0.7217 and the mid-Bollinger band at 0.7115. Overstepping the mid-Bollinger band, upside impetus could struggle at the zone between the 100- and 50-period SMAs at 0.7138 and 0.7148 respectively. However, should buying interest conquer this tough border, the bulls will then need to push past the upper Bollinger band at 0.7160 to challenge the 0.7178 high.

Summarizing, NZDUSD is exhibiting a bearish tone despite buyers recently gaining some strength. A price dive below the 200-period SMA at 0.7048 could reinforce negative pressures, while a climb above 0.7178 high is necessary to refuel buyers’ confidence. 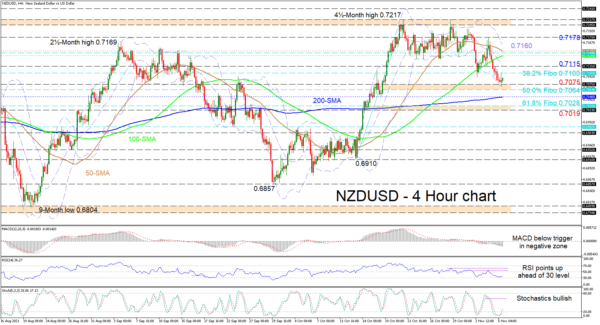