EURJPY Selloff Could Have More Legs; Neutral in Medium-Term

EURJPY has erased half of October’s rally, which peaked at a four-month high of 133.47, with the 50- and 200-day simple moving averages (SMAs) recently coming into the rescue to impede the sell-off around 130.50.

The technical status, however, is still bearish. The RSI has stretched its downtrend into bearish territory, while the MACD continues to lose ground below its red signal line as the Stochastics head back into the oversold zone.

Meanwhile in the medium-term picture, the pair is still in a trendless market, moving sideways between the 134.11 and 127.92 boundaries. Any violation at these limits would alter the neutral outlook accordingly.

In summary, despite the recent selloff, EURJPY bears seem to have more fuel in the tank. A break below 130.50 could confirm additional negative extensions, though in the medium-term picture a freefall below 127.92 would be needed to switch the neutral trajectory to bearish. 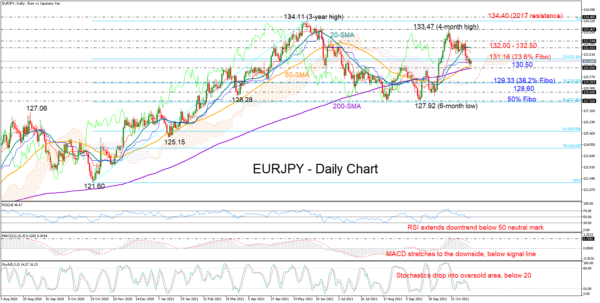