A busier calendar of economic data will be headlined by October inflation numbers. We expect the inflation rate ticked up to 4.5% reflecting higher food, gasoline, and home purchase/ownership costs. Annual CPI growth is still being biased higher by weak year-ago comparables when the economic impact of the pandemic was more severe. Price growth has been broadening versus pre-pandemic (2019) levels as well, and that is expected to continue in October. Retail food prices, particularly for meat, have increased substantially in recent months following an earlier jump in agricultural commodity prices. Prices at the pump rose 5.1% from September to October, building on already elevated levels. Shelter costs, particularly owner’s replacement costs and other owned accommodation costs (realtor/broker fees) have been key drivers of price growth above pre-pandemic trends and that likely continued in October given a reacceleration in home resale prices. Auto related components including new vehicle and car rental and leasing costs are expected to show another increase as supply continues to be curtailed by the continuation of the global semi-conductor shortage.

The impact of the chip shortage will also be evident in next week’s retail and manufacturing reports. Advance estimates have already suggested weaker sales in October, with retail and manufacturing falling 1.9% and 3.2% month over month, the latter mostly reflecting weaker transport equipment sales. Spending on services however has continued to improve through September into October, particularly for travel related items as indicated by RBC’s consumer spending tracker. That said, spending on travel continues to run well-below pre-pandemic levels, suggesting more room for recovery in coming months with border restrictions further eased for travel between Canada and the US. 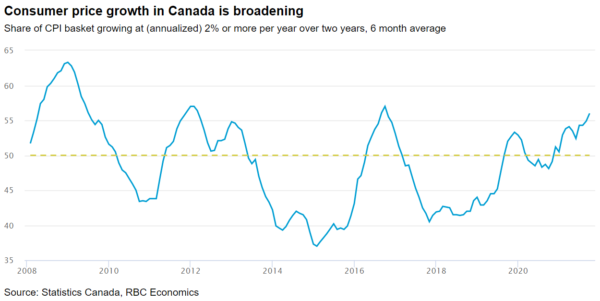 The official preliminary estimate of Canadian September retail sales showed a 1.9% decline. We expect little change to the preliminary estimate although spending on some services (particularly travel-related) have continued to recover according to our own consumer tracker.

We see little reason to deviate from StatCan’s preliminary estimates that manufacturing sales fell 3.2% in September, with most of the weakness coming from transportation-related items. Manufacturing hours worked were little changed in September, but motor vehicle exports dropped 18% with the global semiconductor shortage disrupting production. Wholesale sales, though, ticked up by about a percentage point in the official Statcan early estimate.

Housing starts in Canada are expected to tick up to an annualized 277k in October, after stronger permit issuance reported for the prior months. 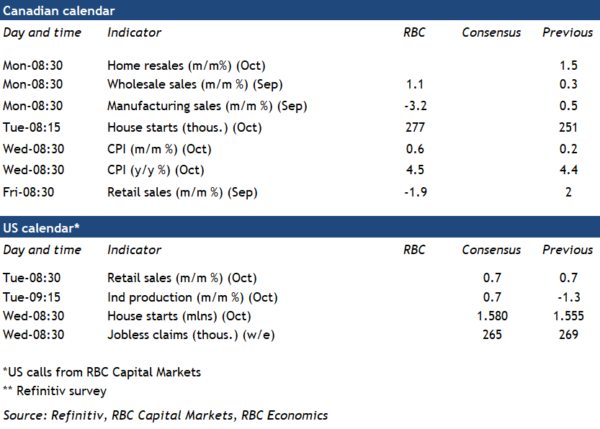