In recent days, researchers and scientists identified a new variant of the COVID virus, now officially named the Omicron variant. First identified in South Africa, the Omicron variant has been detected in 15 countries across Europe, North America, Asia and Africa. Even in Australia, where border control measures have been relatively strict, health officials have found multiple Omicron cases. According to health professionals in the United States, it is possible the Omicron variant has already spread into the U.S. as well, but has just yet to be officially detected. As of now, details regarding the transmissibility and severity of Omicron are scarce; however, the World Health Organization (WHO) has already declared the new strain a “variant of concern.” In its official statement, the WHO mentioned that preliminary evidence could suggest an increased risk of reinfection relative to other variants of concern. While additional testing and sequencing still needs to be done to make a determination on how transmissible Omicron is, the WHO is asking countries around the world to enhance surveillance of the new strain and coordinate with the international community to improve understanding of the possible impacts from the Omicron variant.

In response to the WHO labeling Omicron a variant of concern, governments around the world have taken action. U.S. President Joe Biden has restricted travel from several Southern African nations, while many other countries have taken a similar approach. The Japanese government has opted for more stringent measures and announced Japan’s borders are now closed to all foreign non-resident travelers. In the UK, booster shots have been made available to a greater portion of the population and British officials are also contemplating imposing new restrictions. And in Israel, Israeli officials have delayed the re-opening of the travel corridor with other Middle East countries in an effort to contain the spread of a locally found case and prevent new infections from entering. As of now, we believe these new restrictions are unlikely to have a significant impact on the global economy and, in our view, the global economic recovery remains intact. However, similar to when the Delta variant was first identified, we believe laying out scenarios for how the Omicron variant could impact the global economy and financial markets is a valuable exercise.

Base Case Scenario: Contained and Eliminated

As of now, our core scenario for the global economy is centered around the assumption that COVID cases continue to rise as a result of the Omicron variant, winter months in the Northern Hemisphere, as well as elevated holiday season travel. However, we also assume that widespread lockdowns like those experienced in early 2020 will not be repeated. We assume travel limitations regarding select Southern African nations and idiosyncratic lockdowns similar to Japan are the extent of the restrictions and consumer activity is only mildly disrupted. We anticipate mobility remaining above pre-pandemic levels and that households will continue to deploy excess savings on household balance sheets built up over the last 18 months. In our view, the base case scenario has a 70%-80% chance of materializing. We assign such a high probability purely due to the fact that limited data on the Omicron variant exists at this time.

Under these assumptions, we forecast the global economy to hold steady and for the global economic recovery to continue uninterrupted. In that context, we currently forecast the global economy to expand at an above trend growth rate of 4.2% in 2022. We expect global growth to be led by the emerging markets as these economies should start to gather recovery momentum over the course of next year. As far as how currency markets could perform, through the end of this year, we expect the U.S. dollar to broadly strengthen around 1% as the Fed’s path toward tighter monetary policy is unlikely to be disrupted by the emergence of the new COVID variant. Foreign currencies are likely to weaken, with emerging market currencies likely to underperform given their elevated sensitivity to Fed monetary tightening. Over the course of 2022, we expect similar dynamics to continue with the greenback strengthening around 4.5% and foreign currencies depreciating. Again, we expect emerging market currencies to underperform even though local developing economies could start to show more pronounced signs of economic recovery in 2022. In that context, we expect emerging market currencies to weaken around 5% next year in our base case scenario for the global economy.

While we assign a high probability to our base case scenario, we believe a downside scenario for the global economy clearly exists. In fact, before Omicron, we felt as if risks around our 2022 global GDP forecast were tilted toward a slower pace of expansion; however, a new strain of COVID and subsequent uncertainty raises the likelihood of slower global growth somewhat further. We define our downside scenario as the Omicron variant being easily transmissible and resulting in more severe patient symptoms. As a result, governments around the world put more stringent restrictions and lockdown measures back into place. Global mobility falls below pre-pandemic levels and consumer spending patterns are significantly altered as “COVID fears” rise. In our view, the probability of this scenario unfolding is quite low at this time. To that point, we place a 10%-20% likelihood of this scenario materializing; however, as more data and information around the Omicron variant is released, the probability of this scenario materializing could change rather quickly.

As restrictions rise, consumption patterns change, and investors become more risk-averse, the global economy would likely slow. In our view, this scenario would have a more pronounced impact on the global economy and could shave as much as 0.75% off global growth in 2022. Should this scenario unfold, the global recovery would be interrupted and the global economy would decelerate to a trend-like 3.5% growth rate next year. We also feel as if the economic deceleration would be broad-based, and impact both G10 and emerging market economies. Our outlook on currency markets under this scenario would materially change as well. In the short-term, the U.S. dollar could see more upside than we currently expect and the U.S. dollar index could move higher by around 1.5% over the next month (about 0.5% more than our base case scenario). On the other hand, G10 currencies could weaken between 1%-1.5% and the more risk-sensitive emerging market currencies would come under the most pressure. Over the course of 2022, we believe U.S. dollar strength could persist even longer than we expect. Safe haven capital flows should support the U.S. dollar against foreign currencies in this scenario, and we would look for a 5.75%-6% rise in the dollar index next year (about 1.5% more than our base case). Developed and emerging market currencies would come under pressure; however, emerging currencies could see a sharp 6.5% drop next year as investors turn risk averse and avoid exposure to developing economy financial markets.

As we note above, we feel as if risks around global economic growth are tilted to the downside (i.e. slower global growth than we currently expect); however, a scenario still exists where the prospects for global growth could improve. In order for the global economy to outperform, risks surrounding the Omicron variant would need to fade very quickly. Research would have to prove Omicron is not a more transmissible strain of COVID and that vaccines are effective in preventing infections and hospitalizations. In this scenario, consumers would also need to deploy excess savings quicker than we expect and holiday-related spending would need to act as a tailwind for economic growth. That spending momentum would need to carry into next year and consumers would have to be a more significant engine of economic growth in 2022. We also believe that investors would have to deploy more capital into financial markets, particularly risk-sensitive asset classes, while multi-national corporations would need to feel more comfortable making longer-term investment decisions as uncertainty recedes. This scenario would likely yield the most benefit for the global economy and we could enter into a period of synchronized global growth; however, the likelihood of this scenario is rather slim, and we assign only a 5% probability to this situation materializing.

In the unlikely event this scenario does unfold, the global economy could gather momentum and experience a well above trend growth rate of 4.5% in 2022. Against a backdrop where the global economy is growing in unison, financial market volatility would drop and risk assets could be more supported. In that sense, we would expect the momentum behind the U.S. dollar to slow over the next month and for G10 currencies to remain somewhat unchanged in the short-term. In this scenario, the Federal Reserve could pick up the pace of monetary tightening, so we still believe emerging market currencies could underperform; however, the selloff would be much less intense. We would also turn less optimistic on the longer-term prospects for the U.S. dollar and would expect a more modest rise in the greenback of around 3% over the course of 2022 (about 1.5% less than our base case). In addition, foreign currencies would experience gradual weakness. We would look for G10 currencies to weaken around 2.5% and for developing currencies to fall closer to 3%-3.5%.

Conditions Could Change Rapidly. We’re Prepared to Update as Necessary

The scenarios above represent our assumptions and forecasts given the information we currently have on the Omicron variant and how governments have responded until now. Of course, health conditions and COVID-related developments have the ability to change quickly as we saw over the course of 2020, and to a lesser extent 2021. As conditions evolve and our views on the world change, we will provide periodic updates, in addition to our monthly economic updates, on how our base case and risk scenarios are changing. Below is a summary of our economic and currency forecasts in our base case and risk scenarios. 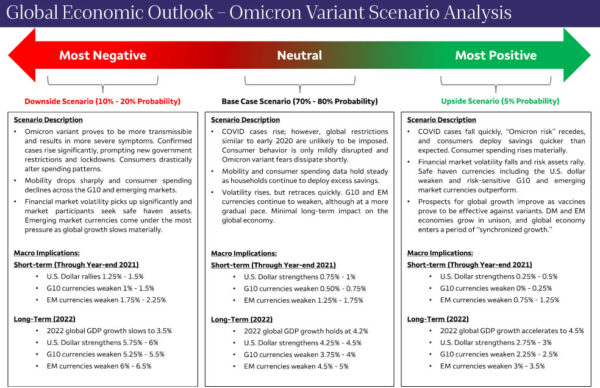