GBPJPY rebounded off the 149.65 support level and tested the 20-period simple moving average (SMA) around the 151.00 psychological mark. The MACD oscillator is advancing above its trigger line in the negative region, while the RSI is flattening in the bearish territory, indicating a somewhat weak momentum in the price.

If the pair successfully surpasses the 20-period SMA, immediate resistance could come at 151.90 and then at 152.34, which overlaps with the 40-period SMA. More gains could take the bulls until the 156.60 barrier before challenging the 200-period SMA at 154.50.

Alternatively, a drop lower again could endorse the medium-term bearish structure, allow the price to flirt with the 149.65 support and the 149.20-148.93 region. Underneath this line, traders could reach the low from July 2021 at 148.45.

All in all, GBPJPY has been in a descending movement over the last month and only a significant rally above the 200-period SMA may change this view. 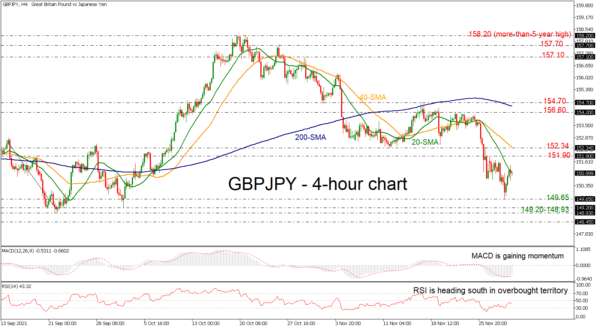