NZDUSD is edging sideways across the 0.6800 mark as clear directional impetus has softened after the pair stretched to a near 13-month low of 0.6771. The diving 50- and 100-period simple moving averages (SMAs) are backing the bearish trajectory of the pair.

The squeeze in the Bollinger bands is hinting of an upcoming surge in volatility, while the short-term oscillators are somewhat suggesting sellers may regain the upper hand. The MACD has marginally returned beneath its red trigger line in the negative region, while the RSI is sliding in the bearish zone. Furthermore, the fresh dip in the stochastic %K line, just overhead of the 20 level, is suggesting negative forces may be strengthening.

To the downside, an immediate buffer zone that encompasses the lower Bollinger band, from the 0.6800 handle until the near 13-month low of 0.6771 could hinder the price from tumbling further. Additional defences could stem from the adjacent 0.6742-0.6759 support border, which could add credence to a forming barricade, preventing the descent from gaining pace. However, if sellers drive the pair underneath these obstacles, the price may then aim for the 0.6708 and 0.6678 barriers from the early part of November 2020 before testing the key 0.6612 trough.

Summarizing, NZDUSD is exhibiting a tendency to navigate lower in the near-term picture. That said, for additional negative moves to come into fruition, the price would need to manoeuvre below the 0.6742-0.6759 boundary. Alternatively, for buyers to regain some confidence, the pair would need to rise above the 0.7013 high. 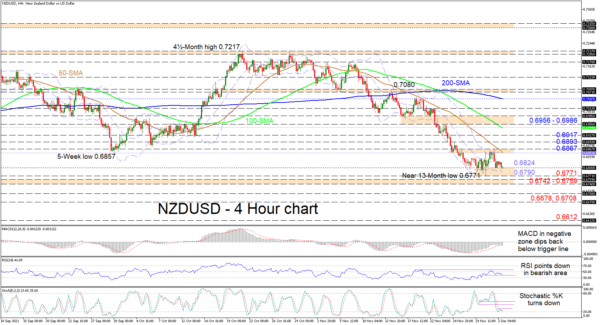