Dollar rises slightly in Asian session today, as markets await non-farm payrolls report from the US. Commodity currencies are generally lower despite to strong rebound in US stocks overnight. As for the week, Swiss Fran and Yen remain the strongest ones followed by Dollar. Aussie and Kiwi are the weakest. We’ll see how NFP would adjust market expectations on Fed tapering and rate hike, and thus trigger the movements in all financial markets.

US non-farm payroll report is back as a major focus for today, in particular with talk of faster Fed tapering in the background. Markets are expecting 525k job growth in November. Unemployment rate is expected to drop from 4.6% to 4.5%. Average hourly earnings are expected to have another solid 0.4% mom growth.

Dollar index is still holding above 95.51 near term support despite a correction in the past two weeks. Technically speaking, consolidation from 96.93 should be relatively brief and larger rise from 89.53 is likely to resume sooner rather than later. However, firm break of 95.51 could bring deeper pull back to 55 day EMA (now at 94.68) before DXY finds a bottom. 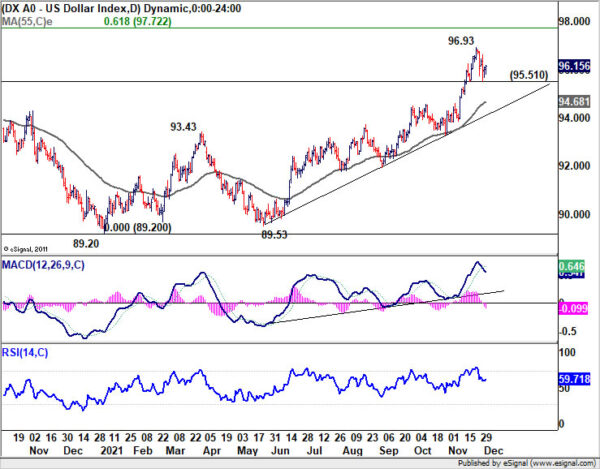 Fed Bostic: Finishing tapering before end of Q1 is in our interest

Atlanta Fed President Raphael Bostic said yesterday that with robust growth, an improving job market and inflation more than twice Fed target, having tapering finished “some time before the end of the first quarter” would be “in our interest”.

Bostic also referred to OECD’s projection that inflation in the US could be above 4% for the year of 2022. He said, “if it is at that kind of level, I think there is going to be a good case to be made that we should be pulling forward more interest-rate increases and perhaps do even more than the one I have penciled in.”

Fed Daly: Might need to start crafting a plan on rate hike

San Francisco Fed President Mary Daly said, “if we didn’t have higher inflation readings, you might let the economy go a little bit more to see if we can get through COVID and have those individuals come back.”

However, “right now, we’re dealing with inflation that’s above our target and inconsistent in its current readings with our longer run views on price stability,” she added. “We have to deal with that.”

Fed might need to start dialing down some of the extra policy accommodation and “start crafting a plan to, at least, you know, think about raising the interest rate,” she said.

Wang Zhe, Senior Economist at Caixin Insight Group said: “Overall, conditions in the manufacturing sector remained stable in November, while for the service sector, expansion occurred at a slightly slower pace. The downward pressure to the economy grew, and inflationary pressure was partly eased….

“The government’s measures to stabilize commodity supplies and prices significantly eased cost pressures on manufacturing enterprises, but had a limited impact on the reduction of costs to service enterprises. Overall, inflationary pressure remained.” 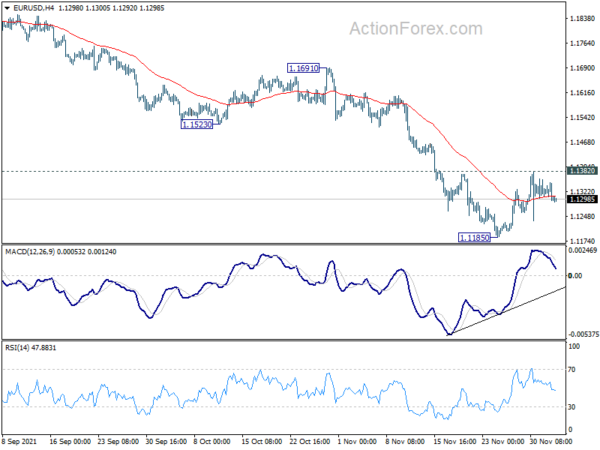 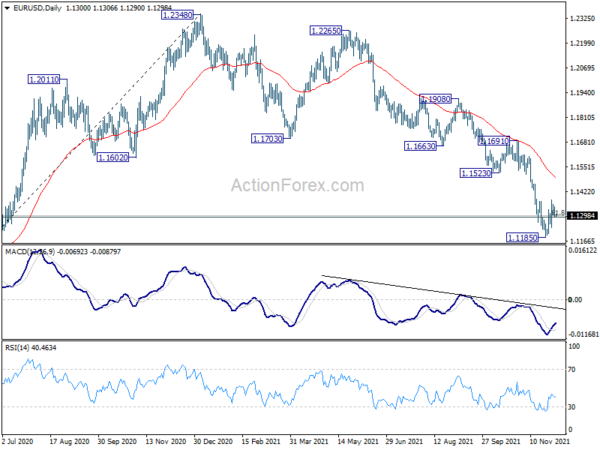