Global markets will enter the holiday season with a bang, as the upcoming week features five central bank decisions and a heavy barrage of data releases. The Fed will get the show rolling. It will decide whether to accelerate the tempo of tapering, although the dollar may be more interested in the new interest rate projections. The central banks of the Eurozone, United Kingdom, Japan, and Switzerland will meet as well.

Fed heads for the exit

The American economy is in great shape. Consumption is booming, the labor market is tight by several measures, inflation is scorching hot, and the Atlanta Fed GDPNow model points to growth of 8.7% in the final quarter. As such, the Fed has started to rotate away from the emergency policies it enacted last year.

It has already announced a gradual reduction of asset purchases but faced with an onslaught of impressive data lately, several policymakers want to speed up this process. A swifter conclusion would allow the option of raising interest rates earlier to fight inflation. 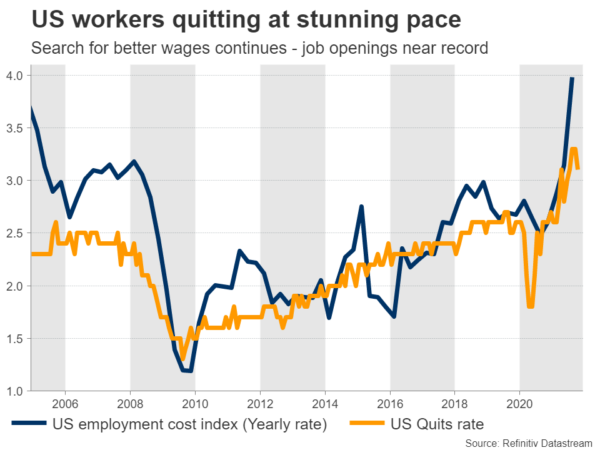 This will be a crucial decision when the Fed meets on Wednesday. Considering how many FOMC officials have voiced their support for accelerating tapering, there is a strong possibility it gets done. Market participants seem to agree, pricing in a 70% probability for a rate increase in May, which would require faster tapering to pull off.

But the most important variable for the dollar might be the updated ‘dot plot’ of interest rate projections. Back in September, the dots signaled equal chances for a single rate increase next year. Markets are currently pricing in three hikes, so the new dots will almost certainly be revised higher. The question is how much higher? 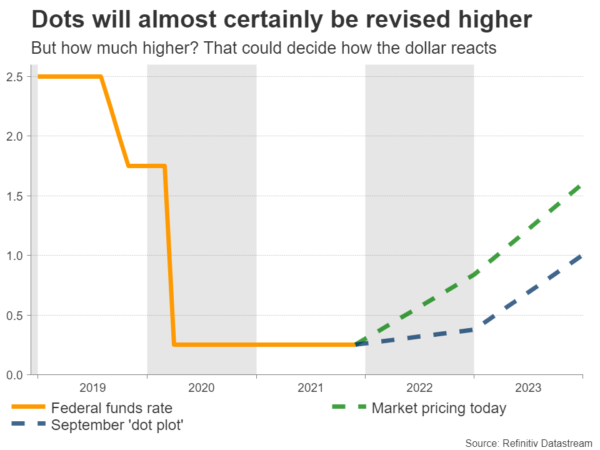 Will they signal one rate hike for next year or two? One would most likely be a disappointment for the dollar, while two could boost the currency by confirming that the Fed is moving closer to markets. It’s a close call, but considering the strength of recent data, a dot plot that points to two rate increases seems more reasonable.

A few hours ahead of the Fed decision, the latest retail sales numbers will be released.

The European Central Bank will also have some tough decisions to make. The economic recovery is still fragile, something exemplified by the latest covid restrictions. Yet inflation has fired up and the hawks are worried it could stick around.

In this light, the central bank will have to decide whether to beef up its regular asset purchases when the emergency purchases end in March. Not doing so would threaten to catapult European bond yields higher, something that even the hawks admit is too risky given the scary debt levels in southern Europe. 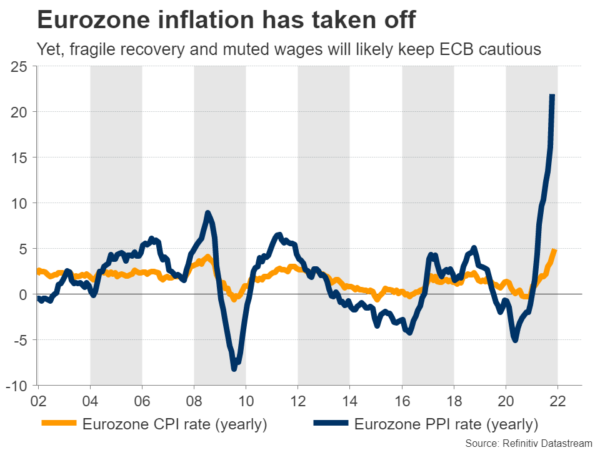 Therefore, it will be another battle between doves that want to retain maximum stimulus and the hawks that want to wind it down as far as possible, without shocking the bond market. The compromise could be to expand regular asset purchases but only by a fixed amount.

As for the euro, the picture still seems gloomy. While inflation has soared, growth and wage pressures remain muted, so the ECB will likely continue to suppress European yields for much longer than the Fed for instance. Money markets are still pricing a minor ECB rate increase for next year, which is unrealistic and allows scope for more pain in the euro as the central bank closes the door to that. 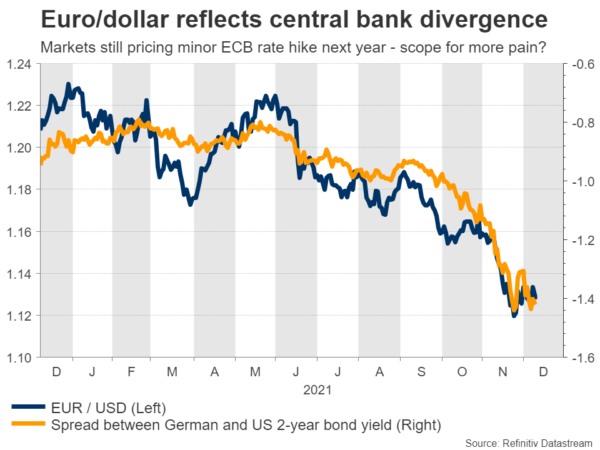 Besides the ECB decision, the latest PMI business surveys will also be released on Thursday.

BoE – No rate hike for Christmas

Traders have been grappling with when the Bank of England will raise rates for months. Policymakers including Governor Bailey initially hyped this prospect, but failed to deliver when the time came. The emergence of Omicron and the recent measures announced in the UK almost ensure the Bank will keep its powder dry this time too.

Even Michael Saunders, who voted for a hike last month, said he wants more details about the new variant before deciding. When hawks turn cautious, that is usually a powerful signal.

Markets have accordingly priced out the prospect of any action on Thursday, baking in just a 25% probability for a rate increase. This spells some downside risks for the pound if policy is kept unchanged, especially if that’s done by a unanimous vote. 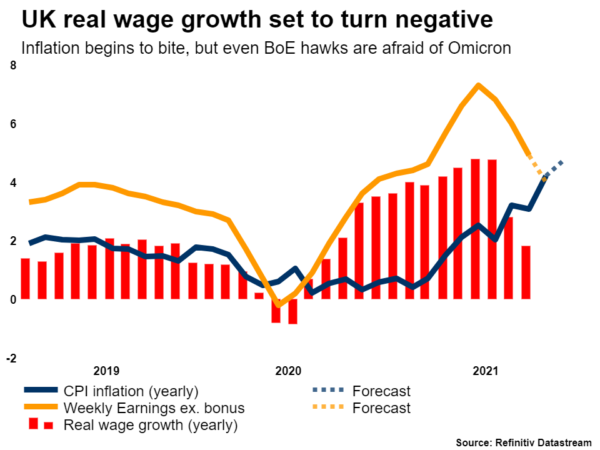 Beyond the initial reaction, sterling’s fortunes will depend on what the BoE signals about future hikes, as investors expect almost four of them next year. Admittedly, that seems like a stretch. The British economy is strong but not that strong.

We’ll find out exactly how resilient the economy is ahead of the BoE meeting. The latest jobs numbers will be released Tuesday, ahead of inflation stats on Wednesday and PMI surveys on Thursday.

BoJ a snoozer, but mind the SNB

Bank of Japan meetings have been a non-event for years now because market participants know that policy changes are not on the cards. The economy contracted in Q3 and has barely escaped deflation, so the BoJ will most likely stick to its yield-curve control strategy when it meets on Friday and be among the last to raise rates this cycle.

Hence, the yen will remain at the mercy of global forces. Specifically, how quickly foreign central banks raise rates and how risk sentiment evolves. In this sense, it’s difficult to be optimistic on the yen. On the data front, the BoJ’s Tankan business survey for Q4 will be released Monday. 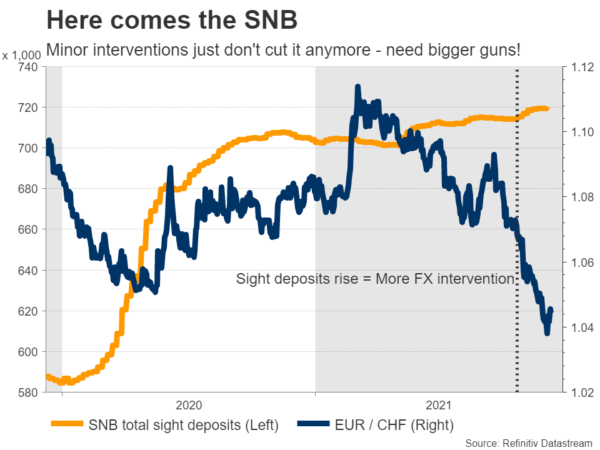 On the contrary, the Swiss National Bank meeting on Thursday could spark some fireworks. With covid restrictions threatening European growth, euro/franc has fallen to lows last seen in 2015, right after the currency peg was abandoned.

That’s a problem for the SNB, which has been fighting franc appreciation by constantly intervening in the FX market. Ergo, if it wants to turn this battle around, it needs to roll out even bigger guns. There isn’t much left in the armory, so policymakers may resort to threats of even stronger intervention to stop euro/franc from heading towards parity.

Data releases in Canada and Australia

Finally, Canada’s latest inflation data will hit the markets on Wednesday. The nation’s economy is running on all cylinders, however, the loonie has been trading entirely like a proxy for oil prices, with the correlation between the two assets being exceptionally strong lately.

In Australia, jobs numbers for November are out on Thursday. The aussie has found some relief from fading Omicron worries and recent stimulus measures in China. That said, pricing for RBA rate hikes remains somewhat excessive.

Speaking of China, the monthly data dump that includes retail sales and industrial production will be released Wednesday.