Dollar Firmer in Range as Focus Turns to FOMC

While Dollar is so far the strongest one for the week, there is clearly no follow through buying. The greenback is stuck in range against most others with traders on the sideline ahead of FOMC. Canadian and New Zealand Dollars are the two exceptions, which are already breaking through near term support against Dollar. We’ll see if other pairs would finally follow with breakouts.

Australia Westpac-Melbourne Institute consumer sentiment dropped -1.0% to 104.3 in December, staying in positive territory where optimists outnumber pessimists. Nevertheless, responses from states are rather different, with both NSW and Victoria posted significant falls (down 3.6% and 3.5% respectively) while sentiment was up in Queensland (3.4%), WA (3.2%) and SA (7.1%).

Westpac added that RBA’s meeting on February 1 will be a very important one with new economic forecasts. No action or commitment on interest rate is expected at the meeting yet. But RBA would lower the bond purchase pace from AUD 4B per week to AUD 2B per week.

“But what’s desirable is for the economy to recover steadily and push up corporate profits, thereby leading to higher wages and inflation,” he added. “We’ll patiently maintain ultra-easy policy to achieve this at the earliest date possible.”

Kuroda also said Japan is not in a state of “stagflation”.

“Generally speaking, the national economy maintained the recovery momentum in November, and the major macro indicators stayed within a reasonable range,” the NBS said in its statement. “However, we must note that the international environment is increasingly complex and severe, and there are still many constraints on the domestic economic recovery.”

Fed Chair Jerome Powell has clearly indicated that there will be a discussion about accelerating the tapering pace, and ending the asset purchases a a few months early. We’d expect Fed to announce a decision today, probably a double in the size of tapering to USD 30B per month.

The main focus will be more on the new economic projections, in particular the dot plot. Back in October, nine policy makers penciled in one rate hike or more in 2022 (six expected one hike and three expected two hikes), while nine expected no change. We’d probably see the interest rate projections shift even more towards the hawkish side.

UK CPI and PPI are the main focus in European session. Later in the day, Canada will also released CPI. US will release Empire State manufacturing, retail sales, import prices, business inventories and NAHB housing index. But of course, all focuses will be on FOMC.

USD/CAD’s break of 1.2852 confirms resumption of rise from 1.2286. Intraday bias stays on the upside for 1.2947 resistance next. Firm break there will target 1.3022 key medium term fibonacci level. On the downside, below 1.2781 minor support will turn intraday bias neutral first. But near term outlook will stay mildly bullish as long as 1.2604 support holds, in case of retreat. 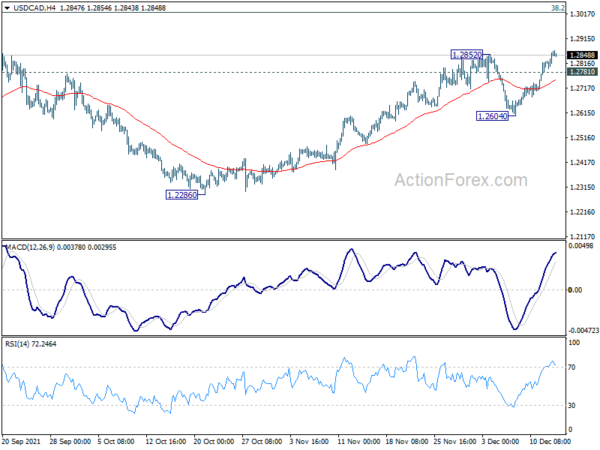 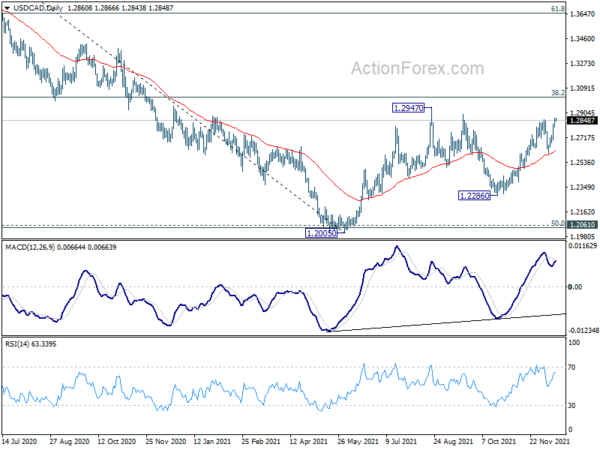