The US dollar is flexing some muscle as USD/CAD has started the week with considerable gains and is trading around 1.2950. The Canadian dollar had a rough week, losing 1.29%. USD/CAD is closing in on the symbolic 1.30 line, which was last breached in November 2020.

The Canadian dollar is a bellwether of risk sentiment, and the currency’s slide is an indication that risk appetite has fallen sharply. First, the Omicron variant is exploding in Europe, leading to a lockdown in the Netherlands and tighter health restrictions in other European countries. Omicron has also reached the US and we could see a spike in cases there also.

Another factor which has soured risk appetite was the news on the weekend that Democratic Senator Joe Manchin will not support President Biden’s Build Back Better spending package. Without Manchin’s support, the massive spending bill has no chance of being passed. Biden had been counting on passage of the bill by Christmas, as he is desperate for something to show voters who are frustrated over high gas prices and rising inflation and could take out their anger on the Democrats at next year’s mid-term elections. Now the Democrats will have to retreat and redraft a new bill that Manchin will accept.

Canada releases Retail Sales, the primary gauge of consumer spending. The markets are forecasting strong numbers for October, with a consensus of 1.0% for headline retail sales and 1.5% for core retail sales. This follows small declines in September. If the retail sales reports are within expectations, the Canadian dollar could break its current slide and recover some ground against the US dollar. 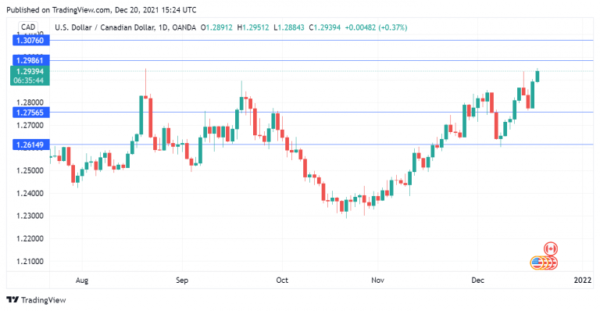