The US dollar has been roaring lately, capitalizing on the risk-off sentiment in the markets caused by the Omicron variant. This week, dollar bulls will be closely eyeing the barrage of the last major US data releases of the year. More specifically, the core Personal Consumption Expenditure (PCE) price index is out at 13:30 GMT on Thursday, which will be accompanied by several other key indicators, including Q3 GDP revision and durable goods orders. However, the upside potential for the greenback is limited since the ultra-hawkish rhetoric adopted by the Fed in the latest FOMC meeting does not leave much room for further positive surprises.

Core PCE creeps higher but does not spook markets

The core PCE index, which is the Fed’s favored gauge of inflation, is expected to follow a similar suit to the CPI rate, confirming that inflationary pressures intensified in November. According to the latest projections, the index, which excludes the more volatile food and energy prices, has jumped to 4.5% in November on a yearly basis from 4.1% previously. This figure is not only well above the Fed’s 2% target but it would also be the highest in 33. Moreover, the month-on-month rise is forecast at 0.4% and marks an eleventh straight monthly increase, which is an even more worrisome sign. 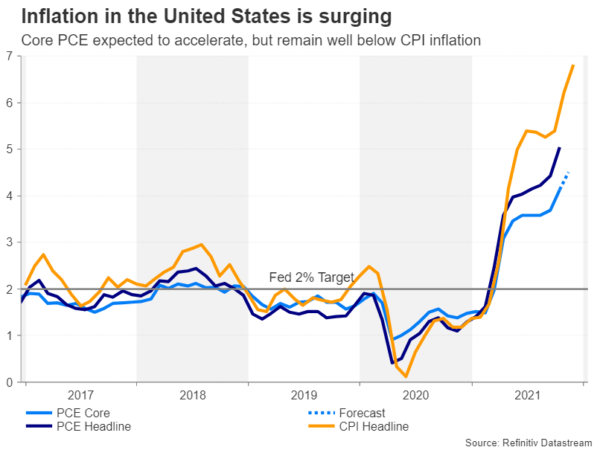 In response to growing concerns about inflation getting out of control the Fed accelerated the pace of its tapering program and signaled a more aggressive rate hike timeline at last week’s policy meeting. Nevertheless, as long as inflationary pressures keep stemming from supply chain bottlenecks and surging energy prices, the tighter US monetary policy will probably not significantly weigh on inflation as it cannot resolve any of these issues.

Income and consumption remain key factors for the economy

Personal income and consumption figures usually serve as substantial indicators of the overall condition of an economy. In the upcoming US PCE release, personal income is forecast to have risen by 0.4% m/m following a 0.5% increase in October. The main driving force behind this continuing surge might be the constantly increasing compensations deployed by businesses to lure employees to return to their jobs.

Furthermore, personal consumption is projected to have climbed by 0.6% on a monthly basis, slowing from the prior 1.3% rate. Despite the expectations of solid spending growth in November as the holiday season approaches, the earlier start of holiday shopping due to fears of emerging restrictions may have slightly undermined November’s consumption figure. 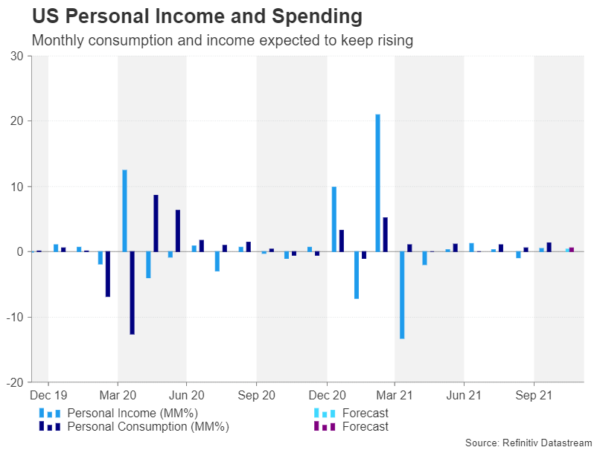 Apart from the PCE print, durable goods orders will also be watched on Thursday, alongside the Q3 GDP revision. Durable goods orders are forecast to have risen by 1.6% in November, bouncing back after the 0.4% pullback in October, led mainly by a sharp jump in orders for civilian aircraft and cars. In addition, the Q3 GDP growth figure is expected to remain unchanged at 2.1% but this data point is of no particular interest as it refers to a period well before the Omicron variant emerged.

From a technical perspective, the dollar index is set to finish 2021 strong, fuelled by the Fed’s more hawkish stance versus most major central banks, alongside the long-lasting Covid-19 woes that increase its safe-haven demand.

Should a stronger-than-expected PCE report ignite further buying interest, the dollar index could ascend towards the 2021 high of 96.94.

Alternatively, in the negative scenario, bearish forces might push the price towards 95.85, a violation of which would shift the spotlight to 94.60.