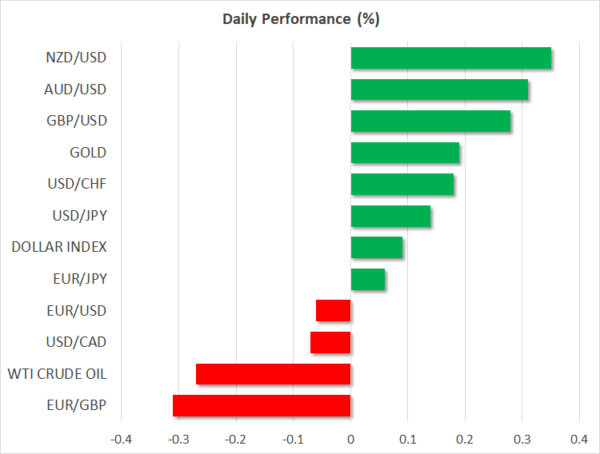 Virus defences are going up around the world as the Omicron variant spreads at a breakneck speed, plunging many nations back into lockdown, whilst those that haven’t yet shut down parts of their economies, are likely to do so after Christmas. Yet, stock markets have made a remarkable rebound this week and the incredible year-to-date gains have mostly stayed intact, particularly on Wall Street.

Investors are feeling upbeat again, clearly encouraged by the growing evidence that Omicron isn’t as severe as previous strains. Two separate studies out of the UK and South Africa in the last 24 hours back the initial findings that Omicron leads to fewer hospitalizations and deaths than the Delta variant.

The caveat here is that even if Omicron is less dangerous, the fact that it is so much more transmissible means that health services are still at risk of being overwhelmed by the surge in new infections. But hopes are high that the fast rollout of booster jabs in many countries will keep hospitalization rates manageable, avoiding the need for tough or prolonged lockdowns.

Nevertheless, bond markets have been somewhat at odds with the optimism in equities as long-dated yields have pulled back substantially ever since Omicron came into the fold. Moreover, markets may be overlooking the risks to inflation from further virus-induced disruptions to supply.

With central banks such as the Fed slowly turning off the stimulus taps and President Biden’s $1.75 trillion spending bill hanging in the balance, it probably won’t take much to spark another panic in the markets. But for now, stocks globally are enjoying another positive day, led by strong gains in Asia and a solid open in Europe. US stock futures are up too, though Nasdaq futures are flirting with the negative region.

Riskier currencies extend rebound but dollar edges up too

In the FX sphere, the US dollar edged marginally higher against a basket of currencies, recouping some of yesterday’s losses, amid thin trade ahead of the holiday weekend. The dollar index is being shored up by the typically sluggish euro, which has been unable to capitalize on the improved sentiment or remarks by an ECB policymaker who suggested that an end-of-year rate hike in 2022 was a possibility.

The safe haven yen and Swiss franc were weaker too, but the risk-sensitive currencies all climbed to fresh highs against the dollar.

The Australian and New Zealand dollars were both up about 0.3%, having broken through key levels versus the greenback yesterday.

The Canadian dollar lagged its peers, firming only slightly as oil prices took a breather from a two-day rally.

Still, despite the latest bounce backs, all the major currencies are headed for yearly losses against the dollar, with only the loonie being in a position to change things around in the remaining trading days of the year as it’s down less than 1%.

PCE inflation eyed; will it spark a pre-Christmas scare?

Coming up later in the day, a flurry of US data releases should keep the excitement going before Wall Street traders break up for the festivities. The core PCE price index, personal income and spending numbers, as well as durable goods orders are all due. Aside from the PCE inflation figures, the other data for November may be seen as somewhat less relevant as they are pre-Omicron.

It’s questionable if even a stronger-than-expected increase in the core PCE price index poses a significant threat in upsetting markets following Fed Chair Powell’s very reassuring performance at the last FOMC meeting. But traders should nonetheless be wary of some sharp moves amid the low liquidity. 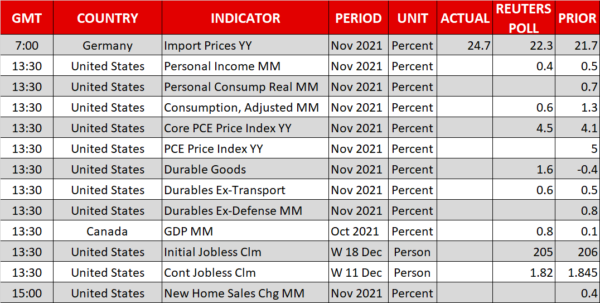